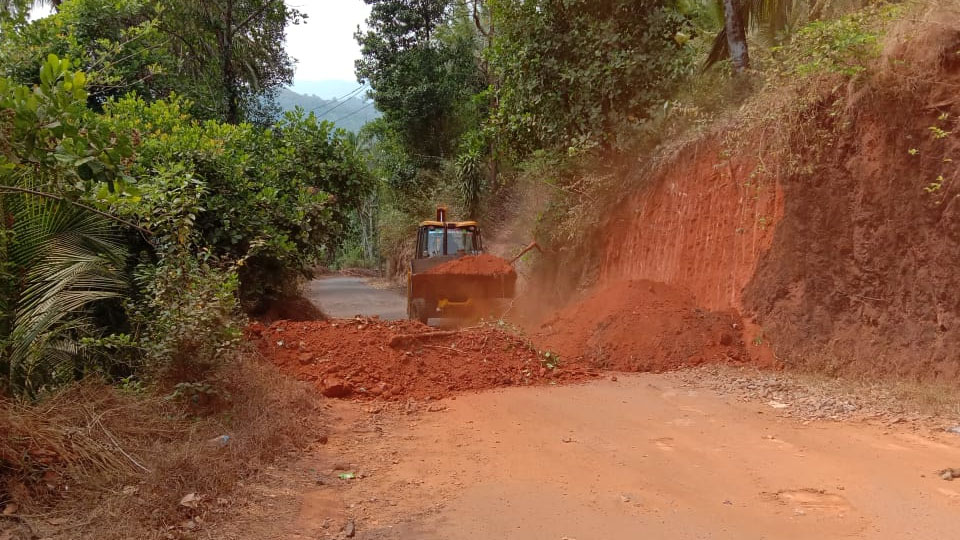 Mysore/Mysuru: Kerala Chief Minister Pinarayi Vijayan has written to Prime Minister Narendra Modi seeking his intervention to lift the blockade of the Thalassery-Kodagu State Highway-30 by the Karnataka Police.

However, this move is opposed by the MLAs and MP of Kodagu who have urged the Karnataka Government not to lift the blockade as there is a danger of Coronavirus spreading in Kodagu by carriers from Kerala that is badly hit by the killer virus.

The blockade has stopped inter-State traffic, including those of vegetables and essential supplies, resulting in a pile-up of at least 150 fully-laden trucks bound for the Consumerist State of Kerala.

The Karnataka Police has enforced the blockade as a preventive measure as Kasaragod, a district in Kerala, has witnessed a spike in the number of coronavirus cases. Kasaragod, shares a border with Karnataka.

The district saw an unprecedented spike in infections with 34 cases being reported last Friday, the highest for a single day yet in the State, mainly from primary contacts of two virus carriers who returned home from abroad.

The Kerala Chief Minister said in the letter that the Thalassery-Kodagu State Highway-30 connects Kerala with Kodagu in Karnataka at Virajpet. The route is a lifeline for flow of essential commodities into Kerala. “If this is blocked, vehicles carrying essential commodities will have to travel a much longer route to reach our State.”

Given the situation of the national lockdown, this will add even more to the hardship of the people of Kerala. “You will agree with me that no action impeding the movement of essential commodities should be initiated at this moment of crisis,” the Chief Minister said in the letter.

He requested the Prime Minister to urgently intervene in this matter so that smooth flow of essential commodities resumes to Kerala, which is fighting COVID-19 on a war-footing along with the rest of the country.

The Kerala Chief Secretary is learnt to have taken up the matter with his Karnataka counterpart on Friday itself, and the latter had promised prompt action to clear the blockade on the narrow inter-State road.

Now that Kerala is demanding opening of these points, Virajpet MLA K.G. Bopaiah, Madikeri MLA Appacchu Ranjan and Mysuru-Kodagu MP Pratap Simha have jointly appealed to the Karnataka Government, Kodagu DC and SP not to succumb to the pressure tactics by Kerala. “Let the borders remained sealed till the outbreak is contained,” they have demanded.

“So far, Kodagu has seen only one positive case and if the borders with Kerala are open, there will be many virus carriers from Kerala as Kasaragod is heavily infected. We want to remain virus-free and we don’t have good hospitals in Kodagu to handle the virus cases,” MLA Bopaiah reasoned.

MP Pratap Simha has stated that Kerala can use three entry points to Karnataka – Mangaluru to Kasaragod, Mysuru to Manandavadi via H.D. Kote and Gundlupet to Sultan Batheri via Muthanga. Thanking Karnataka CM B.S. Yediyurappa, Simha has tweeted:  “Thank u @CMofKarnataka for agreeing to continue the complete blockade of Kerala border from Coorg. Now it’s time to completely block the border from Mysore and Chamarajanagar districts.”