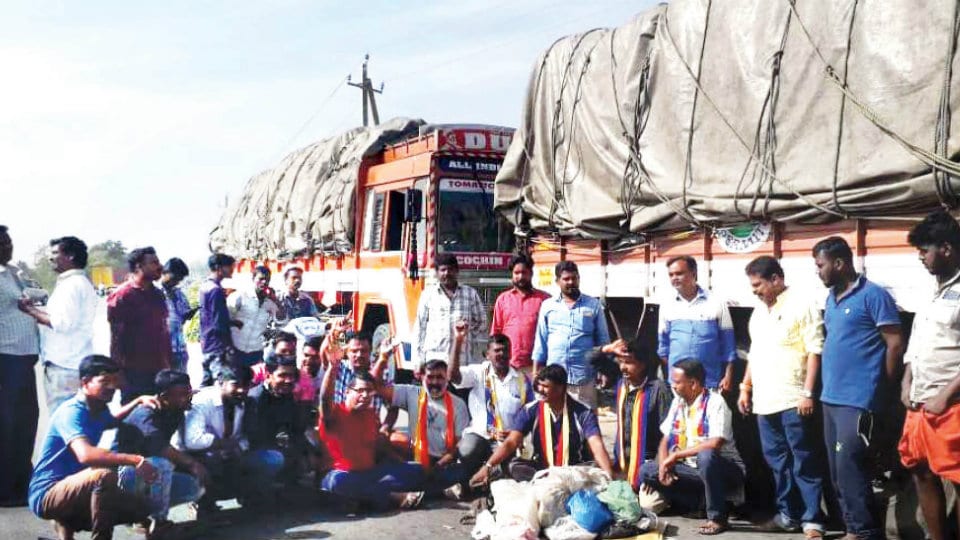 Mysuru:  Kerala that is facing a huge crisis in solid waste management has found a convenient way of getting of waste: Dump them in Karnataka.

Even as the Mysuru City Corporation (MCC) is seeking public cooperation in a bid to reclaim the Cleanest City tag in India, it is facing a daunting task this time as many waste-carrying trucks are regularly coming from Kerala to dump their load on the outskirts of the city. Due to negligent attitude of the personnel at various inter-State check posts, trucks carrying large quantity of waste from Kerala are dumping the same on the city outskirts.

Trucks carrying plastic waste, packing materials, medical waste and other non-biodegradable waste from Kerala, which entered city outskirts through various inter-State check posts, have been dumping waste at private lands near Jayapura. Huge pits have been dug up at the private land to bury the waste.

Recently, a truck carrying a heap of garbage was seized near Nanjangud Road. The MCC officials had received a tip-off. But by the time they reached the spot, the driver had escaped. The truck was registered in Kerala.

KRV activists alleged that officials at the check posts are taking bribe and allowing the trucks to pass from Kerala to Karnataka. They demanded that CCTV cameras must be fixed at the check posts. When the authorities examined the trucks, they found that the waste was neatly packed and the entire load was covered with tarpaulins to hoodwink the check post staff.

Sources said that some people, who own lands in city outskirts, were making money by allowing the waste to be buried in their land. Though cases were registered in Mysuru and Chamarajanagar districts on trucks dumping waste, these trucks have turned many stretches into landfills. Residents alleged that despite such things taking place right under the nose of the Police and officials of various departments, no action has been taken.

Jaggery units use waste as fuel

Make Hay While Sun Shines goes an old adage. Jaggery producers in Mysuru and Mandya are making the best use of the situation where tonnes of waste are being dumped by trucks coming from Kerala. They are using the waste to generate fuel at their factories, known as aalemane, due to scarcity of firewood.

Jaggery production units use material waste as fuel though the waste is hazardous as it contains plastics, slippers and bags. The fuel is used to boil sugarcane juice in big vessels, turning them into jaggery.

This activity came to light when Karnataka State Pollution Control Board (KSPCB) authorities recently raided several jaggery producing units in Mysuru and Mandya on complaints by villagers about the plastic burning smell and the resultant pollution.

Authorities found that the owners of the jaggery units got cheap waste from Kerala. They also found waste-carrying trucks from Kerala reaching remote villages of Mysuru and Mandya where the waste was dumped near jaggery units. As there is a great demand for jaggery, there are hundreds of units which have taken up this task. Pollution Control Board officers have raided several units and seized garbage trucks as well as units.