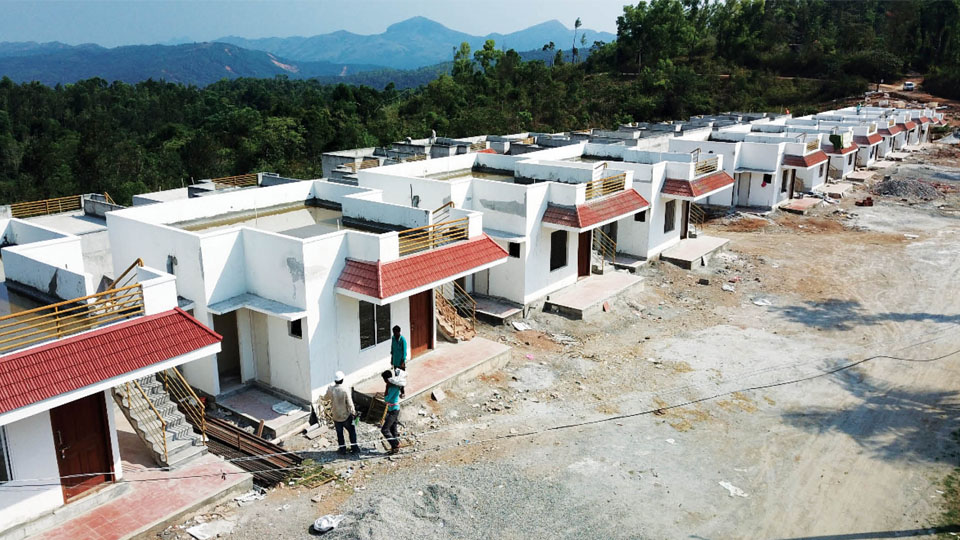 Madikeri: With the Southwest Monsoon expected to set in around June 2 in Kerala, fear and dread had gripped the people of Kodagu this year too.

Residents of the district which was ravaged by landslips and floods last year — are bracing for the rain with caution even as the district administration has put in place men and material to cope with any emergency.

It has been nine months since Kodagu was ravaged by floods and landslides. Twenty people were killed and a staggering 3,000 displaced. Landslides and floods destroyed crops of nearly 33,548 farmers besides public infrastructure like roads and bridges. Those whose houses were completely destroyed are still living in rented houses.

The Kodagu district administration estimates that about 836 houses were destroyed — of which 427 were completely wiped out and displaced. Now, only about 115 are nearing completion at Jambooru, Karnangeri and Made, according to Additional DC in-charge of rehabilitation T. Javaregowda.

Of the 427 houses, 35 are being built in Karnangeri, 80 in Made, and around 300 in Jambooru-Madapura villages. He said Infosys has also chipped in and is constructing around 200 houses.

By the onset of monsoon, 115 houses, which are 2BHK, might be ready to be handed over to the beneficiaries, but for the rest, the wait will continue.

The State Government is building houses at a cost of Rs. 9.8 lakh on 30x40ft plots. Of the total 770 families who are eligible for houses, 43 have sought cash to build their own houses and the government has agreed to release funds in four equated instalments.

Last year’s disaster razed about 3,000 acres of coffee estates mainly in about 15 villages of Madikeri and Somwarpet taluks. Around 200 coffee planters who have been in the business for generations have been hit hard. They are still awaiting land in lieu of property lost.  The Kodagu district administration says a total Rs. 33 crore was paid as compensation to 33,548 farmers/planters.

The government has also been paying house rent of Rs. 10,000 to all those who lost their houses. This compensation will continue till they are allotted houses.

The district has taken various measures to cope with any exigencies arising out of natural disasters and has constituted committees to deal with the same. It has also urged the public not to panic over speculations of fresh outbreak of any natural calamity.

The district recorded its highest rainfall in over 80 years in 2018. But at a recent meeting in Madikeri, officials from the Karnataka State Disaster Monitoring Centre (KSNDMC) ruled out a recurrence of such heavy rains. 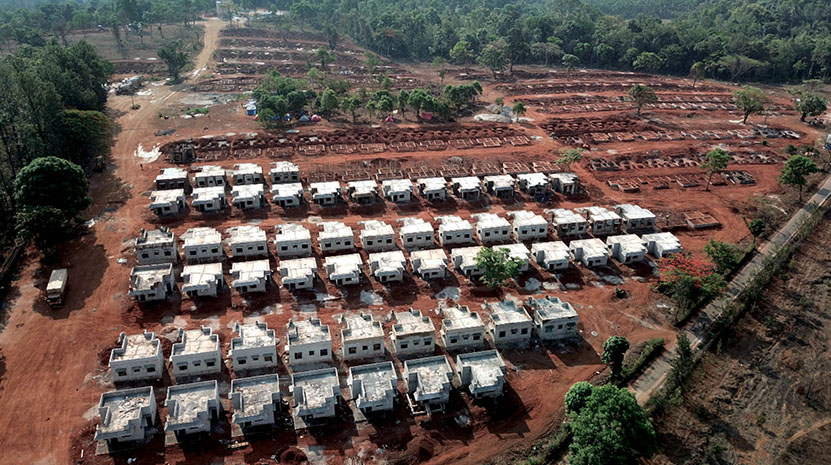 But residents are sceptical of the officials’ claim and there are fears among the locals that the soil is saturated and there could be fresh landslips. These concerns stem from the fact that the district receives an annual rainfall of nearly 2,800 mm.

The district administration had strengthened response mechanism in case of a natural calamity. Consequent to last year’s disaster, the authorities have identified areas which are prone to such events and an Emergency Relief Response and Recovery Committee has been constituted.

Specific Official Committee have been constituted to ensure nutrition in shelters, relief management, animal protection and carcass management,  damage assessment, early warning and evacuation committee, Search and Rescue Committee, First Aid, Mass Casualty Management Committee, Reconstruction and Rehabilitation Committee among others. Such committees have been established at taluk and Gram Panchayat levels as well, according to the officials.

Based on the reports of the Geological Survey of India, vulnerable areas prone to landslips have been identified and retention walls have been strengthened or constructed to prevent or minimise the impact of soil erosion and landslips in Madikeri town and other areas.

Apart from such measures, officials have been barred from going on long leave except emergencies. Officers have been directed to keep track on daily rainfall report, feedback from public from vulnerable places on any kind of strange sounds that are heard in their vicinity and complaints of mobile network issues.

The district administration will regularly reviews such reports on every fortnight to assess situation and take damage control exercise.

WhatsApp group of officers have been created to exchange information and get feedback according to Deputy Commissioner Annies Kanmani Joy.

In addition, a team of National Disaster Response Force (NDRF) has been allocated to the district and it will be deployed by the end of May which will conduct rescue exercises in areas that were badly affected last year.

The district administration has also taken steps to ensure medical assistance in case of any emergency.

Kodagu cops from Madikeri, Virajpet, District Armed Police were also trained to handle disaster management and tackle any eventuality ahead of monsoon this year. In the event of heavy rains, temporary relief centres have been identified to evacuate people living in such houses. 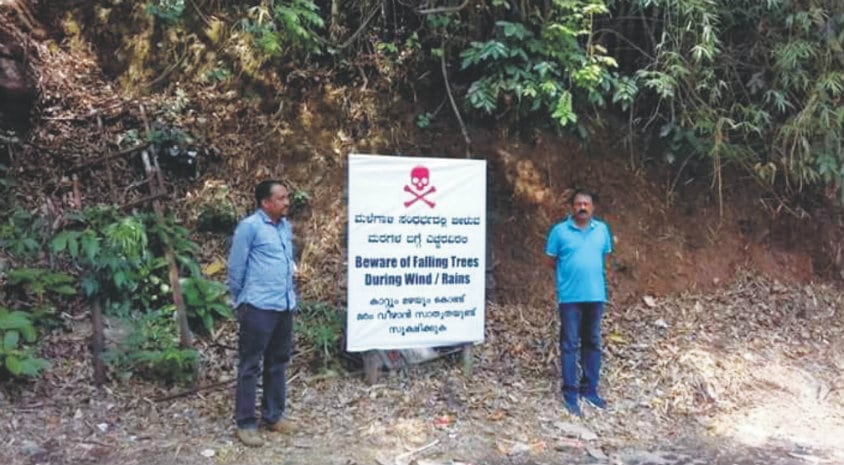 Warning boards greeting tourists and visitors to Kodagu near Makutta Gate. The boards are erected by Public Works Department cautioning people about tree falls and landslides.

The Geological Survey of India has submitted a report identifying a few places in Jodupala and Makkanduru vulnerable to landslips and the permission for housing and reconstruction has been denied in these places. Besides, 409 houses have developed cracks and have been declared vulnerable.

A team of scientists from Geological Survey of India, which has conducted extensive studies, has identified some areas prone to natural disaster.

The district administration has made a list of villages which come under “sensitive areas” and has made all preparations to take precautionary measures.

If the government approves the proposal, the people residing in hilly regions are likely to be shifted to safer places. The people of 2nd Monnangeri, Kartoji, Ramakolli, Jodupala have expressed their willingness to shift to temporary houses.