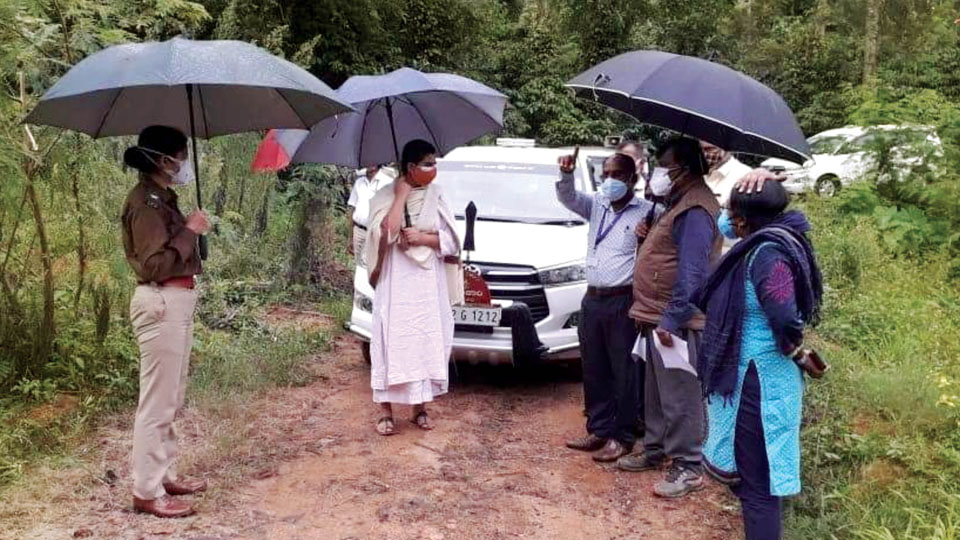 Madikeri: With back-to-back floods and landslides in the hilly terrain of Kodagu district since 2018, the District Administration is bracing ahead of time for any eventuality during monsoon and has chalked out a detailed plan of action.

Getting onto the field are Deputy Commissioner (DC) Charulata Somal, Superintendent of Police (SP) Kshama Mishra and Additional Deputy Commissioner (ADC) Raju Mogaveera and a battery of officials who are personally supervising the arrangements in landslide and flood-prone areas.

While in April, they led a series of disaster preparation drills with State Disaster Response Force (SDRF) at Talacauvery and a few areas where landslides are common, this month their focus is on shifting the vulnerable population from the landslide-prone areas.

During the mock exercise, it was demonstrated how rescue efforts have to be carried by the teams amidst calamities. The possible devastation has been discussed along with preparedness so that there is no last-minute panic.

The National Disaster Response Force (NDRF) is already there in the district and the team is coordinating with SDRF and also other rescue and relief teams like the Fire Department, Home Guards and the Police. The District Administration has prepared the District Disaster Management Plan for bringing into effect preventive and mitigation measures whenever necessary, and chalked out an action plan for the reconstruction and rebuilding.

On May 22, the DC, SP and team visited T. John Layout, Kaveri Layout and Muliya Layout in Madikeri taluk; on May 26, they visited Suntikoppa, Kandanakolli, Halleri, Madapura and Jambur in Somwarpet taluk and on May 28, the team visited Bethri, Thora, Kondangeri, Halgunda and Karadigodu in Virajpet taluk.

The places in Virajpet taluk are by the side of River Cauvery and whenever the River swells, people are moved out. This is an annual exercise and people have not moved out of the place despite the Administration allotting alternative land. They have continued this practice with the blessings of certain elected representatives and vested interests. The authorities have already identified vulnerable areas where houses collapsed due to heavy rain for three seasons. Areas have been divided into very high to extreme flooding zone, high to very high risk zone.

Meeting various teams, the DC said the monsoon will be accompanied by flood, landslides and disruption in power supply. Measures should be taken to solve all the problems. The officials should work in coordination.

She said the officials should take all precautionary measures to tackle any eventualities. The vulnerable areas should be identified and a list should be provided to the District Administration. The officials should submit a report on the loss of agriculture and horticulture crops following rains. Action should be initiated to open relief centres in schools. The relief centre should have a supply of hot water and toilet facilities, she added.

The DC directed CESC officials to replace old electricity poles. The Forest Department should clear the fallen trees and the PWD and Zilla Panchayat (ZP) engineering officials should focus on roads where landslides must be cleared immediately. Most importantly, the CESC officials should ensure that there is no disruption in the power supply to COVID Hospitals where patients are dependent on power supply to breathe.

All precautionary measures should be taken prior to the onset of the monsoon. The officials should make arrangements for opening relief centres, she said. The families residing in vulnerable areas should be shifted to safer locations, she told Revenue Department officials.