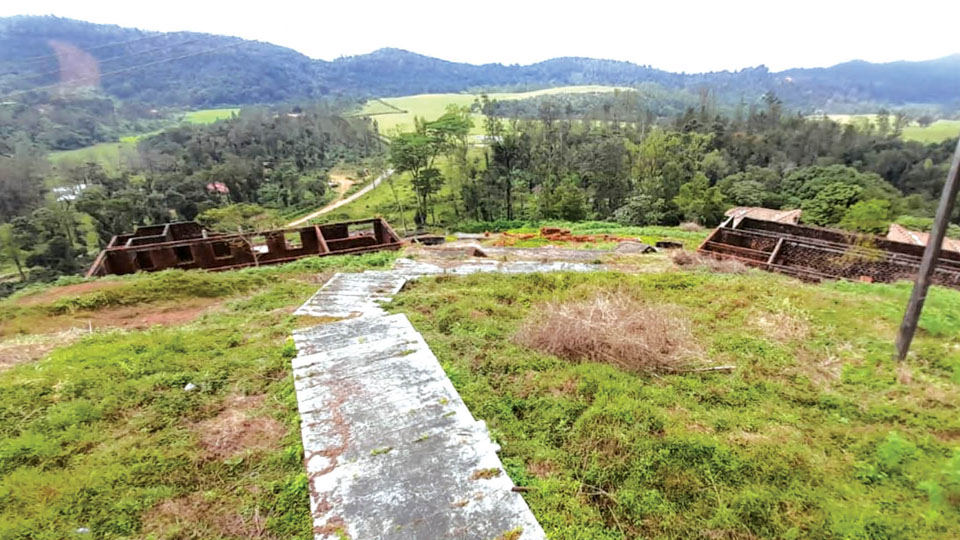 Works remain incomplete even after 15 years

Mysore/Mysuru: Kodava Heritage Centre, the ambitious project of the Central Government envisaged over 15 years ago to showcase the unique tradition of Kodavas, is still in limbo.

This proposed Centre coming up near Vidyanagar in Madikeri was to be built on the lines of the traditional Kodava Ainmane and highlight the rich tradition, customs and social ethos of Kodavas. This Centre, when completed, would have been a valuable centre of studies featuring the cultural heritage of Kodavas, but due to gross negligence of elected representatives and the authorities concerned, the project is abandoned midway.

The budget being allocated for the project is sky-rocketing year by year, but the work is yet to take off from where it was stalled. And the reason for this sorry state of affairs is the private contractor and the Public Works Department (PWD) which had been entrusted with the work.

The estimated cost of the project in the beginning was  Rs. 88.75 lakh, but now it has escalated to Rs. 3.30 crore. The State Government had handed over the construction work to PWD on May 27, 2020 to be completed within a span of 12 months. But due to Corona pandemic and heavy rains, the work has again come to a grinding halt.

Initially, when this ambitious project was launched over 15 years ago, the Ministry of Tourism at the Centre had agreed to provide grants. Though the project was launched by the State Government it soon came to a standstill. Surprised and upset over the undue delay in the execution of the project, even the Kodagu Deputy Commissioner had intervened and ordered the officials to expedite the project, but it still remains far from completion. This shows the apathy of those involved in the execution of project.
Structure in dilapidated state

There were complaints of poor quality work while some had also raised objection accusing the authorities of improper planning and architecture. Over the last 15 years, the red bricks used for construction have come apart. Unable to withstand the vagaries of nature, the incomplete walls have become dilapidated. From years of neglect and disuse, wild grass has covered the bare walls. The construction site has now been reduced to a ramshackle structure with tall weeds covering the whole area, just like the neighbouring thick forests.

A few walls have collapsed and the granite laid on the steps have broken down. As a proof of shabby work, cement pillars have cracked down at various places. Heaps of Mangalore tiles and broken woods lay scattered all over the place. Granite stones, wooden planks used for roofing and tiles have been stolen by some miscreants.

Even the local Kodava organisations and elected representatives do not seem be bothered about the progress of the structure. As a result, from the last 15 years, the construction work has still remained incomplete.

On Nov. 27, 2018, the PWD had intervened and blacklisted the contractor for stopping the work halfway, but the Department is yet to receive Rs. 42 lakh excess money that had been paid to the negligent contractor. Yet, all these seems to be just another eye-washing tactic by the persons involved.

Now, works on Government buildings like Zilla Panchayat Bhavan, District Court Complex and Kendriya Vidyalaya that were taken up around the proposed Kodava Heritage Centre in Madikeri are going on at a brisk pace. Surprisingly, all these three buildings are being built in a shorter time than that of the Heritage Centre and cost of these works amounts of crores of rupees.

With the Heritage Centre project lying in limbo for 15 long years, people are wondering whether the project, which is expected to become a major tourist attraction when wholly executed, will be completed at all. The people are also questioning the commitment of the political leaders of the district.

READ ALSO  With three of family dead, this youth has to rebuild his life

Unfortunately, the otherwise unique structure now has become an eyesore with heaps of M-Sand, red bricks and Mangalore tiles scattered all over the place.

Project to be completed by March 2021

Construction work of the proposed Kodava Heritage Centre has now been handed over to Grade-1 contractor Kishore Babu. The cost of this work is around Rs. 1.5 crore, but due to heavy rains and Corona pandemic, the work could not be taken up till now. The work will begin after Madikeri Dasara and we have instructed the contractor to complete construction work by the end of March 2021. As the roofing work was incomplete, heavy rains have damaged the red brick wall and as a result, the construction cost might go up in the coming days. – Shivaram, Asst. Executive Engineer,  Public Works Department

What about remaining work?

The present contractor Kishore Babu for Rs. 1.5 crore will only complete the tiled roof and flooring. What about the remaining work? It is learnt the project to complete in toto before handing the building over to the State Tourism Department would need few more crores of rupees. Fear is that the project will get into limbo once again unless some Kodava Organisation monitors the progress and pursues it with the Government.

As an example it may be mentioned that the Gen. K.S. Thimayya Museum is shaping up so well and set to complete soon by the Contractors Nirmiti Kendra, because the project is overseen by the NGO Field Marshal Cariappa-General Thimayya Forum with Air Marshal Nanda Cariappa, Major Bidanda Nanjappa and Col. Subbaiah, its President.