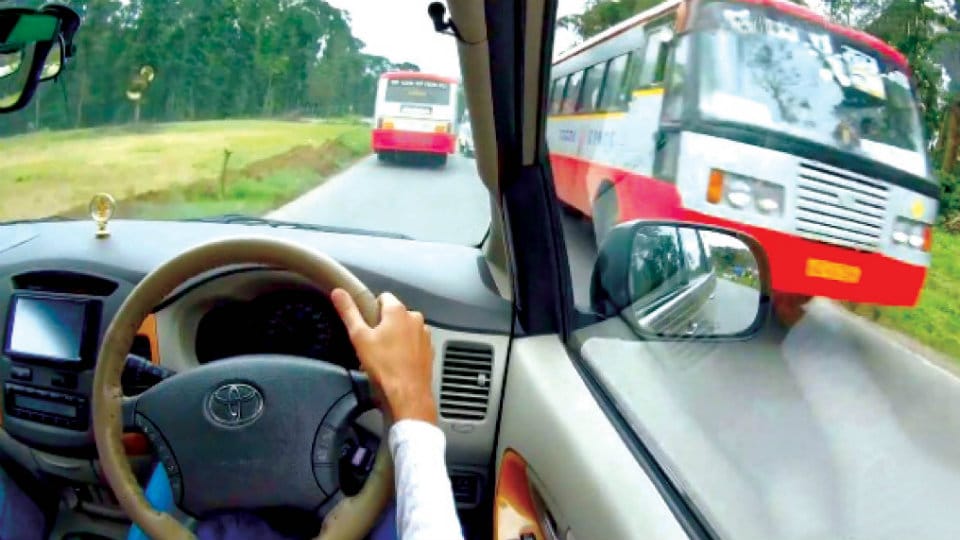 KSRTC to have sensor system to alert sleepy drivers

Mysuru/Bengaluru: Overworked and stressed out Karnataka State Transport Corporation (KSRTC) drivers are resorting to drastic measures to keep themselves awake in the course of their round-the-clock duty. They use pepper, Vicks and chillies to avoid falling asleep while driving.

Often, long-distance services of the KSRTC meet with accidents as sleep-deprived drivers are made to work putting the lives of several people at risk. Not anymore as the KSRTC authorities are planning to install Artificial Intelligence (AI) systems on the front bumper of buses to avoid collisions and alert sleepy drivers.

KSRTC officials said that the sensor fitted at the front bumper of the bus continuously monitors objects in the range of up to 180 feet and cautions the bus driver with a beep or an alarm, in case of any danger of collision. Another sensor fitted near the headlight handle cautions the driver in               case of napping.

“The driver needs to wave his hand across the sensor at regular intervals, which can be customised, and if he does not perform the action, the system concludes that the driver is sleepy or inattentive and it cuts off the accelerator. One he waves the hard, the accelerator is resumed immediately,” officials explained.

Some private transport companies in Karnataka have already implemented the system where long-distance luxury buses are fitted with sensor-based equipment and where the driver is expected to wave at the equipment every three to four minutes. If the driver fails to do so, then the equipment emits loud alarm, waking up the sleepy driver.

KSRTC officials said that Uttar Pradesh and Karnataka will be the first two States to install such sensor-based AI systems on the front bumper of buses to avoid collisions and alert sleepy drivers.

While Uttar Pradesh State Road Transport Corporation (UPSRTC) is planning to install these systems in its fleet of over 12,500 buses, KSRTC will install them in over 500 buses, which primarily ply on long routes and during nights.

Officials said the AI system will enhance drivers’ safety in case they fall asleep or get distracted. There have been several instances of drivers tending to ignore drowsiness and causing accidents, especially on long-distance trips at night. This new system will ensure passengers’ safety as well, officials added.

The pilot run of this system has been very encouraging and officials were having a trial run since the last one year to assess the efficiency of the system and the results are encouraging. Officials said there have been no accidents involving the buses fitted with AI technology. The technology has been provided by Mumbai-based start-up Sixth Sensor Technology.

KSRTC State Transport Department
No one from my family will contest K.R. Pet by-poll: HDK
MCC on the verge of bankruptcy, alleges former Mayor