Home » News » No one from my family will contest K.R. Pet by-poll: HDK 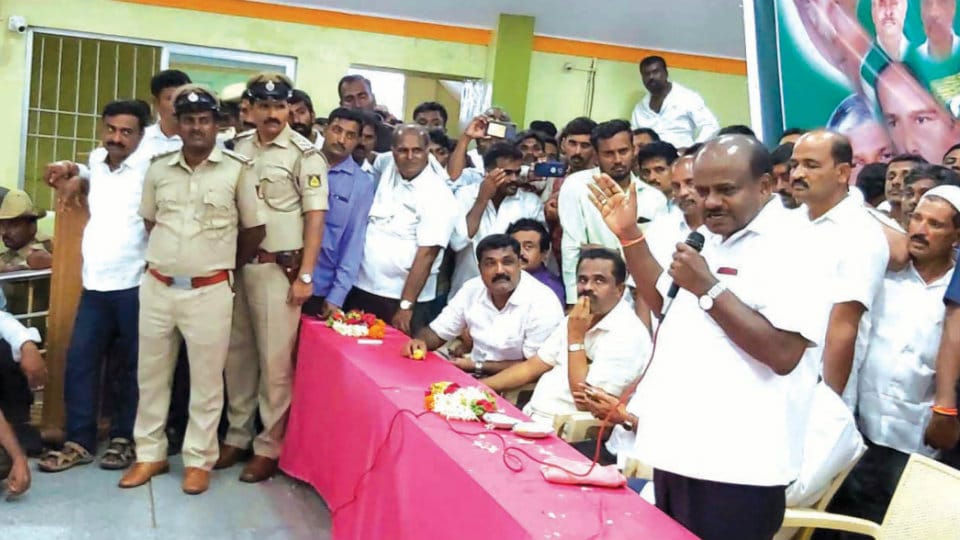 No one from my family will contest K.R. Pet by-poll: HDK

K.R. Pet: Asserting that no one from his family was going to contest K.R. Pet Assembly segment by-poll, former Chief Minister H.D. Kumaraswamy (HDK) maintained that the choice of the JD(S) candidate for the seat will be based on the decision of local leaders.

Addressing party workers at a Kalyana Mantap in K.R. Pet town yesterday, Kumaraswamy clarified that he had called the party workers meeting only to hear them and not to pick the party candidate.

Dismissing reports on the possible contest of Prajwal Revanna, Nikhil Kumaraswamy and other H.D. Deve Gowda family members as media speculations and there was no truth in them, Kumaraswamy said he had left to the local leaders to pick the party candidates for the possible by-polls from all the 17 Assembly segments, in which the sitting MLAs were disqualified by the then Assembly Speaker.

Terming disqualified JD(S) MLA K.C. Narayana Gowda as a criminal, HDK accused him of bringing his sister’s family on the streets.

Maintaining that power was not his priority, he claimed that he was still in politics for the sake of people and that he does not have any desire to continue in politics. Asserting that the JD(S) will never join hands with other political parties, he said that neither Chief Minister B.S. Yeddyurappa nor CLP leader Siddharamaiah will come to the rescue of poor people.

Earlier, speaking at Hassan, HDK blamed the media for his son Nikhil’s downfall in politics and the collapse of the JD(S)-Congress coalition Government.