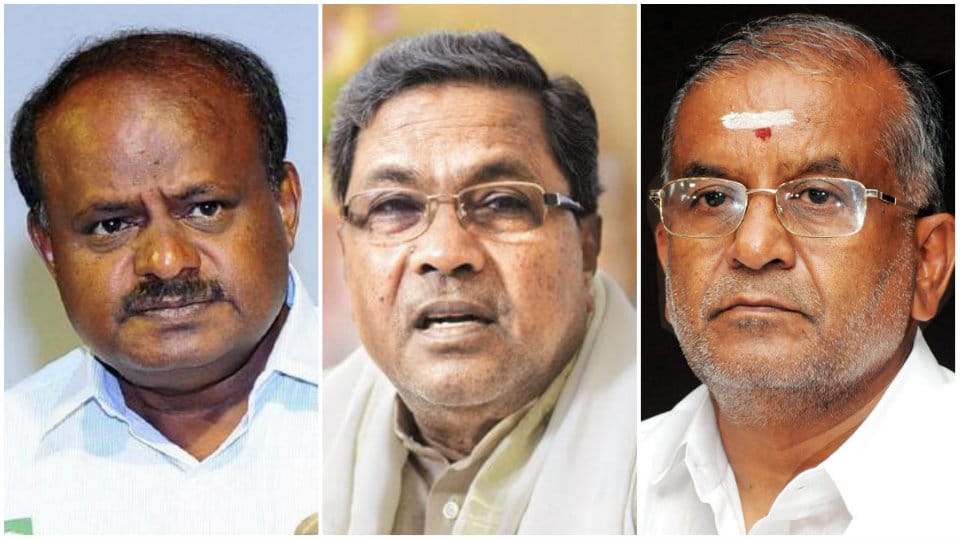 Mysuru: In keeping with the Kannada adage “Devaru Kottaroo Pujari Kodalla” (Even if God grants you, the Priest withholds), the officialdom’s lethargic and even indifferent attitude to the suffering of the people, has resulted in the inordinate delay of seven months in implementing the March 3, 2018 State Cabinet decision to delete CITB and MUDA Layouts coming under Kurubarahalli Survey No. 4 and Alanahalli Survey No. 41 from ‘B-Kharab’ classification.

The State Cabinet headed by the then Chief Minister Siddharamaiah which met at Vidhana Soudha on Mar. 3, 2018, discussed 109 issues and Kurubarahalli and Alanahalli land row was the 78th among them (subject matter No. C230/2018).      See facsimile.

The Cabinet, after a prolonged discussion, decided to leave out a total of 354.291/2 acres (including 205.091/2 acres of Siddarthanagar, 105 acres of KC Layout and 44.20 acres of JC Nagar Layout) coming under the two survey numbers, from ‘B-Kharab’ classification.

The Cabinet also decided to hand over the land to MUDA after ‘B-Kharab’ deletion. The Cabinet had directed the then Revenue Minister and the officials to bring the Cabinet’s decision to the notice of the High Court as Kurubarahalli Sy. No.4 row was already in the HC.

Although seven months have passed since the Cabinet decision, the concerned Minister nor the officials have shown any interest on implementing the Cabinet decision.  A reflection on the lack of sympathy to the four years of suffering and pain of nearly 25,000 people living in these Layouts. 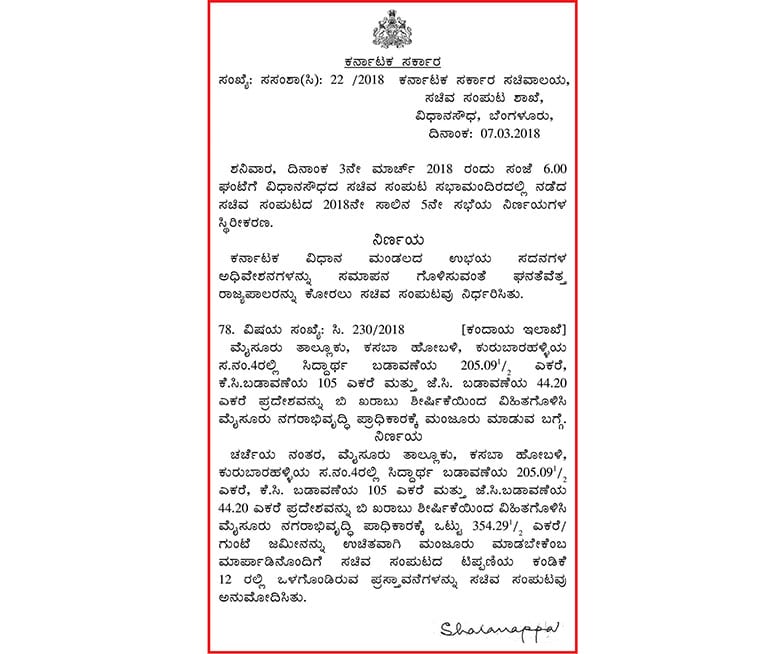 With the announcement of the poll schedule on Mar. 27, the then Revenue Minister Kagodu Thimmappa was only keen on his future political career, while the officials never bothered to follow up the matter. Even though JD(S)-Congress coalition government came to power nearly five months ago following the May 2018 elections, neither the new Revenue Minister R.V. Deshpande nor the officials of the Revenue Department took up the follow up action on the Siddharamaiah government’s Cabinet Decision in this regard.

In the meantime, the residents of Siddarthanagar, K.C. Nagar and J.C. Nagar Layouts under the two survey numbers, are eagerly awaiting the implementation of the Mar. 3, 2018 Cabinet Decision, which has not happened so far. The CM’s Janaspandana public contact programme will not be a success until he takes the officials to task for their lackadaisical attitude.

Following a direction from the Government and a Court ruling, the then Deputy Commissioner (DC) C. Shikha in May 2015 had passed an order declaring land coming under Kurubarahalli Sy. No. 4 and Alanahalli Sy. No. 41 as ‘B-Kharab’ land (Govt. land). Following the then DC’s order thousands of residents of CITB and MUDA developed Layouts of Siddarthanagar, Vidyanagar, K.C. Nagar, J.C. Nagar coming under the two survey numbers were put to lot of hardship as MUDA and MCC stopped issuing land documents such as khata transfer, building plan approval, CR etc. As such, the residents could not deal with their sites or properties as they wanted.

The aggrieved residents, who formed an association under the leadership of BJP National Council Member and former KEA Chairman B.P. Manjunath, staged demonstrations and road blockages to draw the attention of the government for ending the row. Due to consistent pressure from the residents, the then Congress Government headed by CM Siddharamaiah assured of resolving the row, following which the then State Cabinet which met on Mar. 3, 2018 decided to delete the lands developed as Layouts by CITB and MUDA coming under the two Survey Numbers from ‘B-Kharab’ classification.

Mysuru, Oct.2- District-in-Charge Minister G.T. Devegowda (GTD), speaking to Star of Mysore yesterday, promised to speak to the Revenue Minister R.V. Deshpande and also the Revenue Secretary in this regard to take steps to implement the Cabinet Decision.

He said he would ask the Revenue Secretary to immediately apprise the Advocate General about this matter pending in the High Court and inform the Court about the Cabinet Decision in this regard.

According to him, thereafter, the Revenue Secretary would be asked to issue orders as per the Cabinet Decision to the Deputy Commissioner of Mysuru District who will then pass final orders excluding the Layouts coming under the two Survey Numbers.