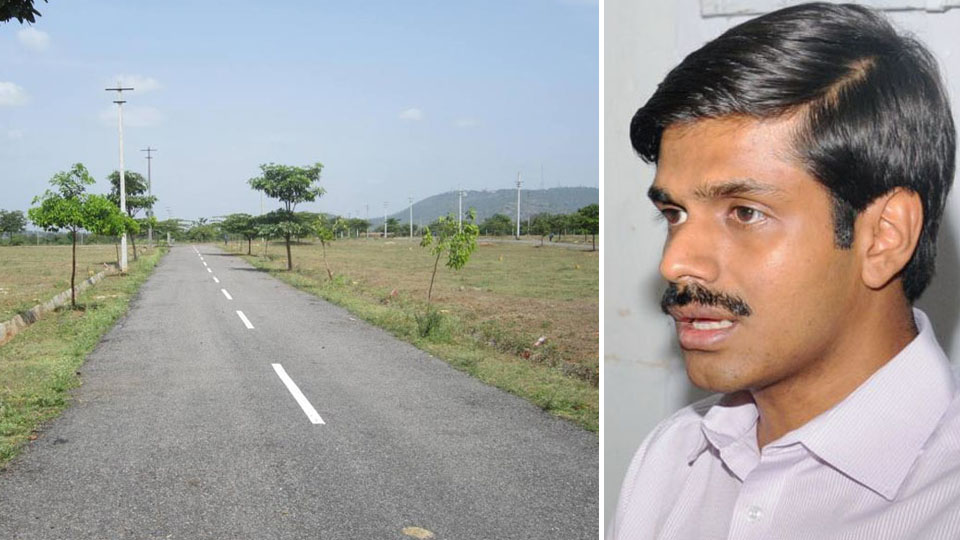 Mysuru:  The reports published in Star of Mysore dated Sept. 25, 2018 about a letter from the Chief Minister’s Office (CMO) [No. CM/52430/REP-4EM/2018 dated Sept. 17, 2018] directing the MUDA Commissioner to take further action in respect of the previous Siddharamaiah Government’s Cabinet decision to exclude Layouts namely Siddarthanagar under Kurubarahalli Survey No. 4 and Alanahalli, K.C. Nagar and J.C. Nagar under Alanahalli Survey No. 41 developed by CITB and MUDA from ‘B-Kharab’ classification has no validity to act on, according to Deputy Commissioner (DC) Abhiram G. Sankar.

This was disclosed by the DC himself last evening when Star of Mysore Editor-in-Chief K.B. Ganapathy spoke to him in this regard. Earlier, when Ganapathy spoke to District In-charge Minister G.T. Devegowda urging him to expedite the process of excluding the ‘B-Kharab’ status of those CITB and MUDA-developed Layouts mentioned above, following the letter from the CMO to the MUDA Commissioner, Minister G.T. Devegowda said that since the DC was with him, he (Ganapathy) should speak to him directly and get clarification.

Accordingly, when Ganapathy spoke to the DC, the clear picture emerged. The DC said that if the Cabinet had taken a decision in this regard, then to implement the decision, he must get the orders from the Revenue Secretary and only then he could implement the order.

Thereafter, Ganapathy requested the District Minister to speak to the Revenue Minister and also the concerned Secretary to speed up the process and give relief to thousands of people in these Layouts who have been suffering since last four years unable to get any documents from the MCC or the MUDA to deal with their properties as they wanted.

It may be mentioned that as a result of the sudden declaration of all these CITB and MUDA developed Layouts as ‘B-Kharab’ by the then DC C. Shikha, the site owners in these Layouts were unable to get Khata transferred to their names and also to either sell, mortgage or get building plans sanctioned to construct houses and buildings.

After much protests by the residents and representations to the then Chief Minister, Siddharamaiah’s Government took a Cabinet decision to exclude these Layouts from the ‘B-Kharab’ category. Because the decision was taken towards the end of Siddharamaiah’s term as the Chief Minister, the follow-up action from the Revenue Department could not be taken due to the impending May 2018 Assembly elections.

However, even after the election, the follow-up action could not be taken due to the delay in the formation of the Coalition Government. But, when Chief Minister H.D. Kumaraswamy was in Mysuru in August 2018, the residents once again went in a delegation to him and presented a memorandum when he visited Suttur Mutt here. The letter from the CMO dated Sept. 17, 2018 was in response to this representation, but to a    wrong person.

It was in this context DC Abhiram G. Sankar had given the clarification to Star of Mysore last evening as mentioned above.

Some residents have shared their surprise the way CMO responded to the residents’ memorandum saying, “If only the Chief Minister’s Deputy Secretary Arun Furtado, with all his experience in Government service, had written that letter to the Secretary of the Revenue Department instead to the MUDA Commissioner, probably, the long-suffering of these hapless residents would have come to an end by now.”

The residents hope that District Minister G.T. Devegowda would follow the case and the DC would finally implement the order and give relief     to the residents.

ONE COMMENT ON THIS POST To “Kurubarahalli Sy. No. 4 and Alanahalli Sy. No. 41 ‘B-Kharab’ Land: “Order must come from Revenue Secy.  to delete B-Kharab,” says DC”