Editor’s Note: It is not known if the said letter has reached the DC’s Office which is a mere stone’s throw away from MUDA Office or if the DC is expecting an exclusive letter addressed to him directly from the CM’s Office or from the Revenue Department. If it is so, the hapless residents of these Layouts are in for further delay.—KBG, Editor-in-Chief

Mysuru: Here is some good news for the property owners and residents of CITB and MUDA Layouts coming under Kurubarahalli Survey No. 4 and Alanahalli Survey No. 41, who have been relentlessly fighting to get the land out of ‘B-Kharab’ (Government land) classification, as the State Government is said to have come up with a solution to end the nearly five-year row.

The Chief Minister’s Office (CMO), vide its letter No. CM/52430/REP-4EM/2018 dated Sept. 17, 2018, has directed the MUDA Commissioner to take further action in respect of the previous Siddharamaiah Government’s Cabinet decision on leaving out Siddarthanagar under Kurubarahalli Sy. No. 4 and Alanahalli, K.C. Nagar, J.C. Nagar and Income Tax Layouts coming under Alanahalli Sy. No. 41, from ‘B-Kharab’ classification.

The CM’s Deputy Secretary Arun Furtado has informed about the CMO’s letter to Kurubarahalli Sy. No. 4 and Alanahalli Sy. No. 41 Residents Welfare Association President B.P. Manjunath, who is also a National Council Member of the BJP and former KEA Chairman. Referring to CMO’s letter, MUDA Commissioner P.S. Kantharaj said that as the issue is wholly connected to Revenue Department, the letter has been forwarded to the Deputy Commissioner (DC), who is  also the MUDA Chairman, for further action.

However, DC Abhiram G. Sankar has clarified that the letter is yet to reach him.

Over three years ago, based on directions of the Court and the Government, the then DC C. Shikha, in her report to the Government in May 2015, had classified the land coming under Kurubarahalli Sy. No. 4 and Alanahalli Sy. No. 41 as ‘B-Kharab’ land, following which the MUDA and the MCC had stopped issuing land records such as Khata transfer, building plan approval, CR etc., of sites and other landed properties in CITB and MUDA developed Layouts of Siddarthanagar, Vidyanagar, K.C. Nagar, J.C. Nagar, Alanahalli and Income Tax Layouts coming under the two Survey Numbers. This action of the authorities had caused a lot of hardship to the residents and property owners in these Layouts as they could not do any transactions in respect of their properties. 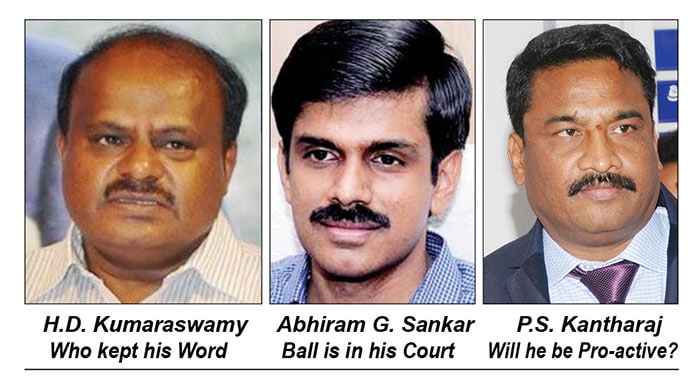 The aggrieved residents, after forming an association under the leadership of BJP leader B.P. Manjunath, had staged numerous demonstrations and stirs, even blocking several vital roads on many occasions, to register their protest against the ‘B-Kharab’ classification.

The association members met the then CM Siddharamaiah a number of times on the issue, following which Siddharamaiah had directed the authorities concerned to come up with plans on resolving the row. In March this year, before the announcement of the Assembly poll schedule, a State Cabinet meeting chaired by the then CM Siddharamaiah, decided on leaving out CITB and MUDA Layouts from ‘B-Kharab’ land classification and also to bring this Cabinet resolution to the notice of the Court.

As the poll schedule was announced days after the Cabinet resolution, the issue was kept pending.

After the elections, with the JD(S)-Congress coalition Government taking over, the Association members led by Manjunath met Chief Minister H.D. Kumaraswamy at Suttur Mutt in city last month and presented a memorandum, urging him to end the row. CM Kumaraswamy had assured the residents of quick action in this regard.

Now with the Chief Minister’s Office (CMO) writing a letter in this regard to the District Authorities, the residents are hoping that their woes would end soon.

Meanwhile, the President of Kurubarahalli Sy. No. 4 and Alanahalli Sy. No. 41 Residents Welfare Association B.P. Manjunath, speaking to Star of Mysore this morning, said that Chief Minister H.D. Kumaraswamy had responded positively when they had submitted a memorandum to him at Suttur Mutt here, on Aug.11, 2018. “I will check with MUDA and MCC whether the authorities have received the communication from the CM’s Office and learn about the status of the letter, following which we will make our next move. The DC should not find any excuse to further delay the decision in this regard,” said Manjunath.