Home » News » Kurubarahalli Sy. No.4 and Alanahalli Sy. No.41: Tahsildar stalls civil works at a fenced land at Chamundi Foothill 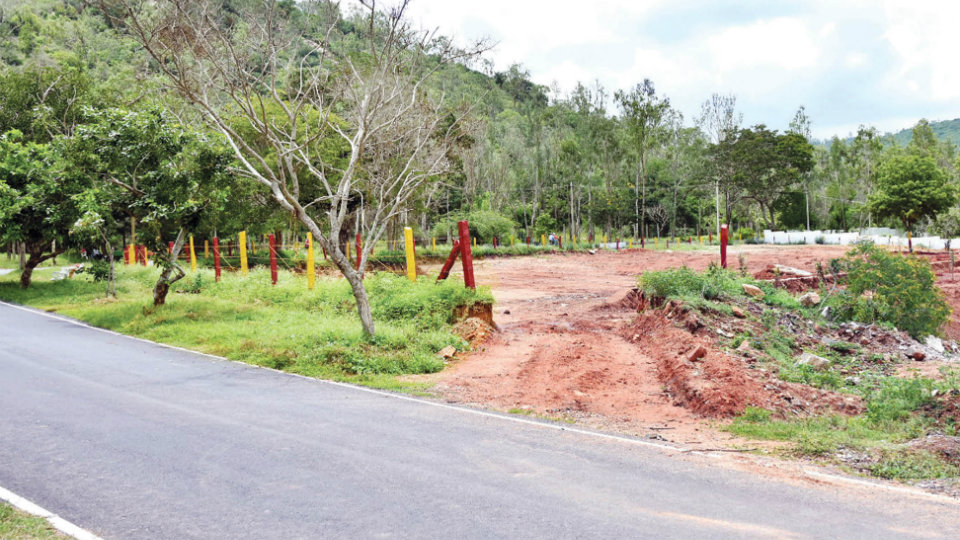 Mysuru: Even as the Government is yet to resolve the long-standing Kurubarahalli Survey No. 4 and Alanahalli Survey No. 41 row, with property and land owners in the two Survey numbers severely inconvenienced by the restraint on property transactions, it has now come to light that Revenue authorities have stalled land levelling works that were being carried out at a nearly two-acre land along the road leading from Indus Valley Ayurvedic Centre to Chamundi Hill near the main gate at the Hill footsteps.

Following public complaints that a few earth-moving machines were levelling the land which is fenced with barbed wires tied to stone poles painted in red and yellow located opposite the shrine of ‘Chamundeshwari Paada’ and Art of Living Centre, Mysuru Tahsildar T. Ramesh Babu directed Revenue Inspector Prashanth and Village Accountant Nagesh to visit the spot on July 21. The Revenue officials, who visited the spot, immediately stopped the works, it is learnt.

Village Accountant Nagesh told SOM this morning that following complaints of civil works being carried out, they rushed to the spot and stopped the works on July 21. However, one P.S. Subbarayappa, a resident of Kuvempunagar, who claimed to be the owner of the fenced land, submitted a letter to Deputy Commissioner on July 22, 2019 seeking permission to clean the land, which was rejected. He further said that the person had planted saplings at one portion of the land.