Home » Columns » Ladies, you got played… Mysuru in Trouble 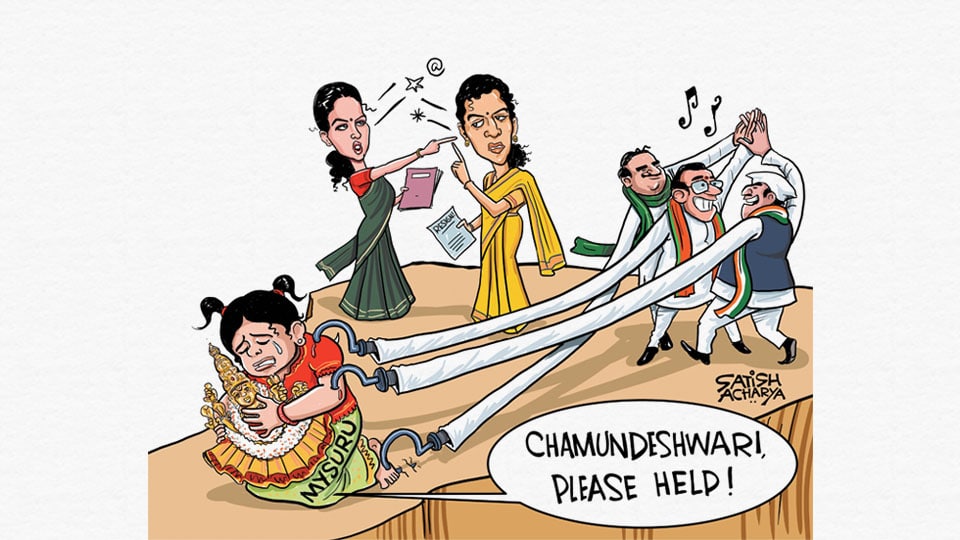 Ladies, you got played… Mysuru in Trouble

In a dramatic turn of events, MCC Commissioner Shilpa Nag on Thursday announced that she was resigning not only from her position as the MCC Commissioner but from being an IAS Officer itself at a press conference !

This new twist to the already ongoing spat between the Mysuru Deputy Commissioner (DC) Rohini Sindhuri and local politicians raises a lot of questions such as — Why did Shilpa Nag announce her resignation at a press conference instead of following protocol and submitting it to the Chief Secretary?

If her reason for resignation was harassment by DC, why didn’t she file a harassment complaint or notify her superiors about it?  And why did Shilpa Nag pen an 18-page “hand-written” resignation letter, with scratched out lines and corrections, which seemed unprofessional, very much unlike an IAS Officer?

All this, along with the fact that an official resignation letter still has not been handed over to the Chief Secretary leaves us wondering, is Shilpa Nag really serious about her resignation or was it just a momentary emotional outburst? More importantly, was it just the DC’s behaviour that drove her to resign?

Indeed, each individual has a threshold for  “belittlement” but was it really Rohini Sindhuri who pushed her to that edge of resignation or was Shilpa Nag pushed to this emotional edge by politicians who used her like a pawn to get to the DC?

Since Rohini Sindhuri came to Mysuru, local politicians wanted her gone. In spite of repeated barbs she has survived and stayed. Then the politicians seem to have come up with a strategy — use Shilpa, a Junior IAS Officer to spite Rohini Sindhuri, who is her Senior Officer.

Surely, DC Rohini Sindhuri being the Top Officer of the District Administration must have been miffed with Shilpa, her Junior, for attending meetings that she was not supposed to.  This led to misunderstanding and trust deficit between the two IAS Officers and finally the falling out.

One must congratulate our politicians for how they outsmarted two IAS Officers, the so-called best and brightest among Officers.  The politicians took two Officers, Shilpa and Rohini, who were working in perfect harmony until last month, turned them against each other and now are sitting pretty waiting to get one of them transferred. Wah! Well-played netas.

Now, while most of the politicians want Rohini out, no one seems to be able to articulate why exactly they want her gone?

What is interesting is that the same people,who did not even demand a suspension, let alone transfer of Chamarajanagar DC or any other official after  24 people died in Chamarajanagar, now want Mysuru DC transferred, for what? They don’t say!

Why are our leaders not telling us why they want Mysuru DC transferred in the middle of Covid with a third wave expected? Is it corruption? Ah! The swimming pool case.  Well, there is an enquiry that has begun it will be over in a week, if found guilty by all means get her out, until then wait?

Is it dereliction of duty then? If so, give specifics. If found guilty, then have her transferred. Until then let her work.

Unfortunately, even MCC Commissioner Shilpa’s accusations against the DC were more like an emotional outburst rather than specific in nature.

Meanwhile, we must also take note of the fact that while Shilpa Nag, undoubtedly an empathetic officer, says she is proud of Mysureans, she has deserted us in our hour of need. At a time when a third wave is expected which may affect our children for which preparations are being made she has quit!

On the other hand, Rohini Sindhuri who has been repeatedly and publicly mocked as “Maharani” and a “model”, accused of destroying heritage building, shouted at in meetings, had her competence questioned in press meets and letters written against her to the Chief Minister, she has not run away.

She has not called a press meet to cry foul against politicians, nor written letters to CM complaining of political interference and nor has she resigned. She is here fighting the good fight to make Covid-Muktha Mysuru by July 1.

It makes one wonder how Shilpa Nag would react if she had experienced the kind of attacks that Rohini Sindhuri has?

There is no doubt that Shilpa Nag is an approachable Officer and Rohini is not, after speaking to people who have worked with both Officers. But each Officer has their own style of functioning.

Indeed, an IAS Officer who goes about their duty with a sense of empathy is more effective in regular situations. But we do not have a regular crisis on our hands, what we have now is a  pandemic and in these Covid times we need a fighter not a quitter?

So we hope Shilpa Nag and Rohini Sindhuri work out their differences and realise they are being played by politicians and get back to work. After all, the third wave is going to affect our children and what better officers to have than two women, one empathetic and another result-oriented.

We hope Shilpa Nag also realises that the emotional distress she allegedly experienced because of Rohini’s behaviour will be nothing compared to the pressure she will face with request for favours from the same politicians and her own MCC staff who are now praising her if she lets them take credit for saving her and keeping her here.

For now, what has happened in Mysuru will have long-term effect on our city. Even if a new DC comes we doubt he or she will have the courage to take on these local politicians?  And that is what they want; they want the next DC to fear them. Why…?

Because, Mysuru is set for a post-Covid real estate boom. The completion of 10-lane Mysuru-Bengaluru Expressway, the Double-tracking, consistently functioning Airport, 5 new large industries and discovery that Mysuru is a good city to live by IT professionals, who moved to Mysuru during the pandemic, indicate that there is going to be a real estate boom.

And the land-sharks are already circling all along the Ring Road and beyond. So we wonder will the future DC, the head of all revenue matters in the district — from survey to conversion to khata — have the guts to take on these sharks? Let’s pray they do.

6 COMMENTS ON THIS POST To “Ladies, you got played… Mysuru in Trouble”