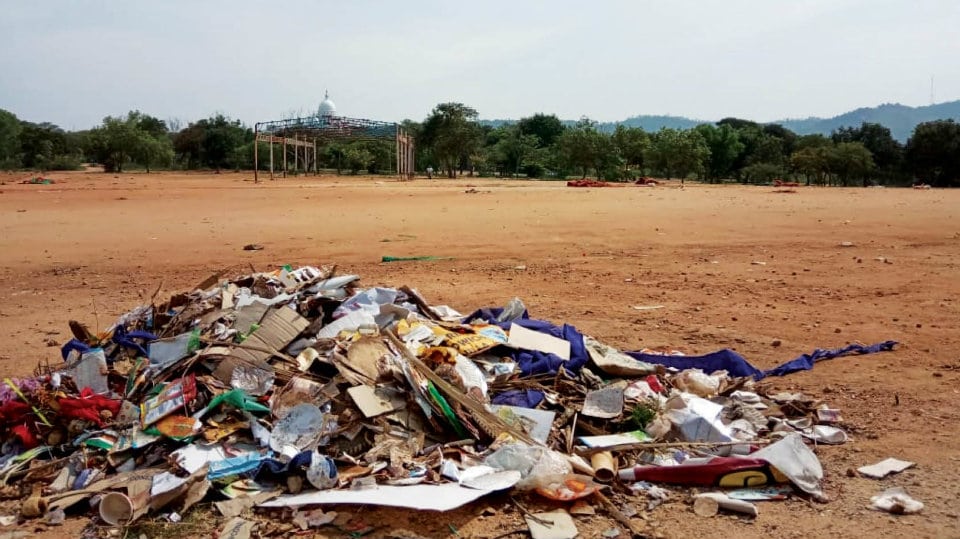 Mysuru:  The MUDA grounds near Lalitha Mahal Hotel, which was one of the Dasara Aahara Mela (Food Fair) venue that attracted hundreds of visitors by serving mouth-watering dishes, has now turned out filthy and is emanating foul smell as the leftover food items, disposable plastic food covers and other waste materials lying in heaps are left uncleared even after the conclusion of the fair a few days ago.

The Dasara Aahara Mela Sub- Committee, Food and Civil Supplies Department had organised the Mela at two locations in city from Oct.10 to 19 during this year Dasara celebrations. It had successfully conducted the mela at Scouts and Guides Grounds near DCs office in city till Oct 18 and at the MUDA  ground near Lalitha Mahal Hotel on T. Narasipur Road.

A huge quantity of disposable plastic plates, cups, spoons, food package covers and leftover food is still piled up in many parts of the grounds without being cleared by the authorities concerned. Plastic containers are strewn all over the venue.

Though the organisers had removed the temporary toilets it had installed very close to Indira Canteen near the grounds for the visitors, the septic pit it had dug still remained uncovered leading to foul smell emanating from it  and there is a fear of infections getting spread around the venue.

The organisers had cleaned the Scouts and Guides Grounds after the Dasara Food Festivities but they had not shown the same interest to clean the MUDA Grounds, which has invited public wrath. 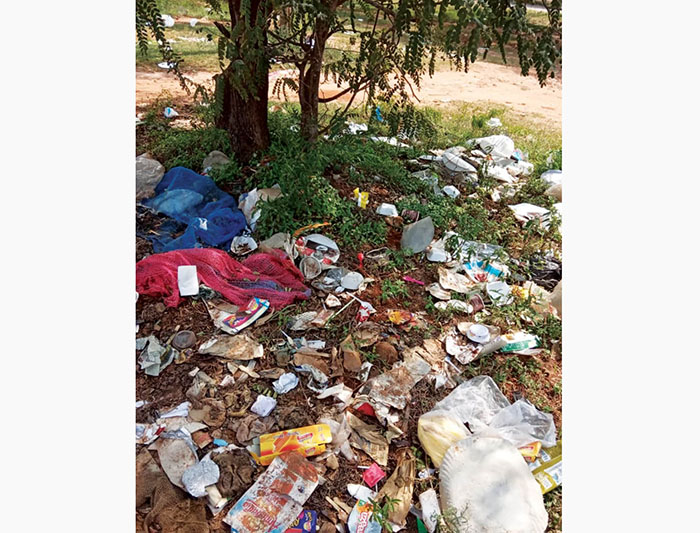 As the grounds continues to stink because of the garbage pile up and recent rains, passersby and other road users are forced to cover their nose which has become a common sight now.

The business of footpath street food vendors who have put their stall on either sides of T. Narasipur Road has been affected by the foul smell emanating from the unclean Aahara Mela venue.

The morning walkers who used to frequent the grounds for fresh air are also not visiting the grounds because of lack of cleanliness. Youth, children of surrounding areas have also stopped playing cricket and other sports because of the filth.

Speaking to Star of Mysore, Joint Director of the Food and Civil Supplies Department P. Shivanna said that the Department had given the contract to set up the stalls besides to maintain cleanliness to a Contractor at Dasara Aahara Mela venue. The Contractor will suffer loss in case iron pillars it had erected are stolen.

As per the agreement, the Contractor must take steps to fill the septic pit of the temporary toilets. Moreover, the MCC should clean the ground after the completion of the Dasara festivities.

“I will visit the spot to take stock the situation besides taking  suitable measures to get the ground cleaned”, Shivanna said.