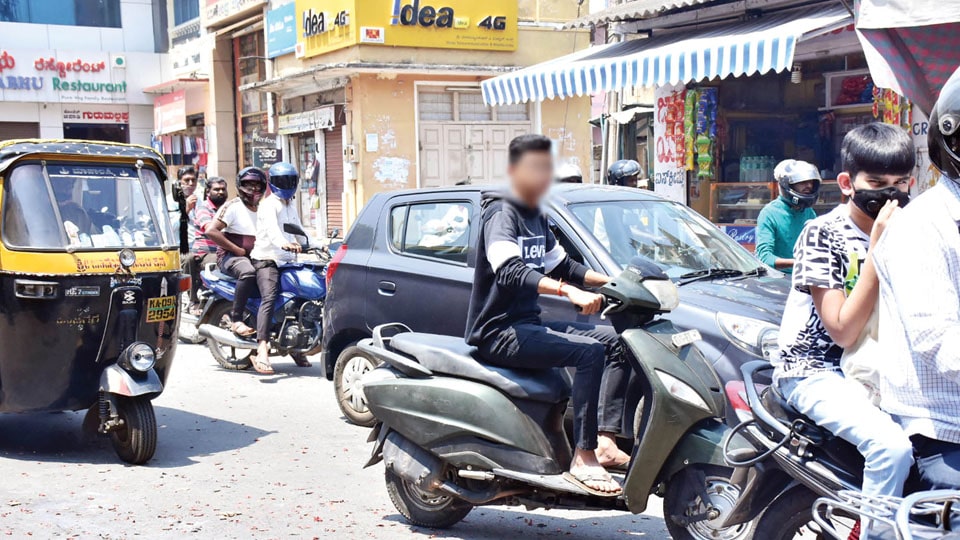 Law catches up with underage drivers

Mysore/Mysuru: Law is finally catching up with minors who drive cars or ride two-wheelers. 18 is the age to secure a Driving Licence and the City Police have launched a crackdown on children getting on to roads with their vehicles.

After Deputy Commissioner Rohini Sindhuri directed all government and private colleges to refuse parking space for vehicles driven by minor students, Deputy Commissioner of Police (Crime & Traffic) M.S. Geetha Prasanna had instructed all petrol bunk owners to inform the nearby Police Station immediately in case any minor brings a two-wheeler to fill petrol. These directives have had their effect and 15 minors and their parents have been booked based on the details furnished by petrol bunks and in the random and voluntary checks conducted on various roads, the Police have booked 66 cases against minors and their parents and have collected a fine of Rs. 66,000.

Written undertaking from parents: After summoning parents of the minors to the Police Stations, an undertaking is taken from them in writing that they would not allow minors to drive henceforth. After collecting the fine and the written undertaking, minors and their parents are let off with a warning. The actual owners are identified through the vehicle RC book.

“We will continue the drives and is a part of our daily routine. We will keep a watch on college campuses, shopping malls and bus stands where minors generally bring vehicles to drop their friends. Young lives are precious and we need to save them. Moreover, underage boys and girls can cause accidents, which sometimes could seriously injure themselves or others,” DCP Geetha Prasanna told  Star of Mysore.

Hundreds of children are seen throughout the city zooming on their two-wheelers and it is a common sight to see three or even four children driving on a single vehicle. This is perhaps the first time that the City Police have focussed on reigning in parents who give two hoots to the traffic laws. “Minors must not take out vehicles onto the road. This is the message we want to send out by such drives,” she added.

Adolescent children — boys more often — indulge in bike racing and rash driving to impress peers as they feel a sense of freedom by violating the law. This also prompts an underage driver to not wear helmets and seat belts.

Many parents take pride in underage driving too as they think that their children are independent. But the Police say that parents need to realise that underage driving is taking a toll on human lives. By allowing their underage children to drive vehicles despite the law not permitting, parents are not only subjecting them to the danger of mishaps but also indirectly teaching them how rules should be flouted.

Earlier, a child caught driving was fined Rs. 500 and the parents had to pay Rs. 1,000. However, juveniles booked for an offence under the Motor Vehicles (Amendment) Act, 2019 seeks to deem parents or guardians guilty in such cases with a fine of Rs. 25,000 with three years in jail.