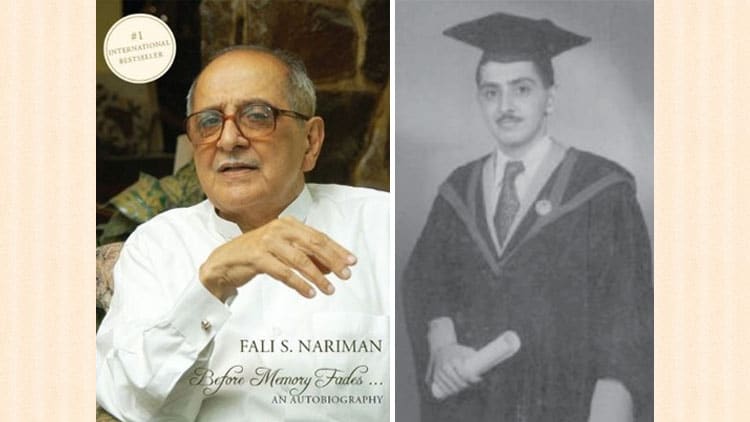 Fali Nariman mentions of yet another important Turning Point in his professional career in Bombay, before moving to Delhi. He was briefed by his “very good friend” Attorney Dharmsingh Popat, a senior partner of the famous Law Chamber Mulla & Mulla, Solicitors, in a famous case. It was a cause celebre in the Supreme Court. It was the very famous case known as Golakanth case (1967) — Golaknath Vs State of Punjab. Nariman had the privilege of appearing as a Junior Counsel in 1967 in this case assisting Senior Counsels A.K. Sen and N.A. Palkhivala.

Six years later in 1973, the same case was discussed in the Supreme Court in another context. By then, Nariman had become the Additional Solicitor General (ASG) of India. Certainly, being briefed (engaged) in the Golaknath case, thus, was no doubt an important Turning Point enabling him to know personally the giants in the Supreme Court and build his career.

The book discusses many important issues relating to our Constitution — fundamental rights, significance of preserving the ‘basic structure’ of our Constitution, the danger inherent in a majoritarian Government (having more than three-fourths of Parliament’s total strength), appointment of Judges etc.

Nariman makes a very significant observation in the matter of the ‘basic structure theory.’

What is political power?

According to Nariman, “assumption of power by which one organ of Government (here in this context judiciary) is enabled to control another (here Parliament) has been characterised as political power.” Let it be.

Five years after this theory was first propounded, the Parliament brought in the Constitution Forty-fourth Amendment Act-1978 providing that the fundamental right of Life and Liberty guaranteed by Article 21 of the Constitution could never be suspended by enacting a law or by a Constitutional Amendment even during an Emergency, as happened in 1975 Emergency. “The basic structure theory has now been woven into our Constitutional fabric,” says Nariman. A reminder to all of us the imperative of safeguarding our right to Life and Liberty.

In 1966, when he was 38 years old, he was offered the post of a Judgeship at the Bombay High Court which he refused more for the poor remuneration of a Judge at that time. Apparently, he knew which side of the bread was buttered — private practice. But in 1972 he was happy to accept the appointment as the Additional Solicitor General of India. Luck and another Turning Point, as he would admit. However, as a man of high principles, he resigned as ASG after the Emergency was declared in 1975.

As I was traversing his days and years in Bombay, I found there was no mention of his parents. It was later, as in passing, a mention was made of his parents who had left India and gone back to Rangoon in 1947.  Could it be at the instance of his mother who was from Rangoon, Burma? Men, generally, sway in family matters in the direction of their wives!!

As a result, Nariman lived, during his days at the Law College and early years at the Bar, with his father’s cousin who was working as a Registrar in the High Court of Bombay till he got married.

Be that as it may, this might be the reason why he was alluding in the early pages of the book to Turning Points, Luck, Providence and God. He was naturally missing his father and had no ‘Godfather’ either as he had mentioned.

Rest of the book, running to 450 pages with useful index, is all about his name, fame and position, becoming even Rajya Sabha (RS) Member etc. But, more importantly the inner working of superior Courts in our country and the appointments of Judges…

Towards the end of the book, he reflects on old age. He was 80 plus, ripe old age, he admits, and tells the readers of the book what sustains him. Two things. First: The possibility and the thrill of winning a difficult case. Second: The affection of all his colleagues                    at the Bar.

“I must end with a note of apprehension.” He goes on:

“My greatest regret in a long, happy, interesting life is the intolerance that has crept into our society. For centuries, Hinduism had been the most tolerant of all religions. But over the past few years (the book was written in 2010), I have been a reluctant spectator of a new phenomenon. The Hindu tradition of tolerance is under immense strain — the strain of religious tension fanned by fanaticism… Is Hinduism changing its face?…”

Having said this, speaking for himself as belonging to Parsi minority religion of non-Indian origin, he declares rather happily that “I have never felt that I lived in this country at the sufferance of the (Hindu) majority. …I have lived and flourished in a Secular India. …I would also like to die in a Secular India.”

These are Nariman’s last words in the book titled “Fali S. Nariman, Before Memory Fades…” He need not have any apprehension. He would surely die in a Secular India. I say this, like Osho Rajneesh, on my own authority!

As I closed the book, I was left wondering why, like the Parsis (the followers of a religion of non-Indian origin) other minorities professing a religion of non-Indian origin could not live in a Secular India, as perceived by Nariman in his personal case, without the alleged or supposed sufferance of the majority? Is there a need to redefine or differently interpret the word Secular in the context of India? I wish Fali Nariman had explained the causes for “the intolerance that has crept into our society.” He could have explained why “The Hindu tradition of tolerance is under immense strain.” Like everybody else he attributes the reason to “fanaticism” and goes into silence.

Social leaders of all India stature like Nariman should speak-out so that both the majority and the minority will introspect and practice tolerance which is good for all the people of this Secular India. Sadly, the wise always fall silent !

Tailpiece: Nariman writes about the Cauvery Water Disputes Tribunal set up in 1990. Nariman was the lead Counsel for Karnataka along with other three. A final decision was handed down by the reconstituted Tribunal in 2007, after 17 years. Karnataka challenged it in the Supreme Court… and a final ‘resolution’ of the dispute “is yet not in sight!” concludes Nariman when he wrote the book in 2010.

Let me add here that a part of the anger in Karnataka over the Supreme Court direction on release of Cauvery water to Tamil Nadu was directed against the State’s Legal Counsel Fali S. Nariman. When I visited Delhi during S. Bangarappa’s Chief Ministership in Karnataka, I happened to attend the proceedings of the Tribunal. There I saw Senior Tamil Nadu Advocate, I think, Parasaran while Fali S. Nariman was conspicuous by his absence. At the Tribunal and later when I interacted with our Karnataka lawyers and the then Law Secretary and Advocate General I got the sense that none of them was happy with their lead Counsel Fali S. Nariman.