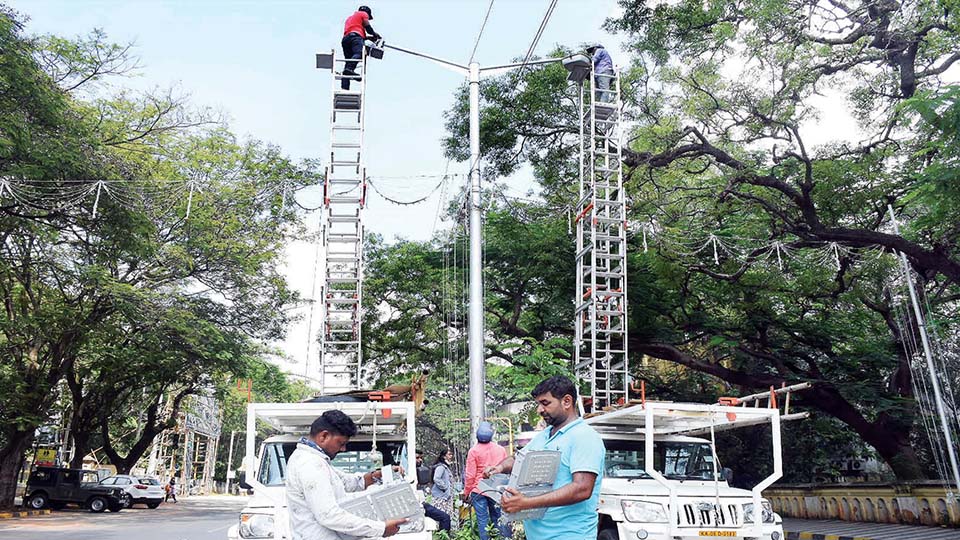 Mysuru:  The 2015-16 proposal of the State Government to replace conventional streetlights with energy-efficient Light Emitting Diode (LED) lights in Mysuru has finally taken off with the Mysuru City Corporation (MCC) handing over the seven-year Public Private Partnership (PPP) model project to New-Delhi based e-Smart firm.

The agreement with e-Smart and the MCC has been signed and work of replacing 60,000 bulbs with LED has already begun from Jayachamaraja Wadiyar Circle (Hardinge Circle), Chamaraja Circle, K.R. Circle, Sayyaji Rao Road, D. Devaraj Urs Road and JLB Road. The bulbs are being replaced and the new LED bulbs are being tested every night. The installation of all the 60,000 bulbs will have to be completed within three months.

With an intention to save on energy costs, the Government, during its 2015-16 Budget, had proposed to replace conventional bulbs including tube lights, high-pressure sodium, mercury vapour and metal halide lights (halogen lamps) with LED bulbs in City Corporations outside Bruhat Bengaluru Mahanagara Palike (BBMP) and had selected Mysuru for the pilot project.

As per the agreement between e-Smart and the MCC, all the existing 60,000 bulbs of streetlights, parks and burial grounds will be replaced. However, the dangerously dark Ring Road has been left off though promises were made by the Ministers and elected representatives to include it in the LED electrification project.

After the MCC handed over the project to e-Smart, Chief Minister Basavaraj Bommai launched the installation of LED bulbs by pressing a remote control button for the lights along Albert Victor Road near Kote Anjaneyaswamy Temple at the Palace North Gate on Oct. 6 in the presence of District Minister S.T. Somashekar, Urban Development Minister Byrathi Basavaraj and other dignitaries.

Savings of Rs. 27 crore per year

Speaking to SOM, MCC Commissioner Lakshmikantha Reddy said that the MCC will not spend even a single rupee on the project. “The LED streetlight project will save a whopping Rs. 27 crore per year to the MCC and the Civic Body can divert the funds for other public utility projects. Though LED streetlights cost more up front, reduced costs for energy and maintenance over the working life of LED streetlights mean they can pay for themselves in the longer run,” he said.

As per the agreement, e-Smart will save 53 percent of the Rs. 27 crore after fully replacing the bulbs. For example, if e-Smart saves Rs. 53 of every Rs. 100 spent as electricity bills, it can keep the money (53 percent) and pay the remaining money to the Chamundeshwari Electricity Supply Corporation (CESC). If higher savings are achieved beyond 53 percent, the excess savings will be divided among themselves by MCC and e-Smart, said MCC Superintending Engineer (SE) Mahesh.

The project is being implemented with a Centralised Control and Monitoring System (CCMS) with smart meters and Internet of Things (IOT) controllers. This enables integration of all LED lamps and they can be operated remotely through wireless communication.

The CCMS enables engineers to operate, control, monitor and rectify the integrated LEDs remotely via wireless communication. The system works on a node-and-hub model where each LED lamp is geo-tagged to a controller and a smart meter. The data collected is transmitted to the centralised hub or a control room at Vani Vilas Water Works (VVWW) premises for efficient control and monitoring.

2 COMMENTS ON THIS POST To “LED streetlight project sees light”