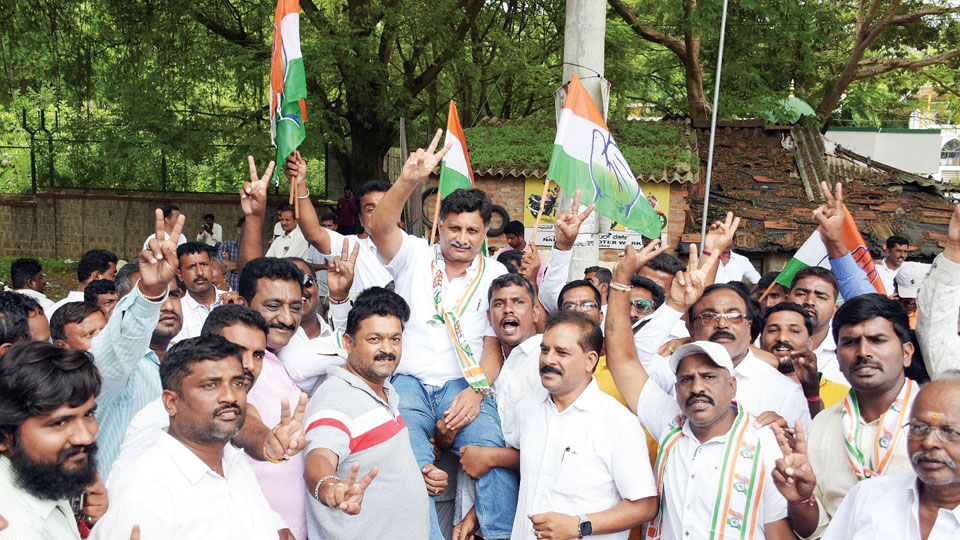 Defeats nearest rival M.V. Ravishankar of BJP by over 12,000 votes after a marathon counting of over 29 hours

Mysore/Mysuru: After perhaps the longest vote counting process in the electoral history of Mysuru that spanned over 29 hours, Congress candidate Madhu G. Madegowda emerged as the clear winner of the  Legislative Council Polls from South Graduates Constituency this afternoon.

Mysuru Regional Commissioner Dr. G.C. Prakash, who is also the Returning Officer, made the official announcement declaring  Madhu Madegowda as the victorious candidate  at about 1.30 pm.

The non-stop counting process which began at 8 am yesterday (June 15) at Maharani’s Women’s Commerce and Management College on Valmiki Road, spilled over to today also as none of the 19 candidates in the fray managed to secure the 50 percent quota of the first preferential votes to be declared the winner.

After all the invalid votes were taken out of counting, the poll officials had set 46,803 first preferential votes as the quota for any candidate to be declared the winner. Though  Madhu Madegowda, who had bagged the highest number of votes among all the 19  candidates, fell short by 808 votes of reaching the quota (46,083), the election officials decided to go for the count of second and other preferential votes until any of the candidate reached the quota, which process took such a long time.

Finally, Madhu Madegowda of the Congress, who maintained a steady lead since the beginning, won the election by reaching the set quota after the transfer of preferential votes.

He emerged victorious defeating his nearest rival M.V. Ravishankar of the BJP by a huge margin of about 12,000 votes.

This is the second straight loss for Ravishankar who managed to secure 33,878 votes, falling behind his Congress rival all throughout the counting. Ravishankar had lost against K.T. Srikantegowda of the JD(S) by a slender margin in the 2016 polls.

Returning Officer Dr. G.C. Prakash handed over the certificate of his election to Congress candidate Madhu Madegowda later in the afternoon, it is learnt.

JD(S) candidate H.K. Ramu (over 17,000 votes) came a distant third, with the party failing  to retain the seat.

As far as the rest of the candidates are concerned, independent candidate Prasanna N.Gowda, who was backed by KRRS, DSS,AAP and a host of other organisations came fourth securing over 6,600 votes, while N.S. Vinay, who had contested as an independent after he failed to get the BJP ticket, came fifth (over 3,400 votes) and BSP backed candidate Dr. B.H. Channakeshavamurthy came sixth bagging over 2,600 votes. All other candidates including former MLA Vatal Nagaraj failed to  reach even the four-figure mark.

With this win, Madhu Madegowda, who is the son of former Minister and former Mandya MP late G. Madegowda, has won the seat for the Congress party for the first time, thus breaking  the  dominance that the BJP and the JD(S) had till now on this  politically significant Graduates  Constituency which covers the districts of Mysuru, Mandya, Hassan and Chamarajanagar.

Madhu Madegowda is an Engineering Graduate from SJCE in Mysuru, passing out in the year 1985, it is learnt.