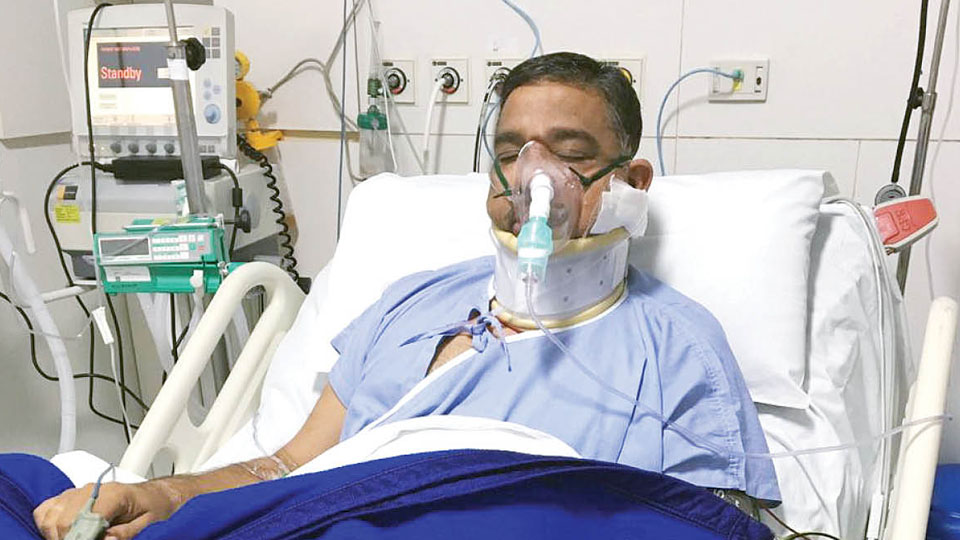 Mysuru: Doctors at Columbia Asia Hospital performed a minor surgery on MLA Tanveer Sait’s ear and removed a part of the earlobe which was stitched as it had caught infection.

Briefing the media at the hospital on Sait’s health condition, Hospital Chief Dr. Upendra Shenoy said that the part of the earlobe, which was severed during the murderous attack on Sait on Sunday evening and stitched at the hospital, was removed and the earlobe part was handed over to his family members as per their request.

He has been shifted to ICU and would be shifted to the ward if his health stabilises besides stating that plastic surgery on his ear would be performed later.

He further said that Sait’s health condition is improving, his kidneys functioning normally and blood pressure was normal. He is under soft diet at present, the doctor added.

Continuing, Dr. Shenoy said that Sait has to stay in the Hospital for 4-5 days and he has to take rest for a few weeks once he is discharged from the hospital. Changes are seen in his health since last 24 hours.

Consultant ENT, Head and Neck Surgeon Dr. H.A. Dattathri said that Sait’s voice box (larynx) has become weak today and added that it would recover on its own day-by-day after the swelling on his neck subsides.

He further said that there are many nerves connecting his lips, eyes, eyelids and the nerve on his neck connecting his lower lip has been permanently damaged besides stating that this would not hamper his speech.

Former Chief Minister H.D. Kumaraswamy visited the Hospital this morning and enquired the health of Sait.

Speaking to the media, Kumaraswamy said that there is no danger to the life of Sait as his health condition was improving day-by-day. He said that the doctors said that they would keep Sait under observation for a day and then shift him to the ward.

Stating that it was a rebirth for Sait, Kumaraswamy said that as the investigation into the incident was going on, one cannot jump into conclusion on who committed the crime.

The former CM said that Sait was well-known among all political circles and added that the Police should take the issue seriously and bring those behind the heinous act to book soon.

Former Minister U.T. Khader, MLA S.A. Ramdas and others also visited the Hospital and enquired the health of Sait.