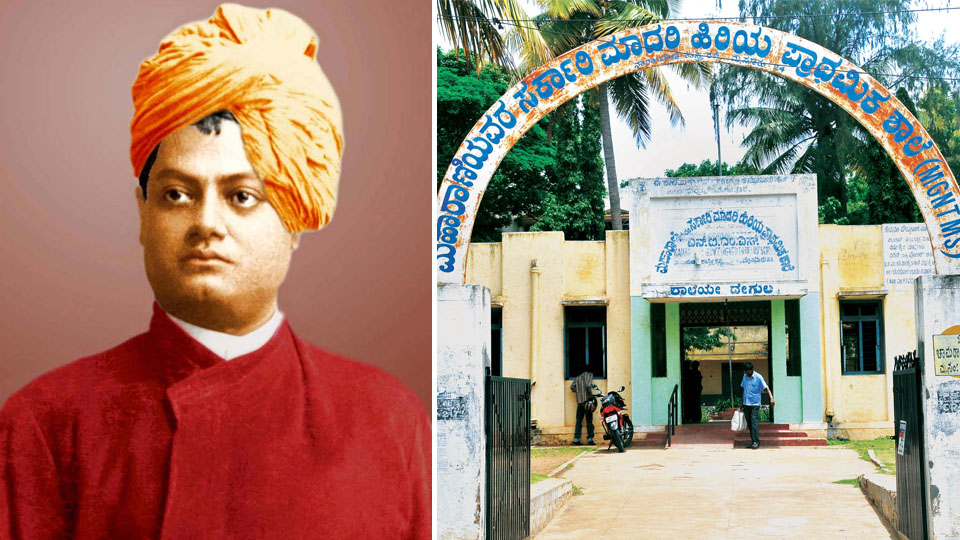 Mysuru: Even as Historian Prof. P.V. Nanjaraj Urs claimed recently that there was no proof to say that Swami Vivekananda stayed at Niranjana Mutt during his visit to the city in 1892, two former officials of the city have come up with evidence to suggest that  the monk stayed here and have also thrown light on some other facts concerning the NTM School on Narayana Shastry Road in the city.

N.S. Chakravarthi, retired Additional Secretary, Government of India and J.K. Basappa, retired Deputy Tahsildar and a Practising Advocate, in a joint letter, have stated that Niranjana Mutt located on Narayana Shastry Road was under the control of the State Education Department about seven years ago. The Mutt then housed three structures — the heritage Niranjana Mutt building, New Type Middle School (NTMS) and a building belonging to the Block Resource Centre (BRC), with a small Shiva temple close-by.

Basically, all the said three structures had come up in the space belonging to an Orphanage (Anathalaya) and there are official records to prove this and the Orphanage was managed by M. Venkatakrishnaiah, who was popularly known as Thathaiah.

There is no doubt about the fact that Swami Vivekananda stayed at this Mutt, which was part of the Orphanage, for three weeks when he visited Mysuru in 1892. During his stay, the Swami delivered spiritual discourse every day at Sadvidya Pathashala, located very close to the Mutt. His discourses had attracted the citizens of Mysuru  in large numbers and also made an everlasting impact on them.

Besides, the then Maharaja of Mysore Chamaraja Wadiyar  and the then Dewan of Mysore Seshadri Iyer too were closely associated with the young spiritual leader.  It is a well-known fact that the Swami also stayed at Seshadri Bhavan located beside the Niranjana Mutt.

With days passing by, the then Government in 1915, shifted the Orphanage to a place near Subbarayanakere Grounds and took possession of the land which housed the Orphanage and there is enough evidence to suggest this.

Thereafter in 1953, the then State Government’s Education Department built the NTM School in the above said land for the benefit of girl students. But later on as the number of girl students dipped sharply, the School was converted into a co-education School with admissions open for both boys and girls and by then the Maharani High School for girl children had already come up adjacent to it. But it is wrong to say that the Maharani, after merging the Maharani High School, had set up the NTM School herself. As such, it can be said that the Maharani School had nothing to do with NTM School.

Due to poor admissions at NTM School, the Karnataka Government merged the School with the nearby Devaraja School and thereafter sanctioned the total land of the School and Niranjana Mutt to Sri Ramakrishna Ashram in 2013 for the construction of the proposed Viveka Memorial (Swami Vivekananda Cultural Youth Centre) at the site.

It is important to note here that this Memorial is meant to be an inspirational centre for thousands of youths and personality development. The project will come up with help from the Central and State Governments. When executed, the project will be of huge benefit to thousands of students and this centre will no doubt be beneficial to Kannadigas. When this is the fact, one cannot understand why anyone has to oppose the Viveka Memorial project.

Another important fact that needs to be mentioned here is that, the then UPA Government headed by Prime Minister Dr. Manmohan Singh in 2012, had passed a resolution to set up Memorials in the name of Swami Vivekananda at various places where the Swami stayed across the country.

Following the resolution, service-centric Viveka Memorials have come up at various places in Gujarat, West Bengal, Tamil Nadu etc. Likewise, the then Karnataka Government in 2013, passed a Government Order dated 9.1.2013, giving permission for the Ramakrishna Ashram to set up the Viveka Memorial at the NTM School site. Accordingly, the land was handed over to Ramakrishna Ashram.

It is to be understood here that Sri Ramakrishna Ashram is not for making any profit from the Memorial but in the interests of lakhs of citizens and thousands of students. The Memorial, which is to be built on the lines of a service centre, will help students in their personality development and learning.

Now, everyone, after taking  all the above mentioned factors into account, should whole-heartedly extend their co-operation for construction of Viveka Memorial, which no doubt will be one more feather in the city’s cap, with the city already having earned the name as the cultural capital of the State.