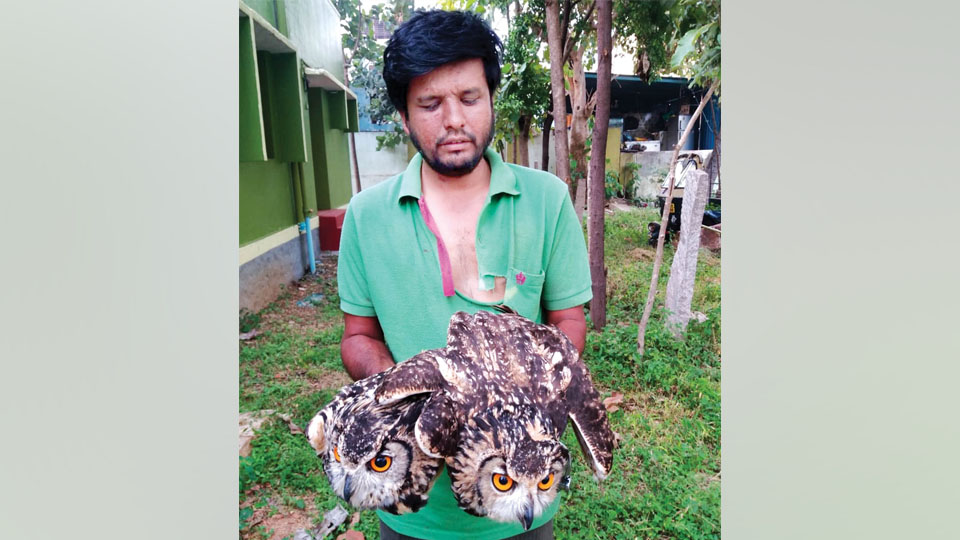 Mysuru: The Forest Mobile Squad personnel have arrested one person on charges of illegally catching Indian owls and trying to sell them and have rescued two owls. The arrested is Dhanaviraj of Hakki Pikki tribe at Shikaripura in Nagamangala taluk.

Following a tip off, DCF Poovaiah, in the guise of a customer, approached Dhanaviraj and laid a trap. The accused fell into the trap easily. Poovaiah said that there is an active gang which catch the owls illegally and sell the same to gullible customers at a very high price due to myths surrounding the owl.

Owls in demand in election season

In a latest trend, poachers have been using social media to sell the owls. Birds’ photographs and prices are being circulated through WhatsApp.  The Indian eagle owl is called ‘kombina goobe’ in Kannada for its horn-like feature and there is a blind belief that people can be brought under a spell, especially because the birds have large, unblinking eyes.

Since owls are rarely seen during the day, the most prevalent image of the owls is that which associate it with the dark. Unfortunately, this has given rise to indiscriminate killing to ward off the ‘evil eye’ and also its use in various rituals.