Home » Feature Articles » Lingambudhi Kere: The lake for all seasons needs a makeover 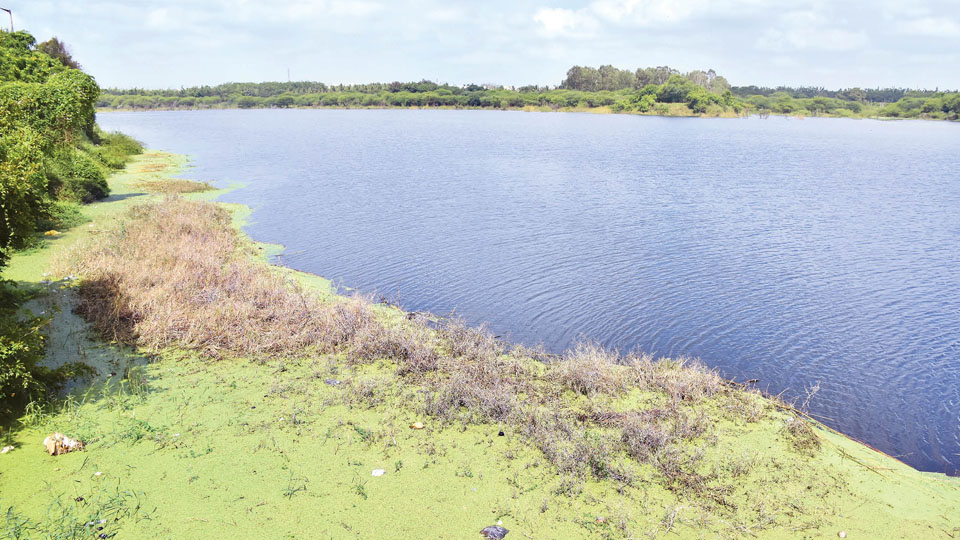 Lingambudhi Kere: The lake for all seasons needs a makeover

The vast ‘Lingambudhi Kere’ (lake), which was considered as the only all-season lake with pristine water in the city decades ago, is now in a poor state as the water body is polluted by drainage and sewerage water. The pollution of the lake is threatening the fragile ecosystem of the surrounding, with several migratory birds dying, unable to cope with the lake’s all too polluted water.

Lingambudhi Lake was built by the erstwhile Mysuru ruler Mummadi Krishnaraja Wadiyar in 1828 in memory of Maharani Krishna Vilasa Lingajammanni and has a long history of its own.

The lake, which held pristine water decades ago, today presents entirely different picture, due to the negligence of the authorities concerned. More than fifteen Northern shoveler migratory birds were found dead in the polluted lake in the past couple of days, which has caused concern in bird lovers. It is found that the sewage water entering into the lake is the main pollutant and authorities seems to have turned a blind eye to this problem.

The Lingambudhi Lake is fed by two Rajakaluves, meant for the gravitational flow of storm water. While one Rajakaluve is now largely encroached upon by land sharks, thus blocking the flow of rainwater to the lake, drainage water flows in the other, which has caused pollution of the water body. Despite the encroachment, the lake has been getting rain water from Srirampura side through the Rajakaluve, while polluted water is entering the lake from the Dattagalli side Rajakaluve. The problem is more compounded as the flaws in the underground drainage system at Janatanagar have not yet been fully rectified despite the execution of works.

The Rajakaluves of the lake has become a dumping spot of wastes generated in Kalyana Mantaps located at Dattagalli, Ramakrishnanagar, Ring Road and surrounding areas. Besides, the wastes generated from meat shops in these localities too are being dumped in the Rajakaluves, which  is seen as the major contributor for pollution of this vast and beautiful lake. With the lake getting more and more polluted with each passing day, the District Administration must wake up and take measures to stop the flow of underground drainage water to the lake. Also, the authorities must install grills for preventing plastic materials flowing along with water in Rajakaluves, entering into the lake, on the lines of the grills erected at Karanji Lake.

The Lingambudhi Lake is home to several species of migratory birds, which come here from far off countries for breeding. An organisation named Mann, which carried out a survey of the lake in 1980, had come up with a report suggesting that the lake be developed into a bio-diversity park of National or International level. In this backdrop, the then Deputy Commissioner of Mysuru in 1990, T.M. Vijayabhaskar, who is currently the State Chief Secretary, had taken measures to completely block entry of drainage water from surrounding localities to the lake and had handed over the custody of the lake to the Forest Department. Now any proposal on conversion of the lake to a bird sanctuary may not only get Government sanction, but funds as well.

Although the lake is located on the outskirts of the city, it has still maintained it’s natural forest environment, with scores of trees and bushes around. The lake also has many Bamboo groves which provides a perfect setting for an international level bio-diversity park. As such, it is the responsibility of the citizens to join hands with the District Administration to save this beautiful lake for generations to come.

The authorities have paved the walkway of the lake with inter-locking tiles, spending lakhs of rupees. But poor maintenance of the walkway has led to bushes occupying the walk space. As the walkway is almost fully covered by overgrown bushes and weeds, the joggers have chosen to stay away. The Mantapa built by the erstwhile Maharajas  along a section of the lake bund, can be renovated  to make it an attraction for people from all age groups. A children’s park, with all play equipment, too can come up along the park, thus providing a variety of entertainment for children. However, already there are a few environment-friendly wooden playthings in place.

READ ALSO  This Cop is a fine cook, a traditional doctor and a nature lover
The lake also has a religious environment as Sri Mahalingeshwara Temple built by the erstwhile Mysore Maharajas is still being worshipped by the people living in the vicinity of the lake. Continuing with the tradition, the members of the erstwhile Royal family still offer prayers at this temple. Also, most of the visitors to the lake prefer to have darshan of the deity at this temple, which speaks of the religious importance of the lake as well.
Lingambudhi Kere Lingambudhi Lake M.T. Yogesh Kumar
Unique, unputdownable multi-authored publication
State-level Chutuku Kavigoshti held