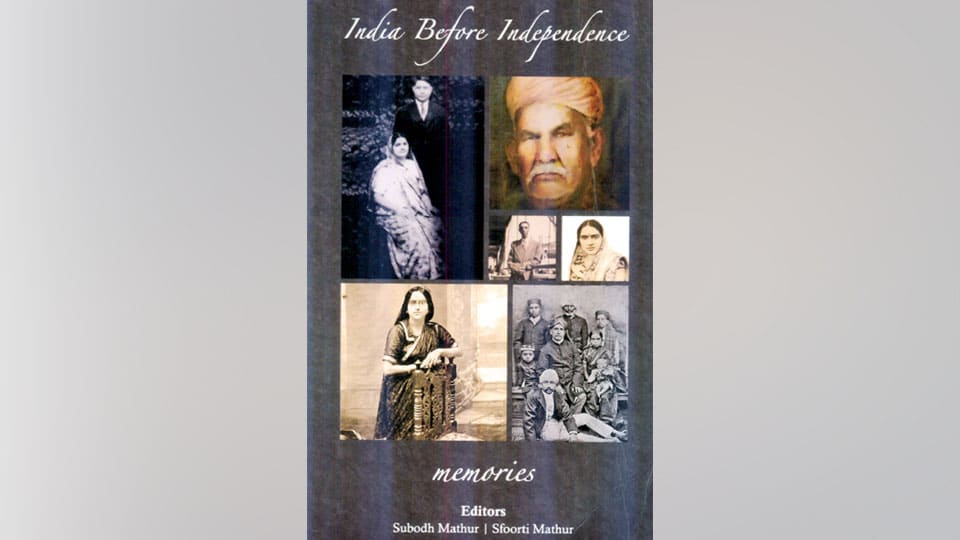 Being a collection of true stories related to the lives of people before India became independent in 1947, the publication is unique in many ways. The narratives by 31 writers make the publication multi-authored, itself a strikingly unique feature.

The  contributors include noted photojournalist T.S. Nagarajan (writing the piece Remembering the Day India Became Free) and expert on National Highways Bapu Satyanarayana (a prolific writer for the country’s widely-read dailies as well as magazines on society-related civil issues, authoring the piece “Ramanna, 105, Not Out”, recounting his father’s life events), both from Mysuru. [Nagarajan was the younger brother of another renowned photojournalist, late T.S. Satyan].

According to the editors, the purpose of bringing out the publication is to convey a sense of life as it happened during those years, sidelining any known political leaders or celebrities of their times. It recounts the lives of several families who were forced by the Partition of Punjab, moving from what became Pakistan to India. The narratives don’t have any story about the Partition itself.

The book is partitioned into five chapters with catchy headings a) National Events, b) India that became Pakistan, c) India that remained India, d) People and e) Human interest, with three chapters placing together five articles each and two chapters eight articles each. The titles of the articles are not only pulse-inducing but also serve to pick and choose any of them according to the interest of readers. Some titles are more compelling than others and having been penned by seasoned writers don’t disappoint as the style is close to both mind and heart of readers.

Yet another unique feature of the compilation is that the writers are from different regions of India including Karnataka, apart from four contributors from abroad. A brief biographical note about each writer not only indicates that all of them are senior citizens but also professionals in a range of fields of human endeavour. Thus, variety of the narratives, not boredom, makes the presentation qualifying the manner of writing to be person-to-person, heart-to-heart.

The images of all authors, some of whom have departed, and the black ‘n’ white photographs, totalling 102 has made the publication to be likened to a Coffee-Table book.

The collection of their articles comprise a few memories of national events, some are personal remembrances and the rest are mini-biographies, a few of which, as the editors have remarked, are fuzzy and selective.

The elderly readers are sure to find the narratives nostalgic while the younger readers may feel a sense of enlightenment about their land’s history.

The material of the publication has originally appeared on the website www.indiaofthepast.org, which includes many more pre-independence and post-independence stories.

Although the book doesn’t contain particulars of its publisher, year of publication and also its price, a telephonic enquiry from one of the authors revealed that the book was published in 2019.

As the articles are true stories about our motherland’s years marked by a chequered past, to say that the publication is just unputdownable is a gross  understatement, as it is priceless in every sense of the term. Its place in the homes of readers is not the Book-Shelf but it is the Coffee-Table to hasten grabbing it anytime of the day for reading pleasure.

Book Talk
When everything turns communal
Lingambudhi Kere: The lake for all seasons needs a makeover