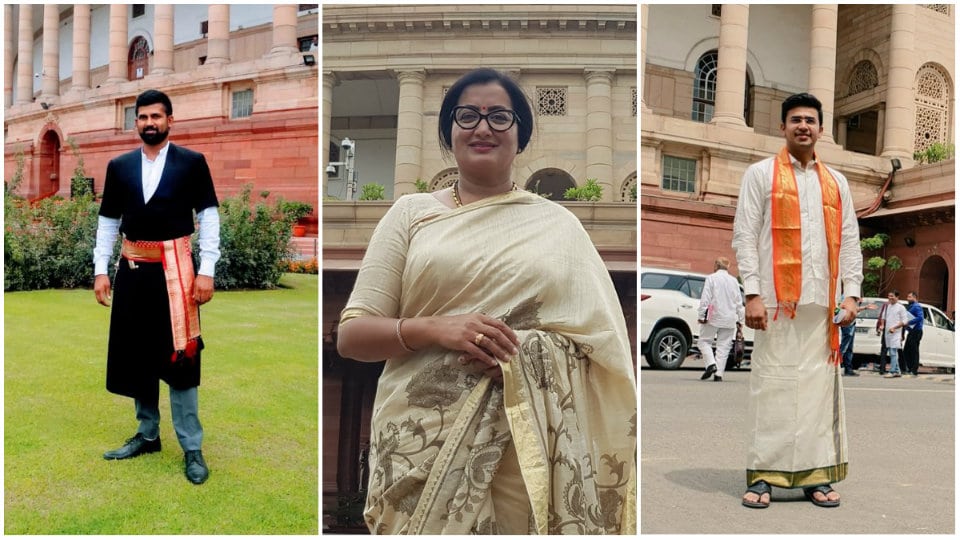 New Delhi: Linguistic diversity of India was on full display in the Lok Sabha yesterday when newly elected and re-elected members took oath in their mother tongues as the 17th Lok Sabha commenced proceedings.

While most of the 28 MPs from Karnataka (25 from BJP) took oath in Kannada, the exception was Union Minister Suresh Angadi, MP from Belagavi, who preferred to take oath in English. When Sumalatha, who trounced Karnataka CM H.D. Kumaraswamy’s son Nikhil Kumaraswamy in Mandya, walked into the Well of the House to take oath, she received a loud applause.

It was a surprise to many when Congress MP Kodikunnil Suresh from Kerala chose to take oath, not in English or his mother tongue Malayalam, but in Hindi.

Pratap Simha, who added a bit of colour to the proceedings by turning up in traditional Kodava attire, said that as he represents Mysuru and Kodagu that has a unique and distinct culture, it was his duty to reflect the same in the Parliament.

He said that his wife Arpitha Simha coaxed him to wear the Kodava dress. “For us Kannadigas, Kannada is not just a language. The entire culture and our feelings are encompassed within the language. Likewise for Kodavas, their language, attire, culture and practices is everything. I am proud of representing the Kodava culture in Parliament,” he said. “Many people whom I met in this August House have appreciated my dress,” the MP added.