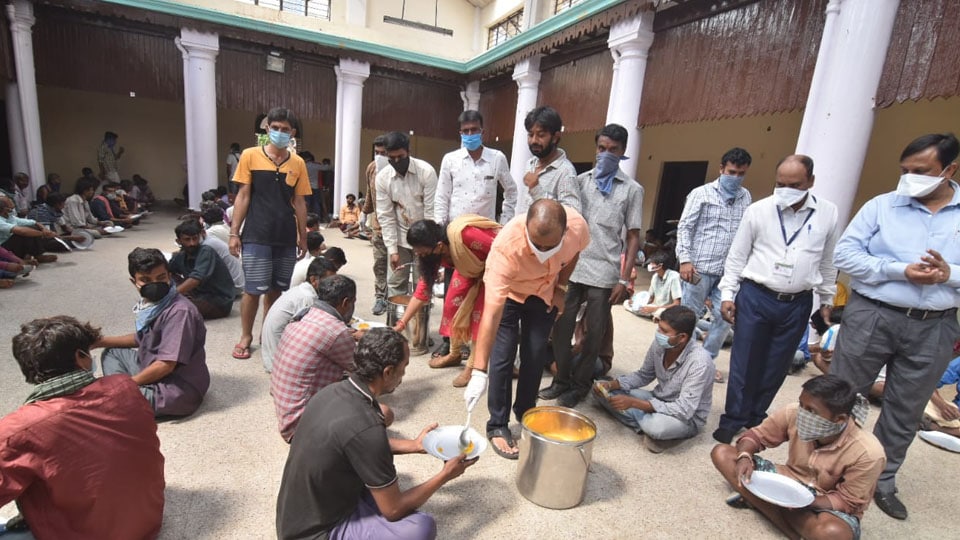 Mysore/Mysuru:  Why does one leave his or her village or town? For better prospects, for a better life for themselves and their families perhaps right? So has been the case for many migrant labourers across the nation who have moved to cities with better infrastructure in search of jobs and better education and life for their children.

The Royal City of Mysuru also has such migrant workers from other districts and some from the neighbouring States too.  The city too has such migrants who came here as masons, contract labourers, cooks, stewards and so on. But now, with the lockdown in place in the country, with no buses, trains or any other means of transport, the woes of these migrants are heart-wrenching.

Although, the district administration, in association with the MCC and MUDA has made arrangements for accommodation and food for these migrants and also their families, which include aged parents, wives and children, nothing is as comforting as being inside their own homes in their own cities, towns or villages.

Now nobody will question this now, especially at a time when every one are confined to homes, but still getting our essential supplies and surviving with sustenance, thanks to the efforts of the District Administration and the State Government.

Apart from these migrants, there are a few others – homeless and poor people (who have no homes and can’t even afford a day’s meal), who are being provided with food, toilets and a place to sleep including blankets and bedspreads.

Close to 3,000 such people are being helped out by the District Administration, MCC and MUDA by placing them at various community halls, hostels and Government School buildings across the Nine Zones of MCC in 65 Wards.

READ ALSO  Patient care: How much Government is spending?

They have set up 17 Centres, “Shelters for the Homeless’ in all the Wards with each Centre having an Officer Designate whose responsibility is to ensure three meals a day, clean toilets and sleeping arrangements for these 3,000 people stuck in the city with no option of going to their own homes.

The District Administration is being helped by many organisations of the city including Rotary, JSS Institutions, Bishop of Mysuru, Mysuru District Journalists’ Association, and Sri Sumathinath Jain Navyuvak Mandali among many others.

Around 20 women and 260 men have been sheltered at Nanjaraja Bahadur Choultry on Vinoba Road and at the Youth Hostel in T.K. Layout with food, toilets and blankets. Members of Sri Sumathinath Jain Navyuvak Mandali distributed blankets to those placed at Nanjaraja Choultry.

Food and drinking water to all 17 Centres and the above mentioned places are provided by only those having ‘Food Distribution Passes’. Volunteers, along with respective Ward Corporators and Designated Officers, with all safety measures in place, distribute meals to these migrants and other homeless and poor people at each Centre.

In case anyone falls sick at these Centres, the administration has also made arrangements for them to be taken to the nearest Primary Health Centres.

“Although we are getting food and have sleeping arrangements, maintaining hygiene, especially cleanliness of toilets becomes a huge issue with so many of us in one place. Even social distancing is a challenge,” said these migrant labourers.