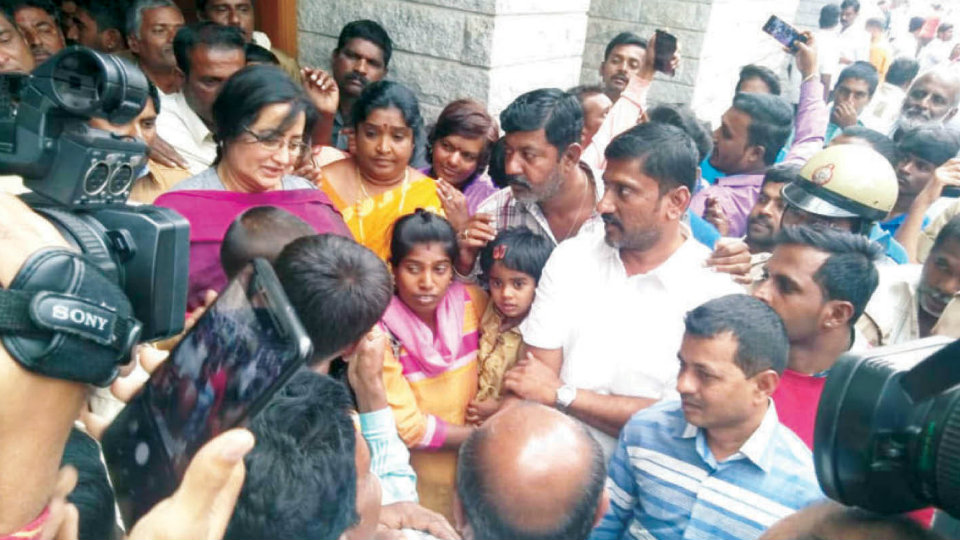 Mandya:  Even as the coalition partners, Congress and JD(S), are yet to come to an understanding on seat sharing for the forthcoming Lok Sabha elections where Mandya and Hassan seats are a bone of contention, Sumalatha, actor and wife of actor-politician late M.H. Ambarish, was approached by Ambarish fans and supporters urging her to contest the Lok Sabha election from Mandya.

A large group of Ambarish fans gathered at his house yesterday to petition Sumalatha to contest the polls from Mandya, a seat that late actor represented thrice in the past. This is the second time in the last two weeks that Ambarish’s supporters have met Sumalatha to demand her candidature from Mandya.

Speaking to her late husband’s fans, Sumalatha said, “I need time to think about this. I need to take the advice of (Congress) seniors and leaders. Ambarish’s identity was with the Congress. At the same time, I don’t want to disappoint you (fans),” she said. “There’s so much to electoral politics. I need to weigh-in on everything before deciding.”

Addressing reporters, she said, “Ambarish’s relationship with the people of Mandya should not be forgotten. That’s why his ardent fans and party workers have been requesting me from the past two months. I don’t want the love Ambarish earned to be lost. I will ask the people of Mandya and I will decide as per that. I had no interest in politics. And if at all I decide to enter politics, it will be from Mandya,” she said and added that she needed time to decide.

Mandya is in the Vokkaliga heartland where the JD(S) claims to hold sway and the seat is currently represented by L.R. Shivaramegowda and the JD(S) is reportedly planning to field Chief Minister H.D. Kumaraswamy’s son Nikhil this time.

To boost Nikhil’s poll prospects, supporters and party workers of JD(S) are distributing free tickets for Kannada film ‘Seetharama Kalyana,’ starring Nikhil Kumaraswamy. Even the Mandya MLAs have taken up the task of distributing tickets and they are doing it door-to-door.

Party workers have been distributing one ticket per head at several villages and people are visiting theatres in tractors and trucks to watch the movie. By doing this, the party workers are ensuring that the movie is running ‘houseful’ and at the same time, Nikhil’s popularity increases. Nikhil Kumaraswamy is scheduled to visit Mandya on Feb. 4 and a special programme has been organised.