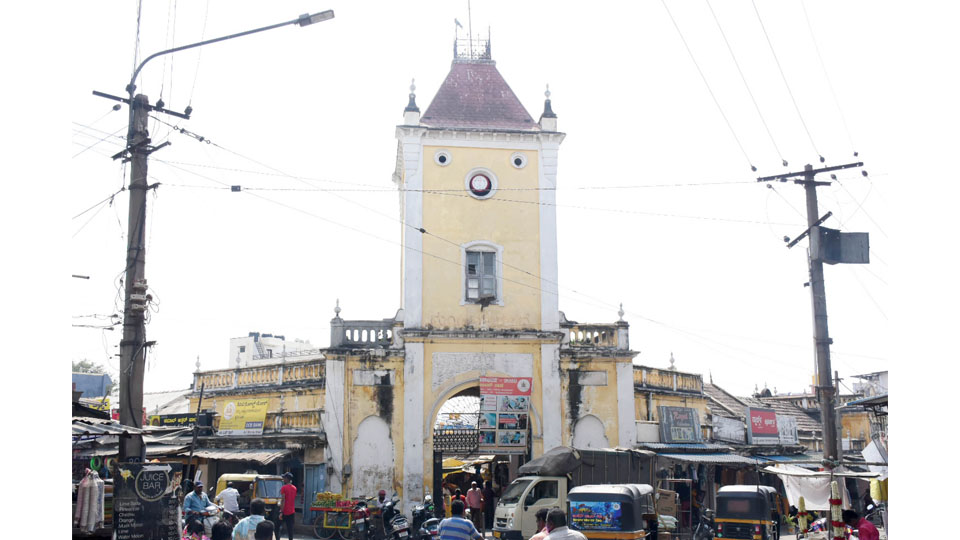 The Mandi Market is one of Mysuru city’s oldest markets that do brisk business worth crores of rupees. It forms a part of a traditional trend of buying from street markets, which have sustained their charm despite the growing culture of malls and everything-under-one-roof swanky shopping complexes.

On sale here is almost everything under the sky. You name it and it is here, surrounded by at least a hundred shopping outlets. The Mandi Market, located in the heart of the city, has retained its characteristics as an affordable marketplace for the poor and middle class. The other two oldest Markets are Devaraja Market and Vani Vilas Market.

The over-a-century-old Mandi Market, which has proved popular among daily wagers, small-income earners, people doing odd jobs and the likes, is meeting the daily requirements of the working class and economically backward sections of the society. It is conventional in nature and stands totally different when compared to the present day malls and shopping complexes.

Mandi Market Tenants Association President Prem Kumar said Muslim community members from across the city and elsewhere will not miss out on shopping for their needs during Ramzan, Bakrid and other festivals here.

The Market is open throughout the night during Ramzan and has many permanent customers from localities such as Udayagiri, Mandi Mohalla, Bannimantap, N.R. Mohalla, Gandhinagar, Kalyangiri, Shanthinagar and  Beedi Colony.

Even the Sawday Road Market located close to Mandi Market too is open at nights during the fasting festival of Ramzan and has many stalls selling groceries, grains, vegetables, fruits, chicken, mutton, fish, fruits and the likes.

These traders and businessmen, apart from promoting their own business, contributed a lot for the overall growth of the Market. However, it is unfortunate that none of the businessmen who sacrificed a portion of their earnings for the development of the Market are alive now, Prem Kumar explained.

The Mandi Market has a small welcome arch on Benki Nawab Street apart from the main one at the entrance gate and the Market was built using lime mortar. Cement was used only recently for repairs.

The Mandi Market, which is 120 years old now, was built by Chamaraja Wadiyar X, according to heritage expert Prof. N.S. Rangaraju.

“The architectural style of all the three Markets (Devaraja, Vani Vilas and Mandi Markets) is similar and they were built around the same time taking into consideration the then population, he said.

All the three Markets were built using bricks, stones and lime mortar and interestingly, steel was not used in any of the three structures. All of them have Madras roofs and the walls are 9 to 12 inches in thickness. Also, teak wood slabs too were used in the construction, explained Prof. Rangaraju.

“The Market has a broad entrance and a tall welcome arch and has stone-slab flooring which makes cleaning easy. All the three Markets are heritage structures,” Prof. Rangaraju added.

The Mandi Market also features a block meant exclusively for mutton trading. A fish market also exists adjacent to this block. However, it is yet to start functioning. It was built by the Mysuru City Corporation in 2013-14 at a cost of Rs. 74.67 lakh out of the National Fisheries Development Board (NFDB) grants.

According to traders, though it has been years since the fish market was built, it has not started functioning and even the local Corporators don’t seem to be keen on its opening.

The Mandi Market, which is a square box like structure, adjoins Benki Nawab Street and Akbar Road. The Market has stalls in all the four directions and these stalls stand like a wall for the entire Market premises. There are 13 stalls on Akbar Road, 20 on Benki Nawab Street, 96 inside and 14 stalls selling mutton. All these stalls are let out on monthly rent.

Besides, there are 48 stalls that are let out on a daily rental basis. The Market has only the ground floor and the line of stalls itself acts like a wall on all the four sides which is something special to note.

With the MCC planning to renovate the Market, Prem Kumar observed that the Market would have been sturdier and safer had the authorities taken up regular maintenance works. But it is somewhat satisfactory to note that the Market still remains sturdy.

“This Market does not get white wash even for Dasara and as far as I know, it was painted only in 1984 and 1995. But the MCC has not been able to build a Market on the lines of Devaraja, Mandi or Vani Vilas Markets. Foreign tourists visit the Mandi Market even today for their shopping needs,” he said.

Chamaraja MLA L. Nagendra had inspected the Market about two months ago and the MLA discussed the issue of renovation with traders, vendors and other stakeholders. “We the traders want the Government to renovate Mandi Market without disturbing the present heritage character and without altering the architectural style, which is unique in nature,” he added.