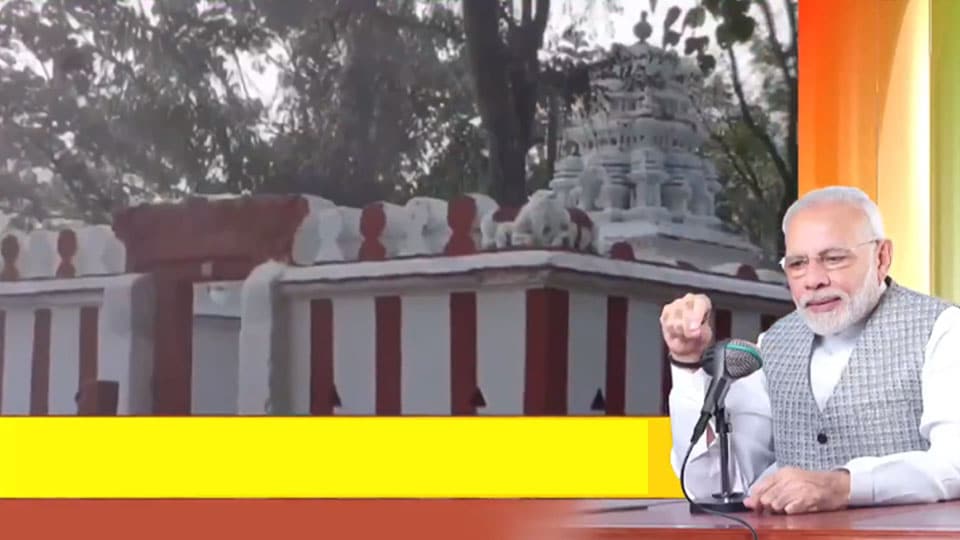 Mysore/Mysuru: In the 72nd edition of his monthly radio programme and the last ‘Mann Ki Baat’ of the year 2020 yesterday, Prime Minister Narendra Modi appreciated “Yuva Brigade” for restoring a 300-year-old Temple in Srirangapatna which was forgotten by people and had remained in a dilapidated condition for past several years

The Yuva Brigade’s remarkable feat, in fact, was first published in Star of Mysore on Dec. 4, 2020 along with photographs under the title ‘Yuva Brigade restores sheen of Ganjam’s forgotten Temple.’

Here is what Modi said:

My dear countrymen, the letter that is in front of me now bears two large photographs. These are photos of a Temple and depict ‘before’ and ‘after.’ The letter which is with these photos talks about a team of youth which calls itself Yuva Brigade. In fact, this Youth Brigade has transformed an ancient Shiva Temple named Veerabhadraswamy in Srirangapatna in Karnataka. All around in the Temple there were widespread weeds and shrubs…so much that even travellers could not have recognised the existence of a Temple there. One day, some tourists posted a video of this forgotten Temple on social media,” the PM said.

“When the Yuva Brigade saw this video on social media they could not bear it and this team decided to renovate it together. They removed the thorny bushes, grass and plants that had come up in the compound of the Temple. They did repair and took up construction wherever required. Seeing their good deed, the local people too extended a helping hand. Some offered cement, others offered paint. People came up with many other such contributions,” he narrated.

Continuing, Modi said, “All these youths belong to different professions. Hence, they took out time during weekends and worked for the Temple. They arranged for electricity connection too for the Temple besides getting doors installed, thus restoring the old grandeur of the Temple.”

“Passion and firm commitment are two means through which people can achieve every goal. When I see the youth of India, I feel delighted and assured. Delighted and assured because the youth of my country has the ‘Can Do’ approach and the ‘Will Do’ spirit in them. No challenge is too big for them. Nothing is out of reach for them,” Modi said, diverting to other topics.

Speaking to SOM on the PM’s encouraging words, Chandrashekar, the Yuva Brigade in-charge of Mysuru, said that the PM’s words were motivating. “We had sent a letter containing the report and photographs to the Prime Minister’s Office (PMO). The PM has literally read out the entire report published in Star of Mysore and I am happy that our work has got national attention. This gives us a boost and we will undertake such programmes with renewed vigour,” he said.

Chandrashekar said that after the Temple was renovated and given a fresh coat of paint by the Brigade, there is a steady stream of visitors to the historic Temple. “Our efforts have borne fruits,” he added.