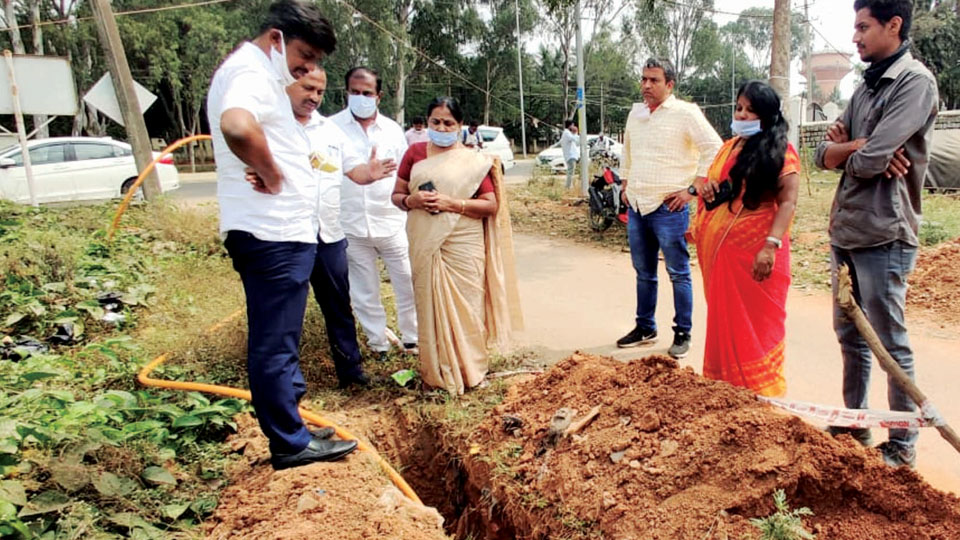 Mysore/Mysuru: While the pros and cons of direct-to-home Piped Natural Gas (PNG) in Mysuru is being discussed in public and private platforms and on social media, thanks to the heat and dust it has raised in the last one month or so, a team from the city, led by Mayor Sunanda Palanetra, visited Tumakuru on Feb. 7 to have a first-hand information on how the PNG project is being implemented there.

Though it was a private visit on the invitation of Tumakuru Mayor Krishnappa, the visit assumes significance as a lot of debate is going on regarding the issue. Other members of the team were Corporator and former Leader of Opposition in the MCC M.U. Subbaiah, Corporators Ramesh and Shivakumar.

Speaking to Star of Mysore on the visit and the progress of the gas pipeline project in Tumakuru, Mayor Sunanda Palanetra said that Tumakuru has got the project as part of Smart City allocation where Rs. 900 crore is being methodically spent.

“Tumakuru has seen tremendous development and every aspect of a Smart City — be it LED lighting, gas pipeline and infrastructure — is being systematically developed,” she said.

“I had met the Tumakuru Mayor at the inauguration of the Kashi Vishwanath Dham where Mayors from over 120 cities were in Varanasi for the All-India Mayors’ Conference last December. We went to Tumakuru to study the PNG project so that we can inform others about it,” she said.

READ ALSO  Wait for piped gas project to get longer

The project is an efficient system to supply PNG directly to homes and trenches that resemble internet cable digging are being dug up by the side of the roads, without disturbing the existing water, UGD and other connections. There are switches at particular intervals and the connections are given directly to kitchens where also there is a facility of switching on or off, Sunanda said.

“Overall, the project that is being implemented in Tumakuru is efficient and the fuel is clean. Once the project is realised, 40 percent of the gas bills will be reduced. Already 70 percent of the works have been completed as part of the Smart City initiative,” said Corporator Subbaiah.

“No one in Mysuru — not even Corporators or the MLAs — is against the gas project. As the work is being done in phases, there are concerns over road digging and how the road will be restored. In fact, if there is a delay in road restoration, Corporators and MLAs will have to face public backlash and it is a loss of face to them. If the approvals are speeded up and works are carried out at a faster pace, then all controversies can be avoided,” the Mysuru Mayor said.

The Petroleum and Natural Gas Regulatory Board (PNGRB) had called for bidding of projects for 65 GAs across India, and in Mysuru region, AG&P Pratham India, the city gas distribution arm of the Singapore-headquartered AG&P Group, has bagged the tender. Likewise, Indian Oil Adani Gas Private Ltd (IOAG) has got the bidding in Hubballi-Dharwad.

Successful bidders who have won the projects will construct city gas stations or mother stations, lay the main pipeline and distribution pipelines, in addition to installing CNG stations.

“In Hubballi-Dharwad, 19,500 houses are already getting piped gas and the project is also being implemented in Bengaluru by GAIL Gas Limited (GGL),” Subbaiah said.

In addition to being cleaner and greener, residents will be spared the hassle of booking a cylinder since natural gas will be supplied to them round-the- clock. It is also much safer since the threat of fires in the kitchen will be greatly reduced. Natural gas is lighter than air and hence, will not accumulate in a confined space. It is eco-friendly and combustion-free,  the MCC Corporator added.