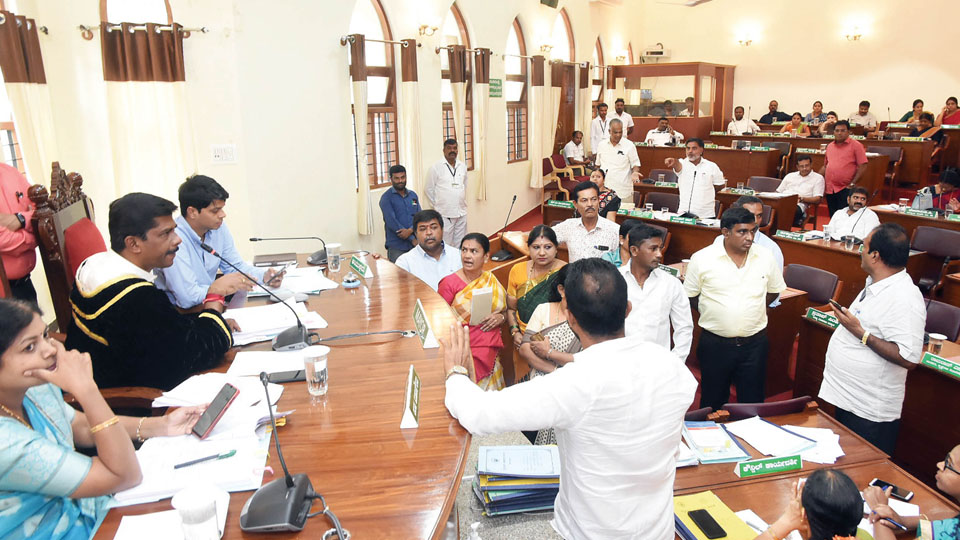 Mysore/Mysuru: The first Council Meeting chaired by Mayor Shivakumar was drowned in disturbance and loud noise as Corporators objected to over 10 to 15 mobile signal antenna booster poles —for better reach and coverage — in heritage zones. The second issue that dominated the proceedings was the pending election to the Chairpersons of various Standing Committees.

For the record, BJP’s Shivakumar and Dr. G. Roopa were elected as Mayor and Deputy Mayor of the Mysuru City Corporation (MCC) respectively at the Mayoral polls held on Sept. 6. Due to din and inaudible proceedings, the meeting was adjourned twice — one up to 15 minutes and later it was adjourned till 2.30 pm so that the Corporators can have a peaceful lunch and come with new issues.

As soon as the meeting began in the presence of Deputy Mayor and MCC Commissioner G. Lakshmikantha Reddy, JD(S) Corporator SBM Manju raised the issue of mobile towers and the booster poles in heritage zones. Flashing the work order issued in 2019, he said that there has been an ‘administrative lapse’ as of the 72 towers (poles) permitted to be installed across the city, over 10 to 15 come under the core heritage zones.

“The permission to erect the antenna booster poles was given in 2019 for better network services. Of the 72 poles, most of them come under the heritage zone. The work order mentions that the task must be completed in 180 days. Who gave the permission? The Council was not informed about this. Which officers were behind this?” he asked.

In 2019, the Congress was ruling the MCC and Manju’s direct questions irritated the Congress members who under the leadership of former Mayor Ayub Khan denied allegations of ‘administrative lapse’. Instead, the Congress targeted JD(S) and BJP. This led to din and Corporators resorted to blaming one another for the mess and the whole issue took an inconclusive end as it happens in most MCC Council meetings.

Raising the issue further, Manju said that the contractor had not completed the mobile antenna works and was still undertaking works in the night. “First of all, there is a serious violation of heritage rules as most of the towers are coming up in the core heritage zone including K.R. Circle, Mysore Palace and Metropole Circle (Field Marshal K.M. Cariappa Circle). Secondly, how can a contractor take three years for the work that has to be completed in 180 days,” he questioned.

The second issue was the election to the Standing Committees where Corporators trooped into the Well of the House and protested. They alleged that the polls were deliberately being postponed by parties who have vested interests. This too was denied by the Mayor and a war of words ensued between the Corporators.