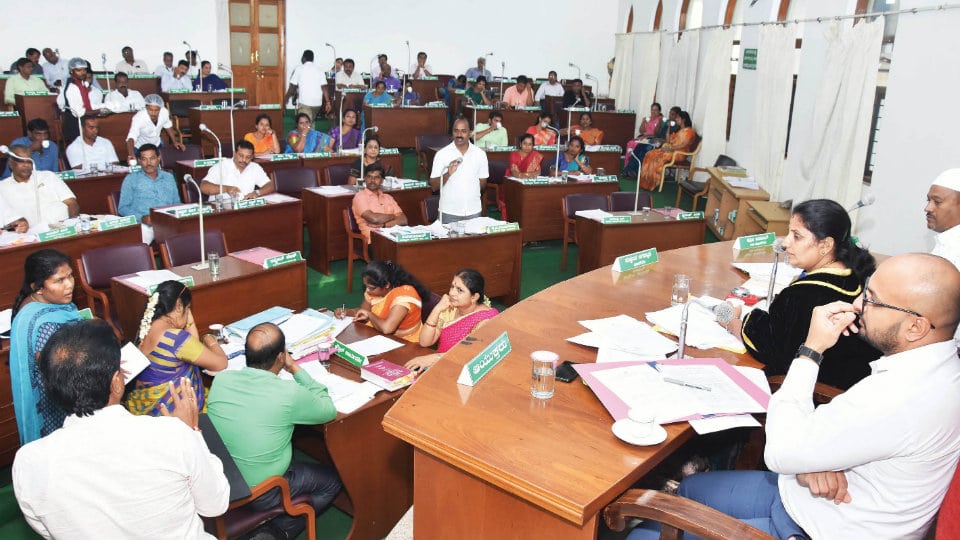 MCC cancels transfer of 12 layouts from MUDA to its fold

Mysuru: Mysuru City Corporation (MCC) at the Council Meeting held at MCC premises here yesterday decided to cancel the process of transferring 12 private layouts from Mysuru Urban Development Authority (MUDA) to MCC which was initiated during the period when MUDA Commissioner P.S. Kantharaju was officiating as in-Charge MCC Commissioner.

Announcing the decision at the meeting, Mayor Pushpalatha Jagannath said that the topic of transferring the 12 layouts was not tabled before the MCC Council.

She further said that the process of transferring 73 layouts from MUDA to MCC over the last two years would also be scrutinised and any transfer done without the knowledge of the Council would also be cancelled.

She clarified that teaming with the respective Corporator and the Advisory Committee, the basic infrastructure of all the transferred layouts would be scrutinised and further action would be taken.

The question posed by Ward 59 Corporator Sunanda Palanetra seeking the basis for transfer of layouts and details of basic facilities to be provided to a layout before qualifying for a transfer triggered a long discussion at the meeting eventually taking a decision to cancel the recent transfer of layouts. She narrated the pitiable condition of a few layouts in Ward 59 and challenged the contention of MUDA on having provided needed basic infrastructure.

Voicing support, Corporator Shivakumar said that MCC owes Rs.160 crore to contractors and ruled out providing facilities to new layouts. Hence, he urged MCC to provide basic infrastructure to all layouts transferred from MUDA or insist MUDA to bear the needed expenses.

Former Mayor Ayub Khan questioned the rationale behind MCC accepting the new layouts transferred from MUDA knowing well the fund crunch in MCC which raises a doubt over MCC administration itself.

Corporators Prema Shankaregowda and SBM Manju (MUDA Member) questioned whether any layout could be transferred from MUDA to MCC without the knowledge of the Council.

Clarifying the meeting, Zone Assistant Commissioner Shivananda Murthy said that the topic of layout transfer should be tabled before the Council.

He added that the Audit Committee had identified that out of the 73 layouts transferred from MUDA to MCC from 2017 onwards, 12 have skipped the attention of the Council during the tenure of Kantharaju as in-charge MCC Commissioner.

Corporator and BJP leader B.V. Manjunath demanded the cancellation of the process of transfer of the said 12 layouts and insisted on constituting a Committee to scrutinise the facilities provided at all the transferred layouts.

Corporator Ramesh opined that if the process of transfer of the said 12 layouts, all in NR constituency, is cancelled, the same should be applicable to transferred layouts in KR and Chamaraja Constituencies.

Bowing to the demands, Mayor announced the decision to cancel the transfer process of the controversial 12 layouts and scrutinise all other transfers.

When Ward 59 Corporator Sunanda Palanetra questioned the veracity of the alleged dubious transfer of 12 layouts from MUDA, Corporator SBM Manju, who is also a MUDA Member, attempted to clarify apparently trying to defend MUDA.

Irked by that, former Mayor Arif Hussain asked Manju to speak on behalf of MCC and not MUDA. That triggered a row between the two. Sunanda insisted on the Mayor to answer the queries.