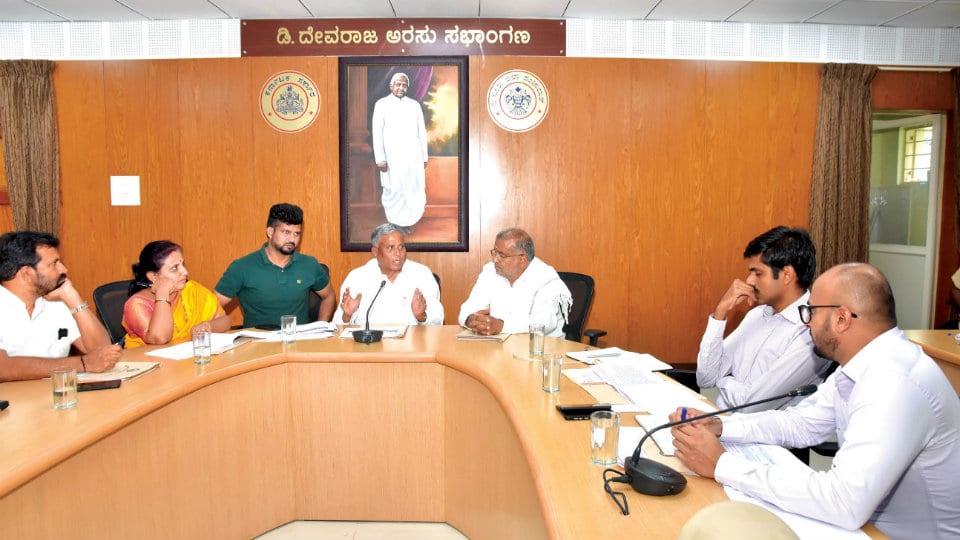 Mysuru/Mysore: Instructing MCC officials to prepare a Rs.200-crore budget plan and estimate for improving the city’s civic infrastructure, District Minister V. Somanna assured to get the plan sanctioned from the Government.

Chairing a meeting to discuss Mahatma Gandhi Nagara Vikasa Yojana (MGNVY) with Corporation officials at ZP premises here on Friday, Somanna said the city being a prime tourist destination, needs to have proper drinking water and UGD facilities and other civic amenities such as roads, streetlights and parks.

Stating that Chamundi Hill will be brought under the jurisdiction of the MCC, Somanna directed the Corporation officials to come up with a survey report, which will be placed before the Cabinet for approval.

Maintaining that the merger of Chamundi Hill with MCC will enhance the revenue of the civic body, he said that the move will also bring down the MCC’s dependency on the Government for funds.

MCC Commissioner Gurudatta Hegde apprised the Minister that of the Rs.150 crore sanctioned under MGNVY, Rs.50.76 crore was utilised to adjust for pending bills of JnNURM Drinking Water Project and Rs.10 crore was adjusted for project overshoots, thus leaving the MCC with only Rs.83.36 crore for carrying out developmental works in the city.

In response, the Minister pointed out that the Corporation was not upto the mark in revenue collection. Noting that the MCC’s tax collection is below its potential, he directed the MCC Commissioner to introduce online tax payment system soon, as it encourages more people to pay their property tax on time. Also instructing the Commissioner to convene a meeting of Revenue officials to address the issue, Somanna ordered for action against erring officials in the Revenue Section of the MCC and also for the intervention of the Deputy Commissioner to set right things in the civic body.

Urging the Government for special grants for development of Mysuru City, Chamaraja MLA L. Nagendra said the Government should take a decision on demolition or renovation of heritage structures — Devaraja Market and Lansdowne building.

The MLA further said that there were too many Government Offices and Educational Institutions housed in heritage structures in city. Nagendra also urged the Government to regularise Vijayashreepura Layout by collecting betterment fees from citizens and to resolve solid waste management issue, that has been haunting the city.