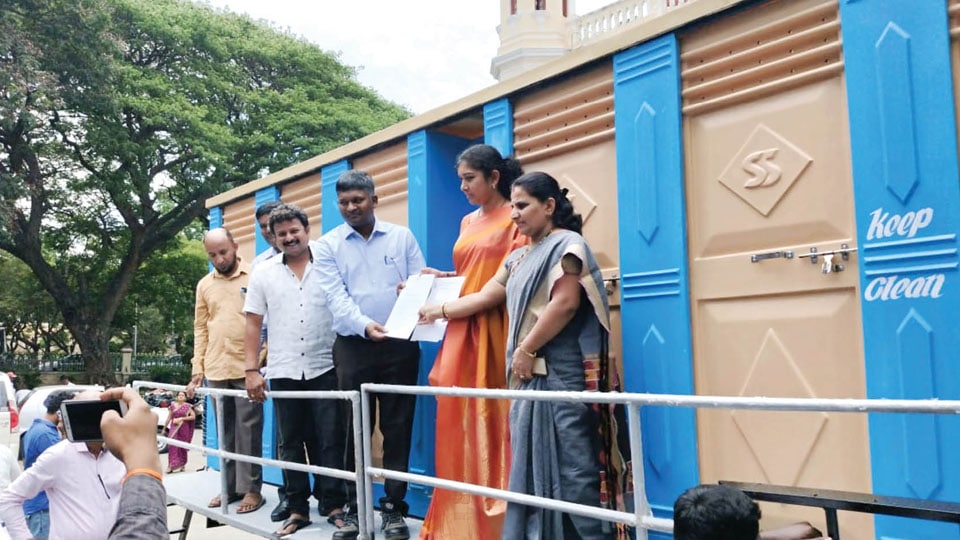 Mysore: Sanitation is a massive problem in India, both in the urban and rural context. With increasing population, the problem is growing. Open defecation and lack of facilities in the urban regions has created a situation that needs urgent attention.

As a solution to this ever-growing problem, the Mysuru City Corporation (MCC) has come up with an idea of asking industrialists to donate mobile toilets. And responding positively, the Hindustan Petroleum Corporation Limited (HPCL) has donated two mobile toilets under its Corporate Social Responsibility (CSR) funds to the MCC. The Civic Body is planning to procure over 100 such toilets.

Throughout the year, Mysuru city hosts many mega events like Dasara, Open Street Festival, Yuva Dasara, Yoga Day, Food Festival, Flower Show and other events. During these events, it is the responsibility of the MCC to provide sanitation and drinking water facilities.

Such mobile toilets are useful especially in mega events when there is no provision for toilets around venues.

Also, it may be recalled here that in the absence of such mobile toilet facilities, temporary toilets were dug for the security personnel and the Police at the Maharani’s College of Commerce and Management on Valmiki Road recently where the counting of votes were held for the Mysuru-Kodagu Lok Sabha constituency.

The MCC that discussed the sanitation issue came up with the idea of requesting industries to spare their CSR funds to donate mobile toilets to the Civic Body. This, according to MCC will ease the sanitation problem in a major way.

The proposal was placed before the DC who in turn conveyed the same to the District Industries Centre. Accepting the proposal, the HPCL Mysuru that locally maintains and operates the Mangaluru-Hassan-Mysuru-Bengaluru LPG pipeline donated two mobile toilets worth Rs.17.98 lakh under CSR component as per the Companies Act, 2013, Section 135.

Each mobile toilet unit has 12 toilets (six on either side) and in all, there are 24 toilets in two units. The toilets can be hauled by a vehicle and can be carried to any place of choice. They are equipped with lights and hand-washing facilities and can be connected directly to any underground drainage line.

The toilets were officially handed over to the MCC on June 13 by T. Obaiah, Senior Manager (Operations), HPCL, in the premises of MCC. Mayor Pushpalatha Jagannath, MCC Commissioner Shilpa Nag and other officials were present.

The mobile toilets are the first-ever CSR-funded facility received by the MCC and officials said that the Civic Body looks forward for such support from the corporate sector.

The mobile toilets have been handed over to the Underground Drainage Section of Vani Vilas Water Works that will maintain them. Apart from mobile toilets, the MCC has also sought equipment for city cleaning and solid waste management, including dustbins across the commercial hubs, officials said.