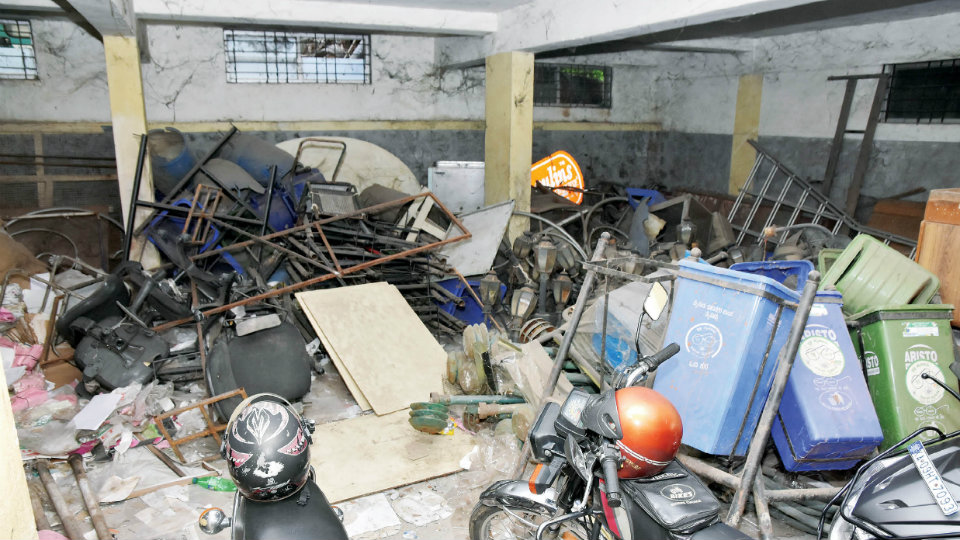 Mysuru: The Mysuru City Corporation (MCC) that gives lofty speeches and spends crores of rupees on waste management, Swachh Bharat and open defecation-free campaign, has to first put its own house in order. It is setting a bad example for people by converting its own building basement parking lot into a dumpyard.

Interestingly, the MCC officers give lectures to the owners of other commercial establishments and hospitals to make the best use of their basements to park vehicles and ease the parking problems plaguing the city. The situation at MCC basement is so bad that officers and employees are scared to enter the place as there are a couple of snakes that have taken shelter there as rats are available in abundance.

Located in the heart of the city on Sayyaji Rao Road, the MCC office has a new building that houses Ashraya Section or the Election Section. While constructing the building, a wide basement was incorporated in the plan to make space for underground parking. After the completion of the building, officers and staff used to park their vehicles there and everything was running as per plan for a few months. But when the renovation of the MCC’s old heritage building was taken up two to three years back, the old furniture at the offices of MCC Deputy Commissioners, Revenue Officers and Assistant Commissioners was dumped temporarily at the basement. Gradually, many more things, waste, unused materials, Swachh Bharat dustbins, iron rods and sheets, benches, tables, chairs, files, waste gunny bags, shelves, old vehicles, ornamental lamp posts, pipes, ladders and even metal advertisement hoardings were dumped there.

The waste is gathering dust and the whole place stinks and a musty smell permeates the environs. As this precious parking space is lost, officers and employees park their vehicles in front of the building. MCC employees told Star of Mysore that there are a lot of rodents and rats there and naturally, the place has turned a snake habitat. “We have seen snakes slithering here and there and we are scared even to enter the premises,” they complained.

Every year, the MCC spends crores of rupees in Swachh Bharat Mission taking several cleanliness measures to keep the city clean. “But unfortunately, the MCC’s basement itself is not clean and the officers have ignored the smell and stench right under their very noses,” said a visitor to the MCC. He added that there is no single toilet facility for hundreds of visitors who come to the MCC every day.

There is a toilet at the backside of the building that is badly maintained by the MCC that preaches and asks people to practice open-defecation-free premises. The Health Section of the MCC has the responsibility of maintaining this toilet and surroundings. Many people come to the MCC Office and the Contractors’ Association Building day in and day out. “All these people use this stinky toilet and the smell is horrible and nauseating. One can’t even venture near the toilet and this forces people to relieve themselves behind the walls. So much for the MCC’s Open Defecation-free Policy,” said another visitor.