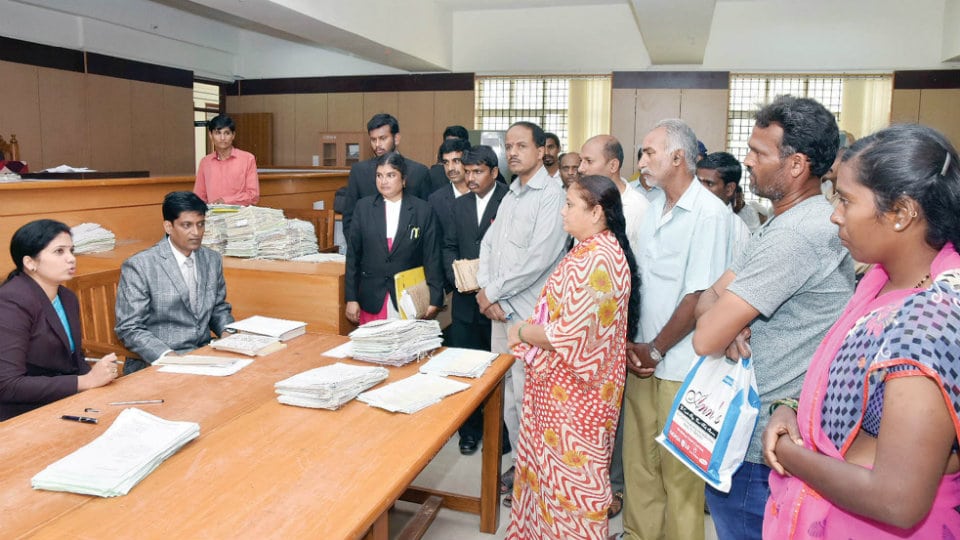 12,500 cases taken up across the district

Mysuru: The day-long National Lok Adalat conducted by the Karnataka State Legal Services Authority in association with the District Legal Services Authority (DLSA) began at the City Law Courts complex and at the Malalawadi Court Complex (behind Apollo Hospital) this morning, with a huge number of litigants from across the city attending the Adalat.

This is the third National Lok Adalat being conducted this year with the earlier ones held  on Mar.9 and July 13. The fourth and the last one this year is scheduled to take place on Dec.14. The Lok Adalat is one of the alternative dispute redressal mechanisms and is a forum where disputes/cases pending in the court of law or at pre-litigation stage are settled/compromised amicably.

A total of 31 Lok Adalat benches have been set up at the two Court Complexes in city, while two Lok Adalat Peethas were set up at each of the six Taluk-level Courts of the District — Nanjangud, K.R. Nagar, H.D. Kote, Periyapatna, Hunsur and T. Narasipur. Each bench had a Judge and a panel advocate appointed by DLSA. As far as the city is concerned, 1,279 cases pertaining to Bank Recovery suits will be taken up among other cases in today’s Adalat.

Speaking to SOM, Judge and DLSA Member Secretary B.P. Devamane said that about 12,500 cases will be coming up at Lok Adalats being held today across the district. Stating that the DLSA has set an objective of resolving more cases than last time, Devamane appealed the people to take this opportunity for quick settlement of their matters (both pending litigation/pre-litigation) through the Adalat.