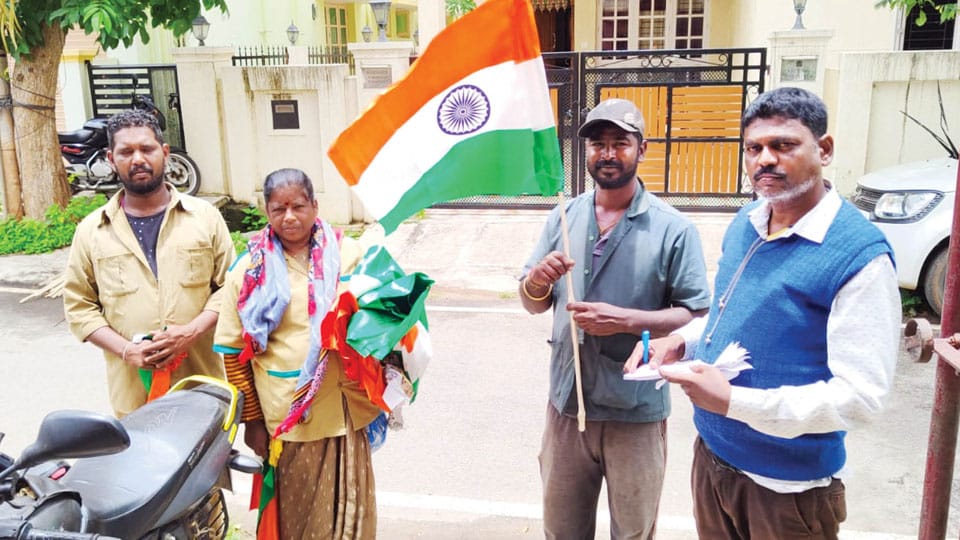 Mysore/Mysuru: In a bid to ensure the success of the Har Ghar Tiranga campaign marking the 75th year of Independence, the Mysuru City Corporation (MCC) has launched an initiative for selling at least 1.5 lakh Tricolour flags.

Staff at all nine Zonal Offices have been assigned the task of selling flags to households. Each flag is priced at Rs.25 and a receipt is issued for every purchase.

While the big zonal offices have been given the task of selling 30,000 flags, the smaller ones have been set at a target of 15,000. The initiative launched a couple of days ago has drawn good public response, with 200 to 300 flags getting sold within minutes in some of the MCC wards.

MCC Zone-3 Zonal Commissioner B.M. Prakash said that his zone was given 30,000 flags for selling. Pointing out that 8 MCC wards covering localities such as Sharadadevinagar, Kuvempunagar, Bogadi, Dattagalli, Ramakrishnanagar, T.K. Layout etc., come under Zone-3, he said that all the 30,000 flags were sold in just 2 days. Along with the drive, an awareness on the Har Ghar Tiranga campaign too was held, he added.

MCC Additional Commissioner Roopa said that as per the Government order, on Azadi Ka Amrit Mahotsav, each flag is sold at Rs. 25. Pointing out that 1.5 lakh flags that were given by the district administration has been distributed among all nine Zonal offices, she said that the MCC has printed receipt books which are used for issuing receipts to the people upon flag purchase.

The flag sales drive has been getting a good response, with people voluntarily coming forward to buy flags, she added. Murugesh, an MCC employee who has been assigned with the task of flag sales at J.P. Nagar’s A Block, said that people have been voluntarily coming forward for purchase. The enthusiasm is so much in the area that some of the residents are buying more than two flags, he added.