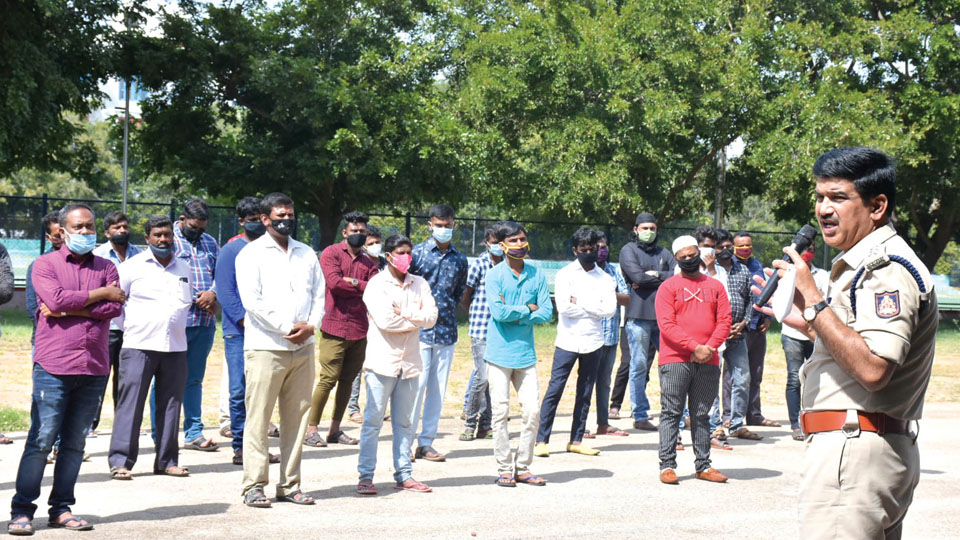 Mysore/Mysuru: As part of annual Crime Prevention Month, the Mysuru City Police are leaving no stone unturned to ensure that the Heritage City remains free of crime at least for a month. From warning rowdy elements to one-on-one meetings with resident welfare associations and other stakeholders, the Police are ensuring a fearless and a law-abiding city.

A rowdy parade was held by Narasimharaja (NR) Sub-Division ACP M. Shivashankar where he warned the anti-social elements of strict action if they trouble residents in the name of property and real estate dealings. “Go in a legal way and do not threaten residents in the name of buying, brokering and selling properties. Avoid activities like roll-call, hafta, group clashes, threatening, etc. If any such activities are found, the Police will take action including arrest,” he warned.

The ACP said that there would be no place for anti-social elements and trouble-mongers. “Anyone trying to foment trouble, terrorise or spread panic and resort to violence against peace-loving denizens would be dealt with firmly,” he said.

While appealing rowdy-sheeters to turn a new leaf and lead a peaceful life along with fellow residents, Shivashankar also hinted that calls made and received on their mobile numbers would be monitored through the Integrated Command Control Centre.

“All rowdy-sheeters across the city are being strictly monitored by jurisdictional Police Stations. If you think you are above the law and cannot be touched, be ready to face action. Our Department is accessible to everyone. Any complaint will be immediately acted upon. If any act of crime points towards you, be ready to face the music,” Shivashankar said.

Speaking to Star of Mysore, DCP (Law and Order) Dr. A.N. Prakash Gowda said that as part of the Crime Prevention Month, all Police Stations, ACP and DCP Offices will focus on illegal activities including smuggling, human trafficking, drug peddling, thefts and burglaries. The Police teams will also make efforts to trace missing persons and prevent atrocities on women and children, he added.

A meeting was held on Monday by City Police Commissioner Dr. Chandragupta along with senior Police Officers wherein he asked the officers to direct their subordinates to update all Police Station records. He also directed them to focus on solving pending theft and robbery cases.

Special attention must be given to protect the rights of women and children and see to it that the vulnerable population is not harassed. Awareness campaigns must be held as part of Crime Prevention Month to sensitise public about bad effects of alcohol and drugs. At the same time, steps must be taken to curb drug menace, he said.

The Commissioner also directed the Officers to undertake awareness campaigns on public safety. Also, the seized vehicles that are rusting in front of Police Stations and their backyards must be disposed of, he added.