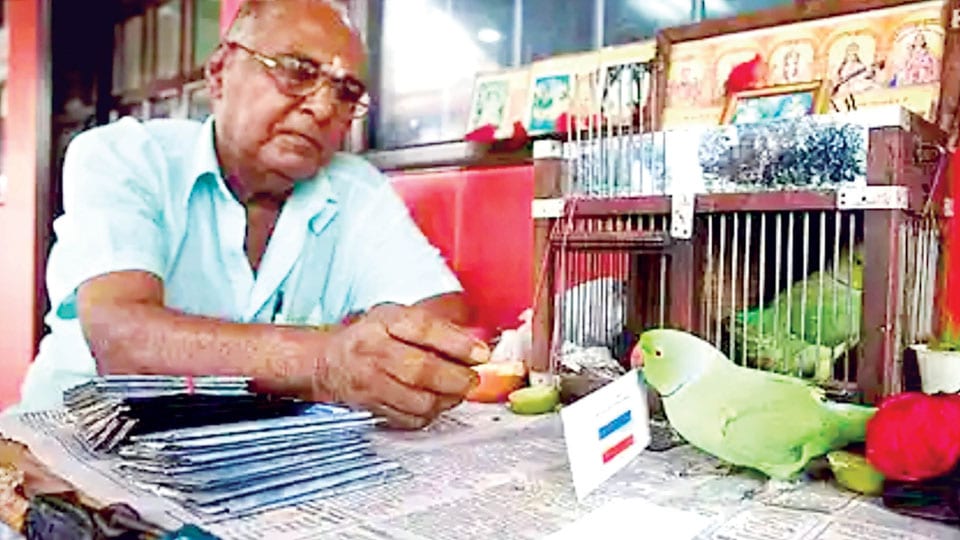 After reading my last article about my childhood fascination for roadside fortune-tellers and their fortune-telling parrots, many readers responded with different emotions. While some said that they had never known of the existence of such fortune-tellers, many others said that with their lifelong existence on the roadside, their plight seem very pitiable. A few others said that the plight of their parrots was the most pitiable because of their cramped, lifelong confinement to tiny cages and a boring diet of the same grains when they were meant by the maker to be free-flying birds feasting on the most varied kinds of fruits and berries!

I agree that all these views have much relevance but I would like to point out here that thanks to our existing wildlife regulations, this profession has almost vanished in our country because today it is a crime to keep and rear wild animals and birds as pets. That has certainly ensured that fortune-tellers are no longer a threat that brings misfortune to any species of parrots, at least in our country. However, I am unable to say if the lives of the practitioners of this kind of fortune-telling have seen better fortunes over the years!

But there is an interesting development here. In some parts of Andhra Pradesh and Tamil Nadu too, some fortune-tellers are now using trained house rats to don the role of parrots and keep themselves safe from the long arm of the law and yet make a living. And, since there is no ban yet in our country on keeping already house-bound rats in captivity and putting them to some use, this may soon become the norm. This change may in fact elevate rats from their much-despised position of being bringers of pestilence to a more dignified one of being harbingers of good fortune. But all this takes time because it is not easy for any rat to shed a bad reputation and acquire a good one in one lifetime, which should be a noteworthy eye-opener for human beings too!

And, people too, who anxiously seek to take a peek into their future, will need more than a lifetime, to shift their trust from parrots to rats which is quite understandable. But if you are still keen on knowing your future and not too keen on whether it is a rat or a parrot who is doing the honours, you can find rat fortune-tellers on Marina Beach at Chennai and also much nearer home at the Hogenakkal Falls. It is said that rats are harder to train than parrots but still some have been trained to walk on two legs like humans and do somersaults and even make a gesture of Namaste which becomes an added asset when it comes to attracting prospective customers!

But if you are a traditionalist and can never trust your future and fortune to a lowly rat however well-trained, all is not lost for you. You can head straight to Singapore where parrot fortune-telling is still completely legal and legit and much sought after. Along the Serangoon Road, in the locality very aptly called ‘Little India’, you can see at regular intervals, fortune-tellers sitting not on the pavement but at tables, with their trusted pets perched either on their cages or sometimes even on the shoulders of their keepers, in an interesting kind of self-advertisement! Interestingly, while there are fortune-tellers of all kinds and all races in Singapore, the parrot kind are almost all Tamils who have migrated from India and made Singapore their home. They are all hugely popular with tourists and natives alike and are making good fortunes, without taking any guidance from their parrots for themselves!

The story of one such person in particular stands out most notably. About ten years ago, a fortune-teller, M. Muniyappan who went all the way from Tamil Nadu to Singapore in search of better fortunes thirty-five-years ago, started his trade with his two pet male parrots, Mani and Muni just outside the Komala Vilas Restaurant on Serangoon Road. He ran into some very good luck because Mani started correctly predicting the outcomes of 2010 FIFA World Cup Series that was then going on.

Very amazingly, when all its predictions started coming true, people started standing at his table in long queues for their turn. They even started betting between themselves on Mani’s predictions with huge sums of stake money which made its owner a very rich man in a remarkably short span of time. His consultation fee went up from a modest five dollars to fifty and then even to five hundred as Mani very correctly predicted the results all through the quarter finals and the semifinals between Spain and Germany.

The minuscule Mani became a world known phenomenon in a matter of days, taking his owner’s popularity sky high along with its own while its counterpart Muni, now in complete unemployment, watched in envy! At one point on 5th July 2010, a day before the Uruguay-Netherlands semi-final match, Mani topped Google’s Hot Searches list! This most amazing show went on very well until Mani, perhaps in a fit of overconfidence, went wrong in predicting the results of the finals that was played between Spain and Netherlands when it predicted Netherlands as the winner of the series and fell from grace!

The amazing story of Mani is closely linked to the story of Paul the male octopus from Germany, half way round the globe, which beat Mani at the game and predicted the results of the series with 100 percent accuracy. This event actually converted the FIFA World Cup tournament into a Parrot Vs Octopus showdown!

Unfortunately, Paul which as a mere baby, had also accurately predicted the results of Germany’s six EURO 2008 matches had a very short life of just two years and it died suddenly on 26th January, 2010, soon after its sterling performance, exactly on the date it was born! Thankfully, Mani which was hatched in 1997 and is now aged twenty-four, is alive and doing well and is still available for consultation!

Incidentally, it is interesting to note that Mani, Muni and Paul are all male creatures with uncanny vision. While this seems so fair in the case of the birds and the beasts, I do not understand why in the case of humans it is the female of the species which has been so dangerously endowed with all the insight and intuition, making it men’s biggest misfortune!