Home » News » Minister flooded with requests to save Lakes 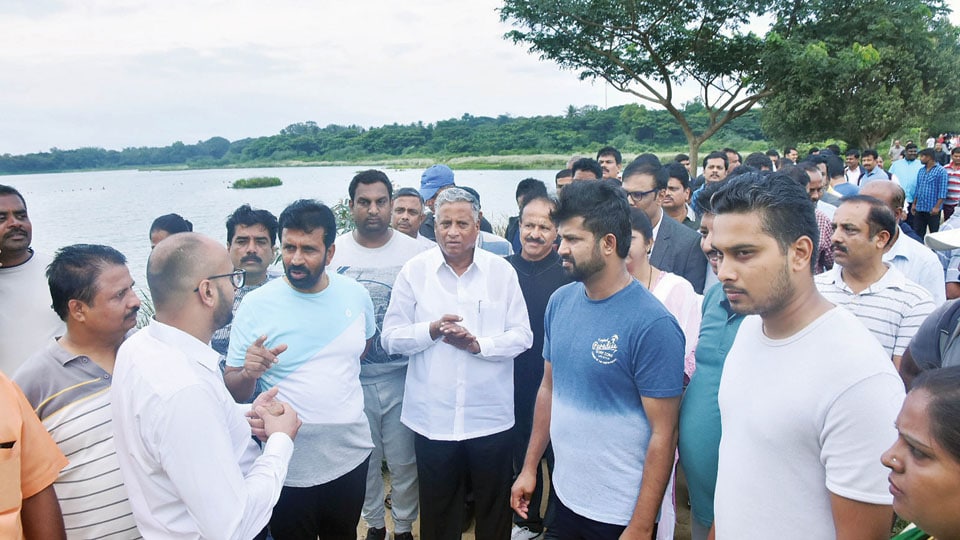 Minister flooded with requests to save Lakes

Mysuru: On November 22, 2018, the then Tourism Minister S.R. Mahesh visited the Kukkarahalli Lake early in the morning along with a battery of officials and interacted with walkers and environmentalists. He promised development works under a budgetary allocation  of Rs. 2.9 crore.

This morning, the Lake saw one more VVIP visit as Mysuru District Minister V. Somanna landed at the University entrance of the picturesque Lake at 6.30 am. The Minister was accompanied by a host of leaders including MP Pratap Simha and MLA L. Nagendra. Officials also joined him.

However, none of the above projects were implemented and much water has flowed under the bridge. Today again Minister Somanna promised the development of the lake and conserve it as a lung space.

Interacting with walkers, Somanna said that efforts will be launched to conserve all the Lakes of Mysuru including Kukkarahalli and Karanji Lakes. The walkers told the Minister that the Lakes of Mysuru were in a pathetic condition and needed urgent intervention. They said that sewage continues to flow into Kukkarahalli Lake from surrounding residential areas despite promises by University of Mysore that is the custodian of the Lake.

Walkers complained that the Fish Marketing Federation Outlet behind Crawford Hall sells fish fries and other eatables creating a nuisance, smell and dirt in the area. The outlet has permission only to sell fresh fish and not cooked items. Somanna asked the University officials to immediately stop the outlet from selling fried fish.

“Soon after Oct. 8 after Vijayadashami, my focus will be on the Lakes of Mysuru and I will ensure that the green space is maintained and the lakes are brought back to life.

The ecosystem of the lakes will be preserved and no illegalities will be allowed. I have already discussed with MP Pratap Simha, Chamaraja MLA L. Nagendra to step up efforts to save Kukkarahalli Lake. I will discuss Karanji Lake and Lingambudhi Lake with Krishnaraja MLA S.A. Ramdas,” Somanna said.