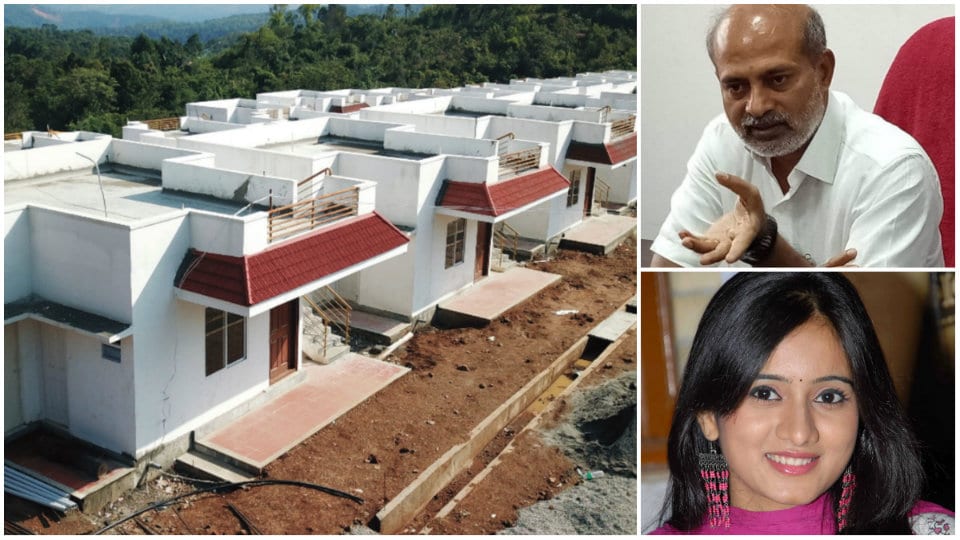 Mysore: During the Mandya Lok Sabha constituency election, Chief Minister H.D. Kumaraswamy had asked, ‘There is someone called ‘D Boss’, who is this ‘D Boss’ questioning Challenging Star Darshan’s role in the elections as he had campaigned for Sumalatha Ambarish. Now, it is the turn of Tourism and Kodagu District in-charge Minister S.R. Mahesh to ask, “Who is this actor Harshika Poonacha to question about the quality of houses built for Kodagu flood victims?”

There is a movement building up in Kodagu for a super-speciality hospital. Including Mysuru-Kodagu MP Pratap Simha, several film stars like V. Ravichandran, Shivrajkumar, Disha Poovaiah and Bhuvan Poovanna and a host of other actors have supported the cause.

Similarly, actor Harshika Poonacha has also expressed her support for the super-speciality hospital. At the same time she has also questioned the quality of construction of the houses by the State Government for the flood victims.  Reacting to this objection by the actor, Minister S.R. Mahesh asked who Harshika is. “She is just an actor. Her job is to act only in films and not to question anything else. What does she know about the houses constructed for the flood victims? Without understanding the ground realities she should not talk like an expert. We need not learn anything from her,” he said.

Already efforts are on to upgrade the Kodagu District Hospital at a cost of Rs. 100 crore. There will be more facilities available at the District Hospital than even in a super-speciality hospital. There is no need for Harshika to join any movement just for publicity, Mahesh remarked. He also sought to know her educational background.

READ ALSO  Is there an end to Kodagu’s flood misery ?

Harshika has, however, not taken it lying down to these comments. She shot back, “I am an engineering graduate who passed with distinction. As a citizen of the country and daughter of Kodagu, I have every right to question the quality of houses the government had built for the flood victims. I have seen the houses. They look like tin sheds and the ventilation in these structures was very poor. My only request is for the government to build houses that do not hurt the self-respect of the victims.”

Continuing, Harshika said, “I have raised this issue as a Kodava. The Minister should know that many a cinema artiste has enjoyed successful careers in politics – Union Minister Smriti Irani, former Tamil Nadu Chief Minister J Jayalalithaa to name just two. I request the minister not to take us cinema artistes lightly. We have seen what film stars are capable of doing and this was illustrated in the recent Mandya Lok Sabha election. Hence, it is not right to have a low opinion of the film stars.”