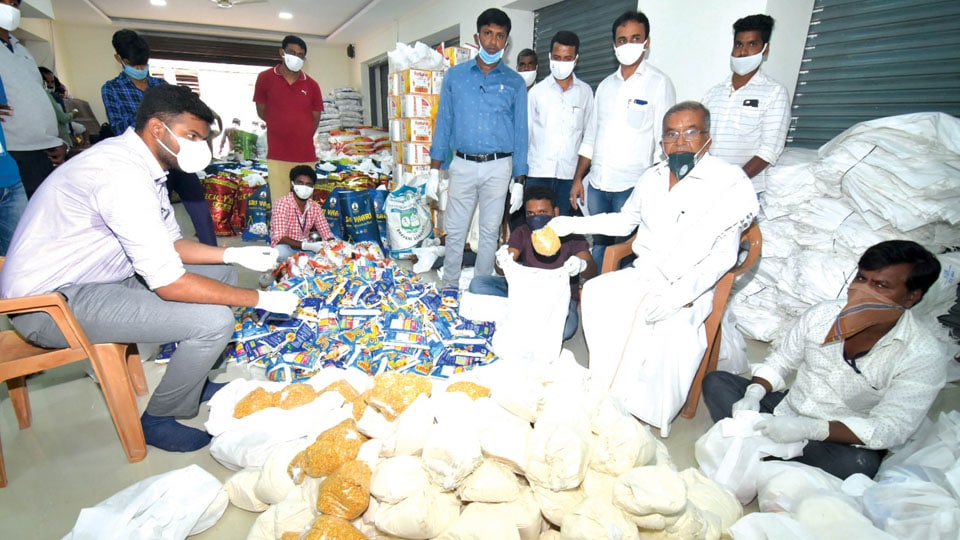 Mysore/Mysuru: With several people facing a lot of difficulty due to COVID-19 lockdown, Chamundeshwari MLA G.T. Devegowda (GTD) launched distribution of Ration Kits to poor families in his constituency who do not have any Ration Card, at MCDCC Bank premises on Ashoka Road on Tuesday.

Speaking on the occasion, he said that the Coronavirus pandemic is causing great havoc across the globe, pushing people to untold sufferings and miseries.

In this backdrop, the State Government, as a novel initiative, launched home delivery of two-month ration (April and May) in advance to Antyodaya, BPL and APL Card holders. But there are many families in his constituency that do not have any Cards. As such, he has taken the initiative to distribute ration articles to over 3,500 such families identified by officials and he has come to know that there are many others who are left out, he said and added that he aims to distribute 5,000 Ration Kits to poor families and the needy in his constituency, for which he has contributed 10 tonnes of rice, four tonnes of tur dal, 3,000 litres of edible oil and three tonnes of wheat flour, while villagers of Gopalpura have contributed six tonnes each of ragi and rice. Also, 37,000 masks have been distributed.

Mysuru Tahsildar K.R. Rakshith said that 3,500 families in Chamudeshwari and 700 families in Varuna Assembly segments do not have Ration Cards. The Ration Kits are prepared using the grains donated by donors and the Taluk Administration has spent nothing for it, he pointed out.