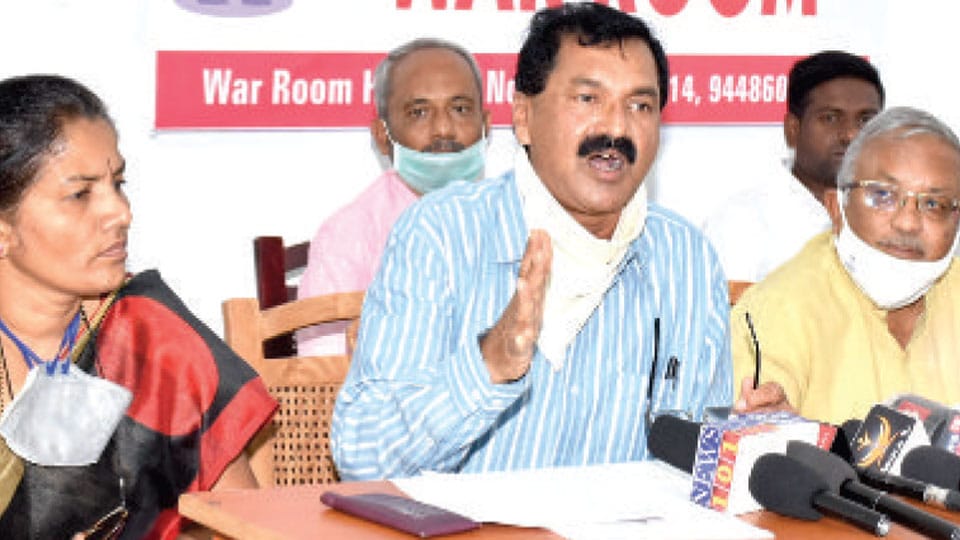 Mysore/Mysuru: The Kurubarahalli Survey No.4 land row that has been lingering for over five years is back in news. Days after Krishnaraja MLA S.A. Ramdas claiming that all hurdles for the vexed land issue have been cleared and even there is no case pending in the Court of Law, the Congress Party has ridiculed Ramdas for spreading lies and taking people for a ride when nothing has happened in the ground level.

The Party has given a deadline of one month for the State Government to remove ‘B-Kharab’ (Government land) classification of lands under Kurubarahalli Survey No.4 and Alanahalli Survey No. 41 and come to the rescue of over 25,000 property owners of Siddhartha Layout, Alanahalli, J.C. Nagar, K.C. Layout and Income Tax Layout.

“If the deadlock is not resolved within 30 days, Congress activists will stage protest in front of the houses of Ramdas and former BJP MLC G. Madhusudan. Ramdas is hiding facts and misleading people for cheap publicity,” said Congress Spokesperson M. Lakshman.

Addressing a press conference at Congress Office in city yesterday, Karnataka Pradesh Congress Committee Spokesperson Lakshman targeted Ramdas for lying to the people. “The Cabinet meeting held on Thursday resolved that all the B-Kharab lands must remain as B-Kharab lands across the State. Still Ramdas and BJP leader B.P. Manjunath and their party followers have wrongly claimed that the Kurubarahalli and other areas will be free from B-Kharab classification. Ramdas has shown the unofficial remarks made by Urban Development Under-Secretary to Revenue Department Under-Secretary as a proof to justify his claims. This is nothing but a joke on the people who have been suffering since years,” he said.

“On May 16, Ramdas had written a letter to Chief Minister B.S. Yediyurappa on freeing the 354.29 acres from B-Kharab classification and the CM had made a file noting to Revenue Department Under-Secretary to examine the facts and settle the issue. This is just an unofficial file noting which is not an official order. What Ramdas is saying is a bunch of lies,” Lakshman berated.

“Let Ramdas, Madhusudan and other BJP leaders come for an open discussion on K.R. Constituency and there we can discuss on various issues and it will become clear on who is telling lies and who has done sincere work,” he added.

The problem of B-Kharab classification was started when BJP was in power and when the then Mysuru Deputy Commissioner P.S. Vastrad passed an order to this effect and declared Kurubarahalli Survey No.4 and Alanahalli Survey Number 41 as B-Kharab.  “Then, the brother of MLA Ramdas owned lands worth crores of rupees at the foot of Chamundi Hill. Though this was a Government land, Ramdas exerted pressure on the BJP Government and the Mysuru DC and the lands were declared as private. This was objected to by the then MLC G. Madhusudan,” Lakshman said.

“Madhusudan held 20 press conferences then and kicked up a storm. He also raised the issue in the Upper House and drew the attention of the Government. As a result of this, the then Revenue Minister K.S. Eshwarappa directed the Mysuru DC to declare Kurubarahalli Survey No.4 and Alanahalli Survey Number 41  as B-Kharab. Later, 74 cases were filed in Karnataka High Court and three were filed in Supreme Court,” he revealed.

After Siddharamaiah came to power, he tried his best to save the residents and his Cabinet decided to drop the B-Kharab classification. “Both the Supreme Court and the High Court were informed about the Cabinet decision through the Advocate General. Now the present BJP Government has to just pass an order to remove the B-Kharab classification and the order has not been passed yet. Ramdas has lied to the people and misled them,” Lakshman said.

Congress Kurubarahalli Survey No.4 Kurubarahalli Sy. No. 4 S.A. Ramadas
‘I have just brought the present status before people’
Citizens can pay Property Tax at KarnatakaOne Centres too