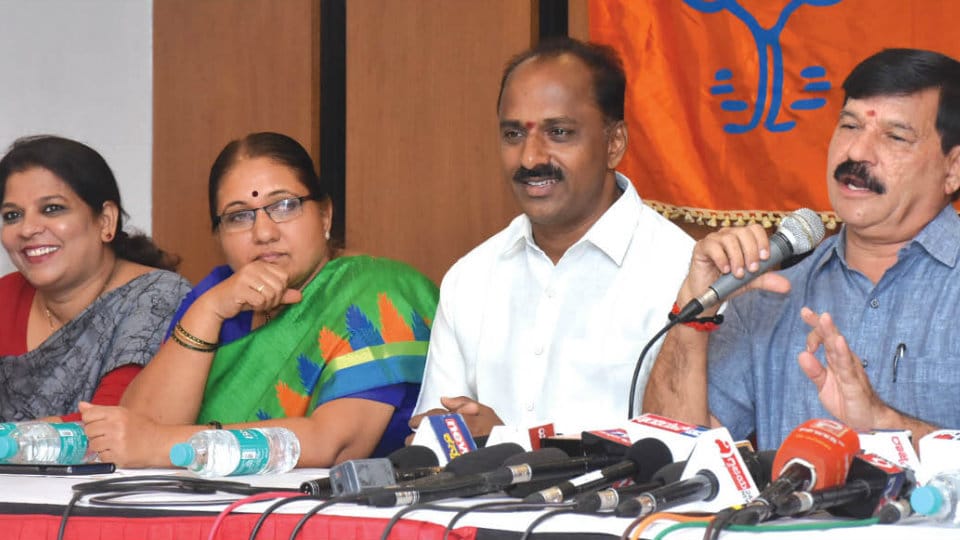 Mysore: Stating that the BJP has recorded an unprecedented victory in the just concluded Lok Sabha polls, KR MLA S.A. Ramdas has thanked the voters for their support to the BJP.

Addressing a thanksgiving press meet at Hotel The President on B.N. Road here this morning, Ramdas said that the KR Assembly segment, which he represents, gave the biggest margin of lead to Mysuru-Kodagu LS seat BJP candidate Pratap Simha.

Maintaining that all sections of the society, irrespective of caste, creed and religion, had voted for the BJP, Ramdas said that the BJP candidate got 1,46,691 votes from KR Assembly segment alone, which saw 177 NRIs and over 7,800 first time voters exercising their franchise.

Highlighting the party’s campaign in the run up to the LS polls, Ramdas said that he would soon launch a signature campaign to make voting mandatory.

Appealing the Government to make appropriate amendments to the representation of the peoples set for mandatory exercise of franchise, Ramdas said that the ‘Modi Wave’ across the country has wiped out the Opposition.

Ramdas further said that he would work for fulfilling PM Narendra Modi’s dream of ‘House for all,’ through his (Ramdas) Ashraya Scheme and also press the Government for health security, pension and other social benefits for labourers of the unorganised sector.

MLA Ramdas
Would not like to blame others for my defeat: Dhruvanarayan
Mild tremors cause panic in Kodagu villages