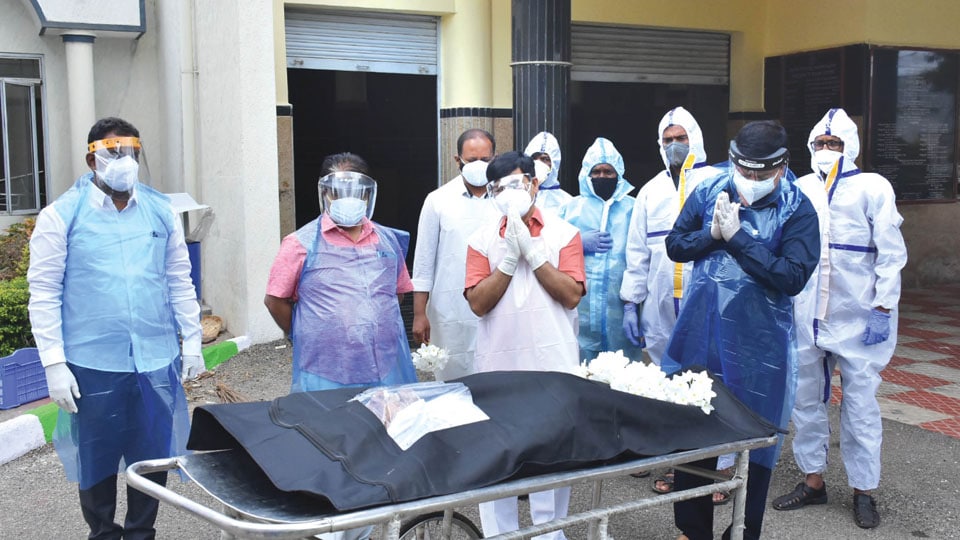 Mysore/Mysuru: With rising COVID case fatalities rate in the district, Krishnaraja (KR) MLA S.A. Ramdas, accompanied by heads of various Boards and Corporations who are put in charge of different COVID Task Forces, visited COVID-dedicated crematoriums in city yesterday and personally watched the process of the conduct of last rites of COVID-dead belonging to different communities.

Ramdas and others watched the last rites proceedings of the COVID-dead by wearing PPE kits and other safety gear.

Speaking on the occasion, Ramdas, who himself heads a COVID Task Force, expressed concern over rising caseload in the district in the second wave of the deadly pandemic. The District in-Charge Minister, taking note of this, formed Task Forces appointing the heads of a few Boards and Corporations as in-charge of them.

Noting that co-ordination between the Task Forces had resulted in the decline of case numbers, Ramdas lauded the efforts of crematorium workers in the last rites of the dead.

Pointing out that the workers of  crematoriums are doing excellent job in giving a dignified farewell to the COVID-dead, he said that these workers have displayed humanity by conducting last rites of the dead, irrespective of the religion or community they (dead) belonged to.

Jungle Lodges and Resorts (JLR) Chairman M. Appanna, who is in-charge of the Task Force for the conduct of last rites of COVID-dead, said that he has taken measures to ensure there is no delay in the conduct of the last rites.

Lauding the services of crematorium workers for their selfless labour, he said that the demand of the workers for an Insurance cover has been forwarded to the Government for consideration.

Pointing out that Suttur Mutt Seer Sri Shivarathri Deshikendra Swamiji and Jain Samaj have donated firewood for conduct of last rites of the dead, Appanna appealed donors too to come forward for donating the same.

MUDA Chairman H.V. Rajeev, who is in-charge of bed management, said that the last rites of the dead are being performed according to the rituals followed by the faith they belonged to.

Asserting that all the COVID-dead are being given a dignified farewell, he lauded the service of crematorium workers who are working round-the-clock.

Mysuru City Corporation (MCC) Statistical Officer Anil Christie, Ayub Ahmed (who is known for performing last rites of unclaimed bodies and now engaged in last rites of COVID-dead) and other crematorium staff were honoured on the occasion. Zoo Authority of Karnataka (ZAK) Chairman L.R. Mahadevaswamy, who is in-charge of ambulance service and others were present.