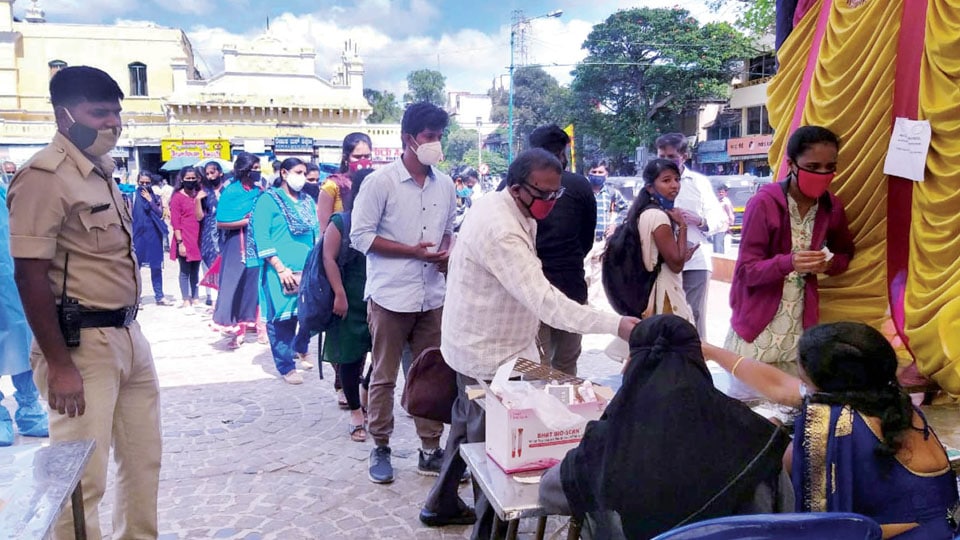 Mysore/Mysuru: A technical glitch at Indian Council of Medical Research (ICMR) server hit the RT-PCR testing in Mysuru city for over three hours today since 10 am. Non-generation of One Time Password (OTP) in the RT-PCR App had stopped COVID testing at all 23 centres in city.

A senior officer of Health Department told Star of Mysore that this matter had been brought to the notice of Delhi officials and the same had also been conveyed to National Informatics Centre (NIC), New Delhi which sought time to address this issue.

Since morning, a large number of students had gathered at Chikkagadiyara, Town Hall, K.R. Hospital and other locations to undergo free testing following instructions from their respective College managements to produce COVID-19 negative report at the time of attending offline classes. At Chikkagadiyara, token was issued to the waiting students to avoid rush after setting right the fault.

Meanwhile, Health Department has deployed five teams at Manasagangothri campus this morning following request from the University authorities to conduct RT-PCR test for over 700 teaching and non-teaching staff of various Departments. Five camps were set up inside the campus to conduct test. Five teams comprising three to four personnel in each team were posted in the campus to work in two shifts. “We have decided to complete testing of all teaching and non-teaching staff today,”  an officer on the condition of anonymity said.

An officer, who looks after RT-PCR test, told this paper that all students who have been tested in the last three to four days have tested ‘negative’. This was really good news as they can attend offline classes whenever it was held. Results of tests held today are likely to be available by Friday evening or Saturday morning.

In the wake of reports of not following social distancing at Chikkagadiyara and other testing centres, instruction had been given to make every student to wear face mask compulsorily and maintain social distancing.

Students have outnumbered the general public in undergoing RT-PCR test in order to attend offline classes from Monday.

Test result and consent letter from parents have been made mandatory for every final year student to attend offline classes. So, they turned up before the testing centres to undergo free testing done at 23 locations across the city. Two to three mobile testing squads have been deployed in Colleges for the sake of students, teaching and non-teaching staff.

One Student – One Teacher

Only one student turned up yesterday to attend classes, said Dr. B.T. Vijay, Principal, Maharani’s Arts College. He told SOM, “Four students of the total 673 final year students attended the classes today. On first day (Nov. 17), 50 attended and yesterday only one student turned up. But, our lecturer took the class for one girl. Since online classes are also held along with offline, many students have sought time till Sunday to get RT-PCR tested and mentally prepared to attend College from Nov. 23. Those who came to College without negative test report were sent back.”