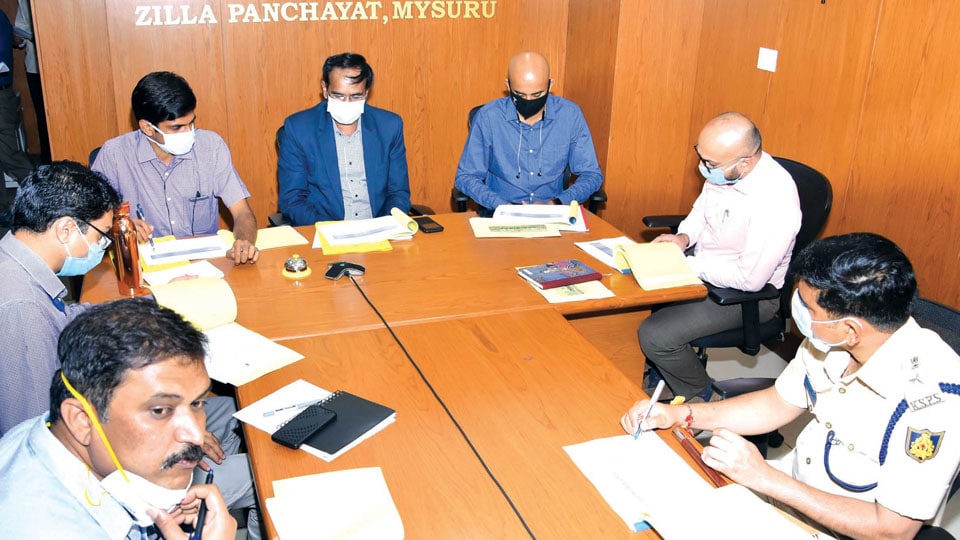 Mysore/Mysuru: With the threat of floods looming large in the wake of incessant rainfall across the district and catchment areas of rivers, District In-charge Secretary N. Jayaram directed officials to take immediate measures for protecting people and livestock from floods.

He was speaking at a meeting held on COVID-19 and Natural Disaster Management at ZP Hall here yesterday, during which he also held a video-conference with Task Force officials of all taluks.

Stating that heavy rains are predicted in the district in the next couple of weeks, Jayaram said that heavy rains may result in overflow of rivers. As such, the officials must take immediate measures for shifting people and livestock for safer locations.

Noting that District-level officials have been appointed as Nodal Officers at taluks, he said that these officers must personally tour the entire taluk for taking stock of the situation.

Stressing on the need for establishing Relief Camps and Goshalas wherever necessary, he said that it would be better if the land for Goshala is identified close to the village.

Pointing out that it is important to concentrate more on areas where water logging was more in the previous years, he said that the co-operation of the local MLA and MP must be sought for better management of the situation.

Stating that officials must give exact information on crop, property  losses and other damages caused by rains, he said that officials must ensure that COVID-19 and flood management tasks must not impede regular works that are being carried out in Taluk Offices. Jayaram also said  that no official should take leave other than for genuine reasons.

Pointing out that a man has been killed and 66 houses have been destroyed due to rains so far in the district this year, he said that flood alert has been issued in respect of Kabini and Lakshmanateertha rivers which are flowing close to the danger level.