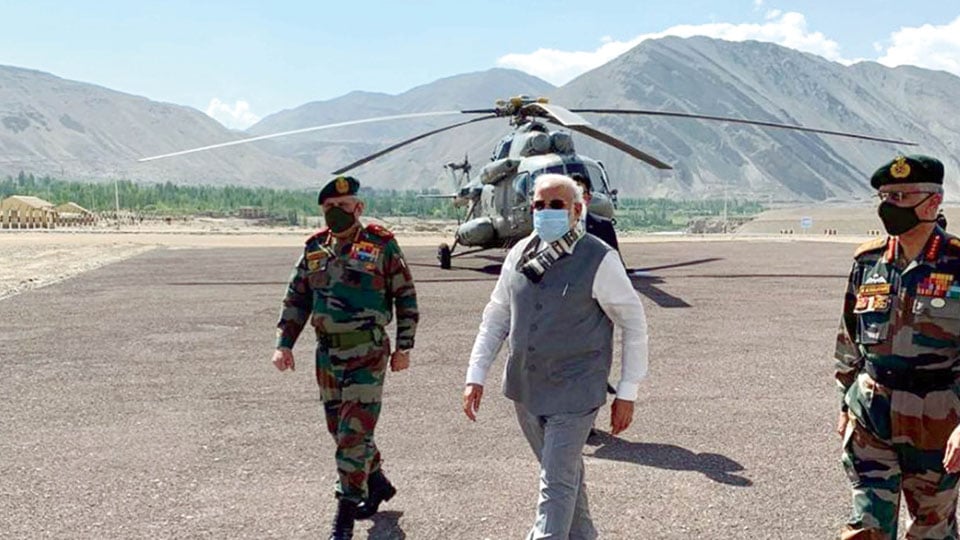 Ladakh/ New Delhi: Prime Minister Narendra Modi made an unannounced visit to a forward post in Ladakh this morning and interacted with troops days after the June 15 border clash with China in which 20 soldiers were killed in the line of duty.

The Prime Minister’s visit served as a morale booster for the forces and a powerful message to China, which has shown unrelenting aggression at the border with incursions spotted in satellite images. Chief of Defence Staff General Bipin Rawat and Army Chief M.M. Naravane accompanied the PM as he toured the region and met with soldiers.

PM Modi sat in a camouflage tent as he spoke to the troops seated at a distance from each other against the backdrop of the Himalayas. According to the Prime Minister’s Office, he was at a forward location in Nimu. He reached there early in the morning by chopper from Leh and will return later today.

“Interacting with our brave armed forces personnel at Nimu,” the PM posted, sharing a photo on his Instagram account. The PM picked a place where a large number of soldiers could assemble safely. Located at 11,000 feet, the region is among the world’s toughest terrains, surrounded by the Zanskar range and located on the banks of the river Indus.

Personnel of the Army, Air Force and ITBP were present for the interaction. PM Modi also visited a hospital where several soldiers wounded in the clash are recovering. After weeks of simmering tension at the Line of Actual Control or the de-facto border with China, 20 soldiers including a Colonel were killed in action in the June 15 brawl with Chinese troops at the Galwan river valley. Army sources say the Chinese suffered 45 casualties.