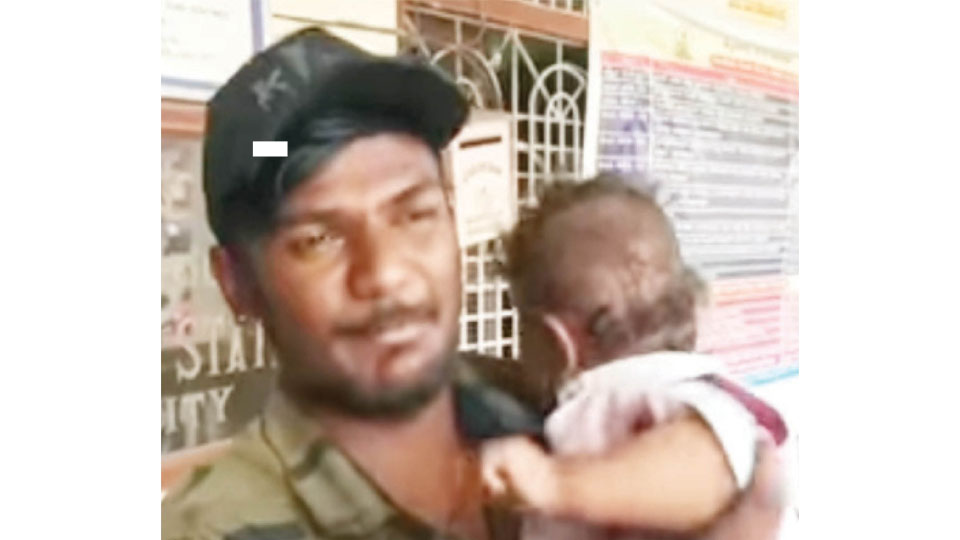 Mother ‘orphans’ her baby for lover

Mysore/Mysuru: The case of a woman handing over her nine-month-old baby boy to a passenger waiting for a Mysuru-bound bus at Raichur Bus Stand and fleeing from the spot, has taken a twist. It is revealed that the man, who brought the baby from Raichur to Mysuru, is actually the woman’s lover identified as B. Raghu.

In a bid to project the baby as an ‘orphan’ as the baby was hampering their relationship, Raghu brought the baby to Mysuru and handed over the baby boy to Lashkar Police after cooking up a story.

The woman, who had handed over the baby to Raghu, is 21-year-old Renuka alias Mamata, wife of Yesuraj, a painter by profession and a resident of Gundi village in Yadgir. Raghu is a resident of Nuralakuppe village in H.D. Kote taluk of Mysuru.

It is learnt that Raghu and Renuka came to know each other through Instagram about one-and-a-half years ago and fell in love with each other. Meanwhile, Renuka, delivered a baby boy about eight months ago and in a bid to lead a separate life, Raghu and Renuka had decided to do away with the baby by projecting it as an orphan. This was revealed during Police interrogation.

According to their plan, Raghu went to Raichur on May 8 and was waiting at Raichur Bus Stand to board a bus to Mysuru during which a woman handed over the baby boy to Raghu asking him to take care of the baby, till she returns from the rest room.

As the woman did not return even after three hours, Raghu boarded the bus to Mysuru, came to Lashkar Police Station on May 9 and handed over the baby. Lashkar Police in turn handed over the baby to District Child Protection unit. Following a complaint from N. Apekshitha, an officer at Vikasana Jogula Dattu Seva Samsthe, the special adoption centre at Kyathangere in Mandya, seeking action against the parents of the baby boy, Lashkar Police, who registered a case under IPC Section 317 (Exposure and abandonment of child under twelve years, by parent or person having care of it), began their investigation.

Meanwhile, Yesuraj, the husband of Renuka, had lodged a complaint at Yadgir Rural Police Station about his missing wife and baby boy.

Lashkar Police, who got the information, conducted investigation and grilled Raghu, who spilled the beans.

The Cops, who served a notice to Renuka and Raghu under Cr.PC 41A (Notice of appearance before Police Officer), held an enquiry and released them after taking a written statement.