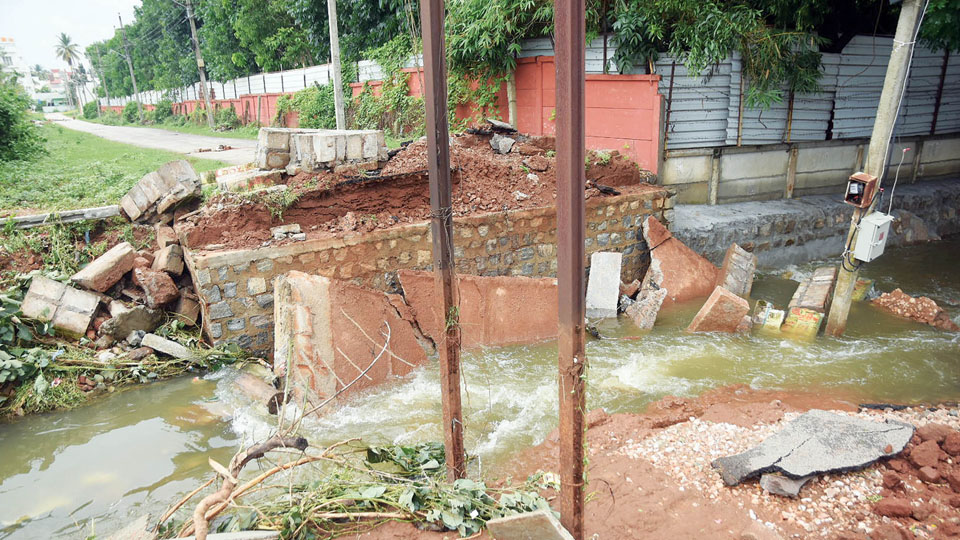 Mysore/Mysuru: A day after Bogadi Lake (Mariyappanakere) overflowed and a  road built over a storm water drain was washed away along with the culvert (minor bridge) near Nagalingeshwara Temple in Bogadi due to incessant rains, the Mysuru Urban Development Authority (MUDA) officials went on an inspection-spree in rain-hit areas.

Led by its Chairman H.V. Rajeev, the officials visited CFTRI Layout, Ashraya Layout, Ananda Nagar, Sharadadevi Nagar, Bogadi and the Lingambudhi Lake on the outskirts of the city this morning and carried out an inspection on the measures to be taken for preventing flooding of residential areas.

The officials inspected the storm water drain link through which water flows from Bogadi Lake to the vast Lingambudhi Lake whenever it rains heavily.

MUDA Chairman Rajeev told Star of Mysore that the MUDA is preparing a DPR (Detailed Project Report) for finding a permanent solution to the problem of rain water gushing into low-lying areas and entering households in surrounding localities.

Pointing out that the DPR will include plans on proper channeling of excess water, he said that the storm water drains and outlets will be so designed that storm water that enters the Lake from different localities, will be appropriately diverted without any flooding or damages in surrounding areas.

Noting that at the same time, water conservation will also be taken into consideration, Rajeev said that the plan will cover all aspects — prevention of  layouts from getting  flooded, lakes getting overflowed or breached and roads being washed away.

Rajeev also held discussions with DCF Kamala Karikalan, who too visited the spot, on the Social Forestry initiatives that can be implemented to save overflowing or breaching of lakes and flooding of residential areas.

Later in the noon, Mysuru-Kodagu MP Pratap Simha too joined the MUDA officials in the inspection of rain-hit areas.

They also visited the Lingambudhi Lake and held discussions over a comprehensive action plan for finding a long lasting  solution to flooding issues during rainy season. MUDA Commissioner G.T. Dineshkumar, Superintending Engineer Shankar, Executive Engineer Sunil and others were present.