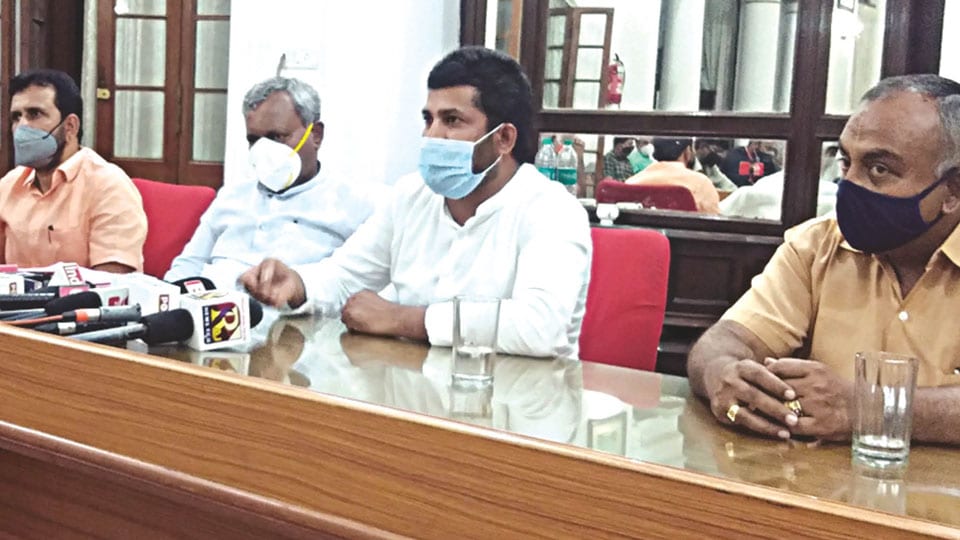 Mysore/Mysuru: In a bid to streamline oxygen supplies to both Government and Private Hospitals in the district and to ensure that needy COVID patients get Remdesivir injections easily, a District-level Task Force headed by Mysuru-Kodagu MP Pratap Simha has been formed.

A decision in this regard was taken at a meeting chaired by District In-Charge Minister S.T. Somashekar at Government Guest House in Nazarbad yesterday evening.

Later speaking to presspersons, Somashekar said that as per the decision taken at the meeting, all Hospitals will be directed to submit their oxygen demand for the next 10 days

Pointing out that Private Hospitals will be supplied oxygen as per the quota fixed on their demand, he said that Hospitals are directed not to increase their beds without prior permission of the Government.

Noting that  MP Pratap Simha will be fully in-charge of Oxygen and Remdesivir injection supplies, Somashekar said that a KAS Officer will be appointed as In-charge of COVID War Room.

Maintaining that oxygen refilling will be done under CCTV surveillance, he said that a KAS-level officer will monitor the refilling data. The oxygen re-filling data will be audited daily, he added.

He further said that all measures have been taken to ensure that Chamarajanagar-like tragedy does not recur in Mysuru.

Continuing, Somashekar said that a 100 oxygenated bed facility is being set up by MUDA at Seth Mohandas Tulasidas Hospital on JLB road, in which 10 beds will be reserved for Corona warriors.

Noting that preparations are underway for augmenting oxygenated beds at Beedi Workers Hospital on Mahadevapura Road and Super-Speciality Hospital on KRS road, he said that all possible measures will be taken to check the spread of the virus.

MP Pratap Simha said that many Private Hospitals used to call him midnight seeking his help for getting oxygen cylinders as they were running out of the vital gas, while some others wanted immediate delivery of Remdesivir injections. As such a Task Force headed by him has been formed for streamlining Oxygen and Remdesivir injection supplies in the district, he said and added that he will give his best for ensuring timely oxygen supplies to all Hospitals.