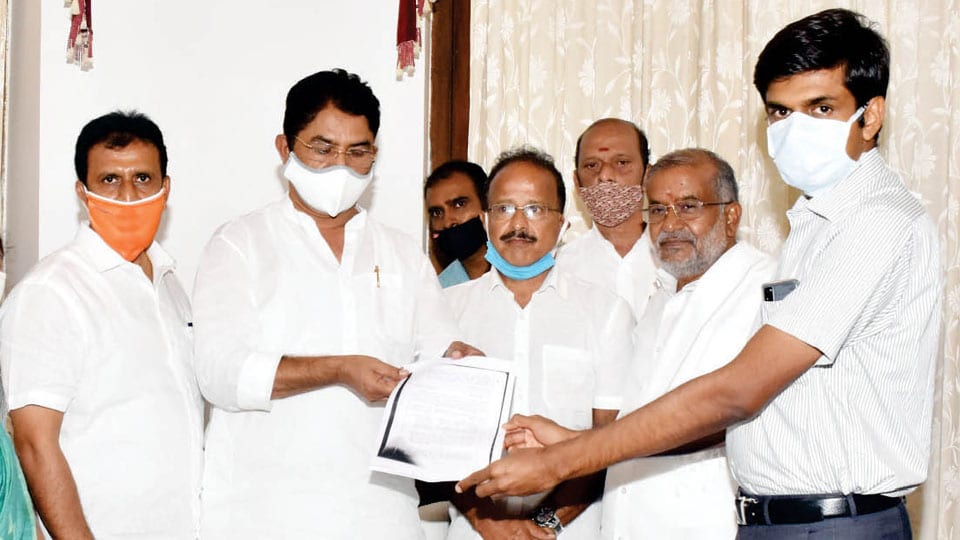 Mysore/Mysuru: After years of legal battle against the then Deputy Commissioner’s (DC) order on May 26, 2015, declaring lands coming under Kurubarahalli Survey No. 4 and Alanahalli Survey No.41 on which MUDA (formerly CITB) formed Siddartha, KC and JC Layouts as B-Kharab, meaning Government land, over 25,000 residents of these Layouts have heaved a sigh of relief, with Revenue Minister R. Ashoka handing over the Government Order on dropping the lands from B-Kharab classification, to the Deputy Commissioner at a meeting held at the Government Guest House here last evening.

Subsequent to the Government order, a total of 354.29 1/2 acres of land coming under Kurubarahalli Survey No.4 and Alanahalli Survey No.41, on which the three Layouts have been formed (Siddarthanagar – 205.09 ½ acres, K.C. Nagar – 105 acres and J.C. Nagar – 44.20 acres), will be handed over by the Revenue Department to Urban Development Department for executing the order.

The Urban Development Department, in turn, will hand over the lands to MUDA (Mysuru Urban Development Authority), which is now supposed to issue Title Deeds and all other withheld land records to property owners, once the DC issues an order lifting all restrictions on issuance of land records such as Khata, property tax stipulation, CR (Completion Report) and sanction of building plans.

On Mar.3, 2018, the then Congress Government headed by Siddharamaiah, in a Cabinet decision, had approved de-listing  of 354.29 ½ acres of land coming under Kurubarahalli Survey No.4 and Alanahalli Survey No.41 from B-Kharab classification and handing over of the said lands to MUDA for free, on which lands it (MUDA) had formed the three Layouts. The Cabinet then had also decided to bring to the notice of Karnataka High Court on a writ petition (No.26717/2015)and other related petitions that were pending before it, before the lands could be handed over to MUDA.

Later, the High Court on June 19, 2020, set aside the DC’s order of 2015, that had declared the lands coming under the two Survey Numbers as B-Kharab, while also ruling that B-Kharab classification be deleted wherever mentioned in the records. The Court also ordered issuance of mutation records in the name of the property owners.

Following the Court order, the Under Secretary of Revenue Department (Land Allotment-1)C. Balaram on July 14, 2020, issued an order stating that as per the High Court order, the B-Kharab classification in respect of 354.29 ½ acres of land collectively coming under Kurubarahalli Survey No.4 and Alanahalli Survey No.41, on which MUDA has formed Siddartha, KC and JC Layouts, have been deleted from B-Kharab classification and the said lands be handed over to Urban Development Department.

The Government Order has brought a big relief to over 25,000 property owners in these Layouts, who were severely inconvenienced as the Government had blocked issuance of all land records in respect of the landed properties. Besides the property owners could not either sell their properties or get loans from Banks for construction of homes and other buildings.

Even though some of the property owners got  temporary remedy from the Courts, the problem regarding de-listing from B-Kharab classification remained unsolved, following which the residents of the three Layouts formed an Association called ‘Kurubarahalli Survey No.4 Nivasigala Kshemabhivruddhi Sangha’ (Kururbarahalli Survey No.4 Residents Welfare Association), under the leadership of BJP leader and former KEA (Karnataka Exhibition Authority) Chairman B.P. Manjunath.

The Association had staged a number of protests in front of MUDA and also blocked Lalitha Mahal Road a number of times, seeking a permanent solution. Following a series of representations to people’s representatives, the then Government headed by Siddharamaiah in March 2018, took a Cabinet decision to drop Kurubarahalli Survey No.4  and Alanahalli Survey No.41 lands from B-Kharab classification. But due to official apathy, the Cabinet decision was not implemented.

Later H.D. Kumaraswamy became the Chief Minister in May 2018 and during his visit to Suttur Mutt, the aggrieved residents met him there and submitted a memorandum, urging him to address the issue at the earliest.

Now, with the Government passing an order on July 14, 2020, the long wait of the residents, who moved from pillar to post to get legal remedy, has ended, bringing them a big relief.

Siddharamaiah should be credited for solving the row, says former KR MLA Somashekar

Maintaining that Opposition Leader and former Chief Minister Siddharamaiah should get credit for resolving the long-standing Kurubarahalli Survey No.4 and Alanahalli Survey No.41 row, former K.R. MLA M.K. Somashekar said that it was Siddharamaiah as the CM in 2018, who took a Cabinet decision to free the lands coming under the two Survey Numbers, on which Siddarthanagar, J.C.Nagar and K.C.Nagar have come up, from B-Kharab classification.

In a press release, Soma-shekar blamed the previous BJP Government for the row. Maintaining that the then BJP Government’s decision had pushed thousands of residents of the three Layouts to a lot of hardship, he said that as an MLA earlier, he had taken up the cause of the residents with the Government.

Stating that he had held many public meetings and had even brought the DC before the people, Somashekar said he had taken a lot of pains to resolve the issue, visiting the Departments concerned and the Government a number of times.

He said that he had apprised the then CM Siddharamaiah on the plight of the residents, following which the Cabinet took a decision to delete B-Kharab classification. But even as the then Congress Government was getting ready to inform the Cabinet decision to the High Court, the Karnataka Assembly elections were announced, thus bringing an abrupt halt to the efforts of the Government  for getting a  clear Court order on deletion of lands coming under the two Survey numbers from B-Kharab classification.

Claiming that the row would not have ended now had the Siddharamaiah Government not taken a Cabinet decision, he said that he has a sense of fulfilment after having strived hard to end the longstanding row.

Thanking the residents and Associations for having extended their full support in his fight for the cause of Siddarthanagar, J.C.Nagar and K.C.Nagar residents, he said he is also grateful to the present Revenue Minister R. Ashoka for bringing the Government Order.

I have fulfilled the assurance given to residents: KR MLA S.A. Ramdas

Krishnaraja (KR) BJP MLA S.A. Ramdas, under whose Constituency Siddarthanagar, J.C. Nagar and K.C. Nagar come, said that with the Government issuing the Order, he has fulfilled his promise to the residents of the three Layouts.

In a press release issued yesterday, Ramdas said that as per the order, the three Layouts, formed on lands coming under Kurubarahalli Survey No.4 and Alanahalli Survey No.41, have been declared free from B-Kharab classification. Now, he will write to the Deputy Commissioner seeking to issue an order lifting the ban on issuance of Title Deeds and Mutation  from MUDA and as well as Khata registration, Khata extract, building plan approvals, Completion Reports, Property Tax fixation etc., from the MCC.

He thanked the residents of these Layouts who had waited patiently for over five years for the Government  to lift the ban. Lauding them for waging a legal battle to get justice, Ramdas said that he once again thanks all the residents who had  extended full co-operation, despite having suffered a lot of hardship and mental trauma, in his fight for finding an everlasting solution to the row.

Senior BJP leader and former KEA Chairman B.P. Manjunath, who was in the forefront of citizen protests seeking an end to the land row as  the President of Kurubarahalli Survey No.4 Residents Welfare Association, has expressed happiness that the row has met its logical end and the trauma of the residents too has ended.

Reflecting on the protests carried out by the residents of the three Layouts, he thanked former Editor-in-Chief of Star of Mysore K.B.Ganapathy, senior advocates O. Sham Bhat, Harish Kumar Hegde and S. Arun Kumar, Prakash Jain of  Jain Association, Corporators Mahadevamma and Vanitha Prasanna, office-bearers of Ittigegud Tax-Payers Association and residents of Siddarthanagar, J.C.Nagar, K.C. Nagar and Income-Tax Layouts for their unstinted support     over the years.

Pointing out that MLAs S.A. Ramdas and L. Nagendra, MP Pratap Simha and other people’s representatives had exerted pressure on the Government for ending the longstanding row, Manjunath said that he was grateful to all of them for the row having ended now.

Noting that thousands of residents were left to a lot of hardship because of B-Kharab classification, he said that MLAs Ramdas, Nagendra and MP Pratap Simha had exerted continuous pressure on the Government to end the row.

Pointing out that District Minister S.T. Somashekar too had played a vital role by raising the issue a number of times during Cabinet meetings, Srivatsa said that he was thankful to all these leaders for their concerted  efforts.

Maintaining that the order issued by  CM Yediyurappa and Revenue Minister Ashoka has brought peace to the minds of the residents of the three Layouts, Srivatsa said that he was also thankful to both of them for ordering issuance of Caste Certificates to Brahmin Community members.